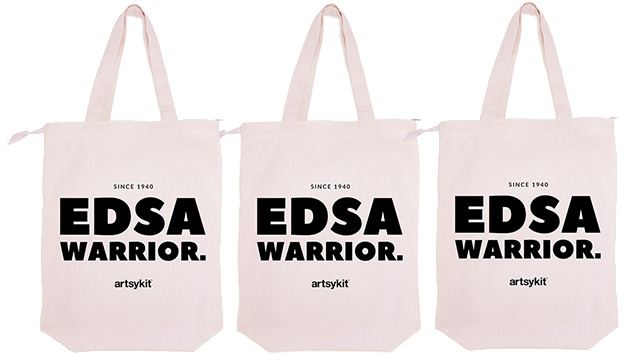 Hit the Streets With This Cool "EDSA Warrior" Tote Bag

For the next time you're on EDSA.

(SPOT.ph) Yesterday, April 1, the President addressed the nation, vehemently stating that he has ordered police and military, amid the current enhanced community qurantine, that if citizens should become unruly, armed forces should "shoot them dead"—and unfortunately, it wasn't an April Fool's joke. Following the impromptu address on Wednesday night, the hashtags #OustDuterte and #OustDuterteNow began to trend on Twitter all over the Philippines and eventually worldwide, with many foreseeing a mass insurgency like the first and second People Power revolutions, both of which historically took place along EDSA in 1986 and 2001, respectively.

With the government still unclear about the allocation of the P275 billion worth of emergency funds for the COVID-19 pandemic, the future remains uncertain, any concrete improvement still far out of our grasp. That being said, if you're one of many who want to make a statement, you might like this Artsy Kit tote bag!

The simple canvas tote features the phrase "EDSA warrior" printed on the front in bold black letters. It was designed as a tongue-in-cheek nod to the commuters and motorists who normally go through hellish traffic every day, but with a clear allusion to EDSA's history as a place that welcomes protest, subversion, and resistance.

Either way, we're pretty sure we've all experienced being an EDSA warrior in one way or another.

Shopping Savvy Adventurer Seasoned Tpc-000001 Tote Bags Artsy Kit New Normal Shopping
Your Guide to Thriving in This Strange New World
Staying
In? What to watch, what to eat, and where to shop from home
OR
Heading
Out? What you need to know to stay safe when heading out