Where to Buy Kodak M35 Reusable Film Cameras in Cute Colors
Loading
Already a member? Log in
No account yet? Create Account
Spot.ph is your one-stop urban lifestyle guide to the best of Manila. 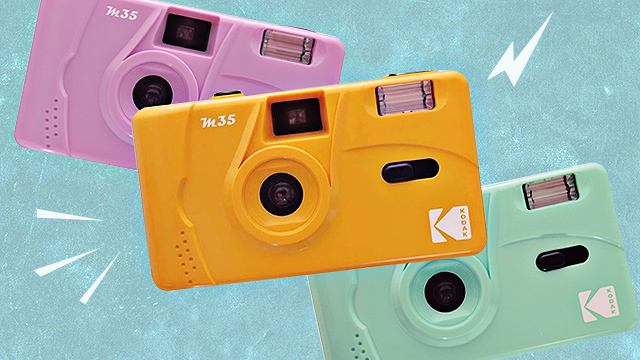 You Can Get These Film Cameras in the Cutest Colors for Under P1,000

Nail that grainy effect for your photos.

With the arrival of smartphones, we are able to take pictures, instantly see what they look like, and upload them online for all the world to see. There is, however, a certain charm that comes with snapping photos using a point-and-shoot film camera. Aside from scoring that grainy effect that we can only try to replicate on our digital photos using certain apps, using a film camera also encourages us to just have fun with it, since we can't see the photos until they're developed.

The only problem is, throughout the years, the prices of vintage film cameras have bumped up, ranging from P2,500 to almost P10,000 for certain models. While disposable cameras are a good option, they aren't that environmentally friendly since they're tossed out after the film roll is used up. Here's a good deal if you want to get into film photography without breaking the bank: We found a reusable film camera that costs less than P1,000!

The Kodak M35 film camera has a fixed focus lens, manual film winding, and a button for the flash option. It only uses one AAA battery. Unlike its disposable counterpart, you can simply load another 35mm film roll inside once you've used up the current one!

Another thing we love about this camera? It comes in the cutest colors like yellow, mint green, and purple! Check them out below:

You can purchase the Kodak M35 reusable film camera on Store.shkwowo Shopee store for only P899 (camera only) or P999 (includes one film roll).

Syn-00263 Syndication Adventurer Film Cameras Photography Heading Out Camera Shopping Online Shopping Affiliate Staying In
Your Guide to Thriving in This Strange New World
Staying
In? What to watch, what to eat, and where to shop from home
OR
Heading
Out? What you need to know to stay safe when heading out