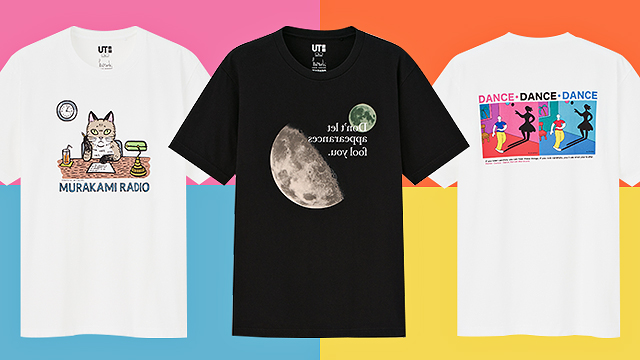 Norwegian Wood, 1Q84, Kafka on the Shore, and more!

(SPOT.ph) Though Uniqlo is best known for their fuss-free minimalist apparel, the Japanese retail giant also loves to celebrate pop culture with the quirky styles featured in their Uniqlo UT line. UT is an ever-growing selection of T-shirts that pay homage to cultural figures like Mickey Mouse and Hello Kitty as well as popular commodities like Nissin Cup Noodles and Tabasco and even artists like Billie Eilish. Their latest collection is made especially for all the bookworms out there: Uniqlo is releasing a Haruki Murakami Collection—and yes, it will be available in the Philippines very soon!

The collection includes eight T-shirts—six inspired by Murakami's famous novels and two paying homage to the radio show he hosts and produces. Each tee retails for just P790 and book lovers, you'll want to collect them all!

Perhaps the first Murakami work that would come to mind when you imagine a collection celebrating his writing is the bestselling 1Q84—it's hard to miss the hefty book and its eye-catching cover when you hit up your local book store. The tee modeled after the popular novel shows a moon on the front with the phrase "Don't let appearances fool you," printed out in mirrored lettering. The book's title as well as Murakami's name can be seen on the back.

1988's Dance Dance Dance is another Murakami novel commemorated in this collection and the crisp white T-shirt inspired by it sports a front pocket with a stylized illustration of a man and his shadow. The back of the tee shows a larger, more colorful version of the sketch complete with the title of the book and a quote from it printed underneath.

The silhouette of a bird can be seen on both sides of this Kafka on the Shore-inspired T-shirt. The 2002 novel, which uses interrelated plots, tells the stories of an unnamed narrator who runs away from home as well as of a protagonist who uses his uncanny abilities to find lost cats. The bird featured on the tee likely refers to the former's alter ego, "The boy named Crow."

One of Murakami's earliest works, Pinball, 1973, is the second book in the Trilogy of the Rat series and centers around the narrator's brief obsession with Pinball and his efforts to later return to the game. The T-shirt inspired by the novel is modeled after one of its early cover designs.

2001's Sputnik Sweetheart is the basis for another tee in this line and the front of the piece shows the title of the novel in stylized lettering. The back, on the other hand, pays homage to the novel's first-edition cover design, placing it just under a quote that reads "Understanding is but the sum of our misunderstandings."

No Haruki Murakami-inspired collection would be complete without a mention of Norwegian Wood. The 1987 novel launched Murakami into superstardom, especially among Japanese youths at the time of the novel's release. To this day, it remains a popular choice among young readers. Uniqlo's collection includes a green T-shirt with the title of the work and the author's name stitched onto the front in red.

Aside from his world-famous novels, Murakami is also known for the popular radio program Murakami Radio, in which he chooses the music himself and even hosts the show. The collection features two tees inspired by the broadcast.

The Uniqlo UT x Haruki Murakami Collection will be available at Uniqlo stores nationwide and on Uniqlo's website starting March 22.

Uniqlo Uniqlo Ut Shopping Heading Out Savvy Adventurer Seasoned Online Shopping Haruki Murakami Topspot Shopping Uniqlo X Haruki Murakami
Your Guide to Thriving in This Strange New World
Staying
In? What to watch, what to eat, and where to shop from home
OR
Heading
Out? What you need to know to stay safe when heading out