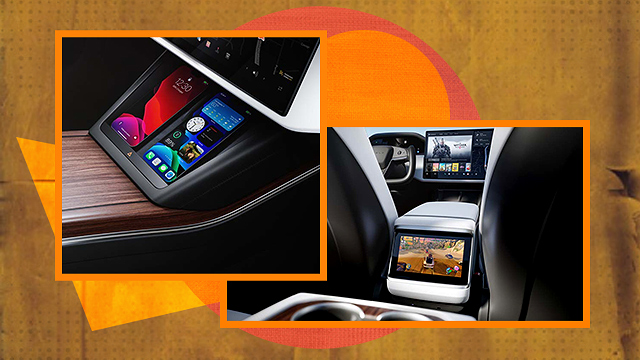 These New In-Car Entertainment Features Are the Future

Playing games in a car? Count us in!

(SPOT.ph) By now, every car owner is probably dreaming of planning a long road trip to somewhere with family members and friends in tow. That means having to spend a lot more time in the car. While most current generation in-car entertainment systems can handle basic duties such as playing music and connecting to smartphones just fine, road trips are about to become a lot more exciting.

Car companies are starting to step up when it comes to developing advanced in-car entertainment systems. Leading the pack is no other than Tesla, a car company known for its various innovations in developing electric vehicles. At this year’s Computex computer expo, chipmaker AMD revealed that it will be providing the CPU and graphics chip that power Tesla’s newest-generation infotainment system. Because of the new AMD chips, Tesla’s in-dash system has the same power that’s equivalent to a high-end gaming PC.

The first to have this new system is the 2021 Tesla Model S Plaid high-performance electric sedan. The new Model S was introduced on June 10 at a livestream event where Elon Musk boldly declared that the new system can play Cyberpunk 2077, a very graphically demanding PC game that was released late 2020.

At the center of the car’s dashboard is a massive 17-inch touchscreen with 2200x1300 pixel resolution. There is also a smaller secondary eight-inch screen for the rear passengers. A rocking 22-speaker, 960-watt surround sound system designed by Tesla delivers immersive audio. Tesla’s system features an all-new user interface with improved gestures and the option for added on-screen customization. As with most Tesla vehicles, the same touchscreen is used to adjust vehicle settings, display important information, and the GPS.

Tesla claims that the new infotainment system has the same power as a PlayStation 5. Apart from Cyberpunk 2077, the system can also play other games like The Witcher 3. Previous games from the Tesla arcade such as Fallout Shelter, Beach Buggy 2, Cuphead, Cat Quest and more are also playable. A new Tesla-branded controller will also be available.

While Tesla is leading the charge, other mainstream car manufacturers are also about to catch up. Toyota Motor North America also announced in June that it will be releasing its next-generation multimedia system. Development of the new in-house multimedia system started in 2018 with over 400 people involved in the project. The new system is designed to work on touchscreens from eight to 14 inches with physical controls such as volume knob. Compared to the previous generation, the system has five times the processing power with smartphone-like capability.

The new system will have enhanced navigation that’s integrated with Google’s point of interest data. The navigation system can work both offline and online and responds to voice-activated commands. The maps can also be downloaded in case there’s no signal in the area.

An onboard Virtual Assistant with natural language recognition will respond to user commands similar to a smartphone-based voice assistant. User profile settings saved and stored in the cloud adds to the personalization and can even be downloaded to other vehicles with the same system.

In addition to the user profile feature, the Digital Key allows users to access their vehicle using just a smartphone. Users can also start and stop their car using the Toyota or Lexus app. In case someone else needs to use the vehicle, the Digital Key can also be shared with several authorized users.

Regular updates will be made available via the Over-the-Air system. Vehicle owners can now update their vehicle software in real-time via the cloud. Since the system is online, owners can also receive service and maintenance reminders in a more timely manner. A Safety Connect system which is available 24/7 also gives peace of mind by connecting users with an emergency response agent in case they require further assistance.

For existing car owners, there are also upgrades that are available that don't require the purchase of a new vehicle. Spotify has released the Car Thing, a standalone smart player device. The Car Thing can be mounted on the car’s air-conditioning vent and connects to a phone with a Spotify premium account. This tiny head unit has a small 3.9-inch touch screen for displaying album art and a dedicated control dial on the side. The Car Thing can also be controlled via voice commands. When a phone is connected, it can also display information such as incoming calls, navigation, and notifications.

Browsing through Spotify’s audio content can be done in three ways. The touch screen and dial let’s users quickly browse, pause or play, and search. Four built-in mics make sure that the Car Thing understands voice commands well by saying “Hey Spotify” to get its attention. Currently only available in the U.S., the Car Thing is free to most Spotify premium subscribers on a limited release basis. Hopefully, it will get released to other regions too, including the Philippines.

Another in-car entertainment system worth checking out is the Echo Auto from Amazon. This small device brings the Alexa experience to cars. The Echo Auto connects to a phone’s Amazon app and the car’s audio system via Bluetooth. The small 3-inch device can be mounted on a car’s aircon vents. The Echo Auto has the same capabilities as a home-based Echo device minus the built-in speakers. Users can access news, audiobooks, podcasts, and streaming services such as Spotify, Apple Music, Amazon Music et cetera. via the Echo Auto and pipe it directly to the car’s sound system. An eight-microphone array which helps the device hear a user’s voice clearly over traffic, engine sounds, and other ambient noise.

Smart Speakers Adventurer Savvy Seasoned Gadgets Staying In Con-00263 Tech Greener Guide Online Shopping Shopping
Your Guide to Thriving in This Strange New World
Staying
In? What to watch, what to eat, and where to shop from home
OR
Heading
Out? What you need to know to stay safe when heading out