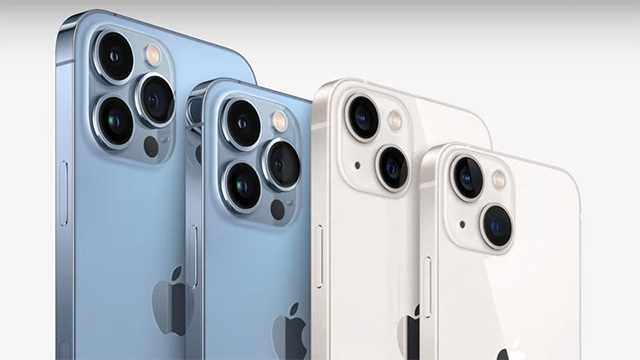 It's Official: Say Hello to the iPhone 13

(SPOT.ph) After months of leaks, rumors, and speculations surrounding the highly anticipated (but extremely confidential) release of Apple's next gadget lineup, the big reveal has finally arrived. On September 14, at around 10 a.m. Pacific Standard Time (that's today, September 15, 1 a.m. in the Philippines), the 2021 Apple Event officially took place. The star of the show? Without a doubt, it was the latest addition to their world famous smartphone lineup. That's right, folks: The iPhone 13 is here.

Here's your first look at the iPhone 13:

Every phone in the iPhone 13 series is equipped with an A15 bionic chip that promises smoother performance and more power efficiency. According to Apple, the new models are about 50% faster than leading smartphones on the market. They also offer faster 5G capability and improved battery life with the 13 Mini and 13 Pro providing up to 1.5 more hours of use compared to the 12 Mini and 12 Pro, respectively and the flagship iPhone 13 as well as the 13 Pro Max lasting 2.5 hours longer than the iPhone 12 and 12 Pro Max, respectively.

Check out the other new gadgets Apple unveiled at their September 2021 Event:

Apple introduced a new and improved iPad built with an A13 bionic chip that’s made to provide performance that’s 20% faster than its predecessor. It also has an updated camera system with the front cam boasting 12 megapixels—perfect for video calls. The device is pre-installed with iPadOS 15 and starts at U.S. $329 (roughly P16,390) for the 64 GB model.

The predictions came true! Apple is releasing a brand-new iPad Mini. Much like the latest iPad models, the more compact iteration of the tablet sports an all-screen design. The ultra-slim device features an 8.3-inch screen with flat edges and a lock button built with Touch ID. Plus, it has 5G capability that promises download speeds up to 3.5 GBPS, a 12-megapixel camera that can record in 4K, and a 12-megapixel ultra-wide lens up front. Apple calls it the “most powerful and versatile” Mini yet. The new iPad Mini starts at U.S. $499 (roughly P24,858).

Almost exactly a year since the release of the Apple Watch Series 6 comes the Apple Watch Series 7. Built with the new and improved WatchOS 8, it's equipped with awesome features made especially for bikers. It can track your entire ride, detect your movements should you ever stop to take a break, and even monitor if you fall down. The Series 7 also sports a larger screen on a more rounded outer casing. The enlarged screen features larger, redesigned buttons and can fit 50% more text than its predecessor. Plus, the interface finally supports an on-screen keyboard for texting. It's also more durable with a crack-resistant screen, swim-proof design, IP6X dust-proof certification, and WR50 waterproof resistance. While still available in the same colors as previous models, the Series 7 will be available in five new shades: Midnight, Starlight, Green, Blue, and Product Red. It starts at U.S. $399 (P19,876).

Iphone Apple Savvy Adventurer Seasoned Shopping Staying In Gadgets Apple Watch Series 7 Iphone 13 Ipad Mini Ipad
Your Guide to Thriving in This Strange New World
Staying
In? What to watch, what to eat, and where to shop from home
OR
Heading
Out? What you need to know to stay safe when heading out