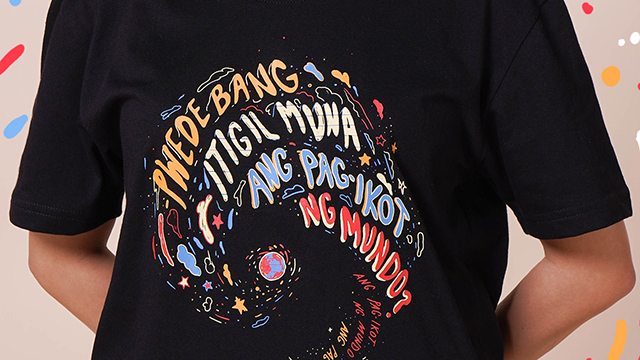 Crossing Your Fingers for an Eraserheads Reunion? This Cool Tee Is for You

It features a colorful graphic inspired by the song "Spoliarium."

(SPOT.ph) In late September, former Eraserheads frontman Ely Buendia took to Twitter for a live Q&A session with fans. When asked about the possibility of an Eheads reunion, the musician replied "pag tumakbo si Leni," referencing the current vice president Leonor "Leni" Robrodo who, at the time, had not yet declared her intention to run for president in the 2022 elections.

Well, on October 7, Robredo formally announced her candidacy. Naturally, fans put Buendia in the hot seat, wondering if he would stick to his word, though he admitted in a press conference that the tweet was a "half serious joke." However, by then the damage had been done and the possibility of a reunion from the '90s rock band (however unlikely) has reignited the Eraserheads fanbase's long-standing hopes. The longing for a comeback is palpable: Local brand Linya-Linya, known for their hilarious and sometimes provocative tees, just released a new Eraserheads T-shirt!

Linya-Linya unveiled the new unisex T-shirt on September 9, just two days after uploading a Facebook post speculating on a possible Eraserheads comeback and teasing the tee's release. The post was decked out in bright pink and captioned "So pano, tuloy na ba ang reunion?"

The new and limited-edition Linya-Linya x Eraserheads shirt was received with excited comments and reactions from Eheads fans. "Pwede bang itigil muna ang pag-ikot ng mundo?" reads the tee, in reference to the band's classic 1997 song "Spoliarium." It’s long been speculated that the enigmatic cut from the Sticker Happy album—with a title referencing Juan Luna’s magnum opus—was an allusion to and statement on the tragic death of '80s star Pepsi Paloma. Buendia debunked the urban legend in March, noting that the names "Enteng and Joey" mentioned in the song were the band’s roadies at the time and not a reference to the rape case filed by Paloma against two comedians and Richie D'Horsie in 1982.

Despite mixed reactions to Buendia's statement, the song remains a certified OPM classic and one of the band's most well-known hits—so Linya-Linya memorializing its famous lyrics on a T-shirt seems only right. The tee sports colorful illustrations inspired by outer space—likely to match the phrase "ang pag-ikot ng mundo," which is printed over and over in smaller text towards the bottom of the graphic. At the back, you'll spot the Eraserheads logo, reimagined in Linya-Linya's signature font style.

The Linya-Linya x Eraserheads Spoliarium T-shirt is available on their website, Lazada, and Shopee.