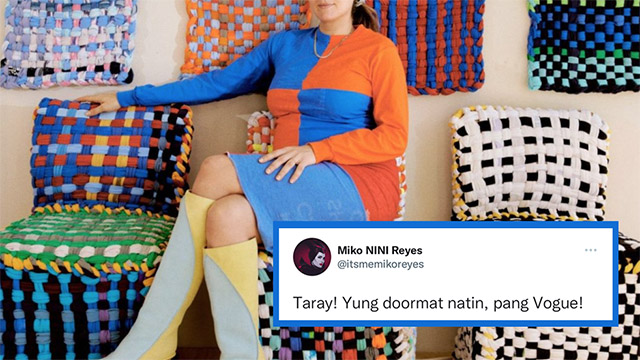 So Retaso Rugs Are on Vogue Now: Here’s What’s Going On

Filipinos had a lot to say about it.

(SPOT.ph) In the last 24 hours, the Internet on this side of the world has been ablaze with mostly political-rally videos along with some Oscar-nom reactions and interestingly, a seemingly innocuous article from American Vogue featuring New York-based artist Elise McMahon. Here's a quick rundown of what's going on: McMahon, founder of design studio LikeMindedObjects, is being lauded over in the Western world for her T-shirt Waste Loom. The artist created (and now sells) a large wooden frame that she uses to make 18x18-inch woven fabrics out of old T-shirts. Now, let's get out of the way what every Filipino on the TL is reacting to: McMahon's woven fabrics look pretty much identical to the humble retaso rug. Imagine the kind of rugs most Pinoys would have on their kitchen floors hanging like art pieces all over a brightly lit room—that's what you'll see on Vogue's article as well as on McMahon's Instagram page.

It's easy to see why Filipinos would have a strong reaction to this. These types of mats are neither a luxury nor necessarily an art piece in the Philippines, but rather a mundane part of everyday life as well as a primary source of income for lower-income families. They're typically made from excess fabric scraps (a.k.a. retaso) that are collected by factory workers who sew them together into mats or rugs. Though they're also made with sustainable practices, well, to put if bluntly, it's unexpected to see them on a publication like Vogue.

Here's how Filipino Twitter is reacting to Elise McMahon's woven fabrics, which are pretty much identical to retaso rugs:

Now, let's clarify a few things here: McMahon is not selling retaso rugs. On the LikeMindedObjects website, you'll find the T-shirt Waste Loom she developed (along with friend and textile artist Francesca Capone) in order to make the woven fabrics. The studio is is selling the loom in order to encourage Americans to recycle their own old T-shirts, turn them into usable fabrics, and keep them out of landfills. The loom is priced at U.S. $200 (roughly P10,281)—a luxury for most, especially compared to what factory workers and communities in the Philippines who make retaso rugs charge for them—and it's brought up some interesting conversations about sustainability and the commidification of it.

As Twitter user @yourtitakate points out, it’s become common for first-world countries to "take a concept or product that already exists or is being done by communities in the global south, build your brand on it, then charge hundreds or even thousands of dollars [for it],” thereby and profiting off of products that typically benefit those in lower economic brackets while also white-washing practices that have long been associated with people and communities outside of the global north.

Another Twitter user (@TATAMOCHII) notes that "we’ve been upcycling fabrics in the Philippines…it’d be great to feature the amazing Filipinos [who have been] doing these colorful designs for decades.”

User @AlyssaAshleyC further explored this point saying, "Imagine the success our marginalized sectors would achieve if they are only given the chance to showcase what they can do? Imagine if they are given the same opportunity to celebrate creativity for the community?" [sic]

There's a long and nuanced conversation to be had about sustainable products and practices: Who benefits from them? Who has access to them? And so on. While McMahon's $200 looms are a well-intentioned idea in theory, they're also a practice that many (even in the United States) won't be able to afford. Sustainability in any part of the world can be a good thing, but it's important to inspect and even be skeptical of brands and figures willing to not only commodify it at such exorbitant rates, but to do so without first learning about where such practices come from.

And if there's a final takeaway from this issue—which is one that's worth continually talking about—perhaps it's this: Maybe it's time to reframe our perspective on the humble retaso rug and the people who make them. The woven mats are not only soft, durable, and functional, but also inherently sustainable and beneficial to lower-income households. Perhaps they deserve more praise than we've been giving them all along.  It may be high time to laud the everyday Filipinos who have been making the retaso rugs we've used and relied on for decades—in the same way Vogue praises McMahon—long before sustainability was ever trendy.