Charice Pempengco, 18, returned to Oprah for the fourth time to launch her international self-titled debut album on May 11, two years after her first Oprah appearance that helped launch her into superstardom.

She told Oprah, "I'm really, really excited because this is actually my first pop-RnB album. I'd been singing Whitney Houston's and Celine Dion's songs, and now, I can't believe that these are my own songs."

"It [feels like a dream come true]. I didn't expect all of these. I just want to thank all the people who helped me and you are one of them. Thank you so much," she added.

The "hit maker" songwriter-producer David Foster also appeared on the show. Pempengco said, "I've learned a lot from David. He's always telling me that it has to be great."

To this, Foster said, "Good is the enemy of great and it applies to anything in life. Charice is like a laser beam and she looks to me for guidance. You tell her once and she gets it. But probably, the most extraordinary thing that has happened to Charice and me is that today, I got a letter from her asking me to be her godfather."

At the end of her performances, teen heartthrob and another Oprah guest for the day, Justin Bieber came out to sign a no-texting-while-driving pledge with Pempengco. Bieber, 16, just got his driver's license but Pempengco hasn't. Later, Bieber Tweeted, "Charice is amazing and a sweetheart too. I'm excited to get home tonight and watch the Oprah episode!!!" Pempengco replied, "thanks JBieber. :) you are a great person. :)" 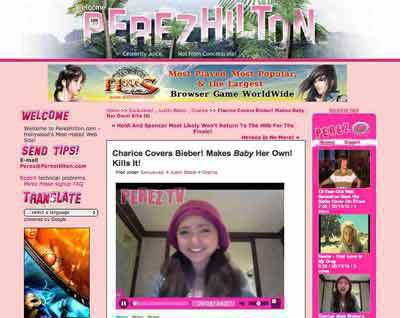 The next day, May 12, popular gossip blogger Perez Hilton posted an exclusive video of Charice singing her own version of Justin Bieber's  Baby. The controversial blogger called her rendition "spectacular" and "awesome."    "She can SING, naturally. But we even love her rap/breakdown towards the end!" he wrote.