Video of 6-year-old boy Jan-Jan crying while gyrating on Willing Willie goes viral
Loading
Already a member? Log in
No account yet? Create Account
Spot.ph is your one-stop urban lifestyle guide to the best of Manila. 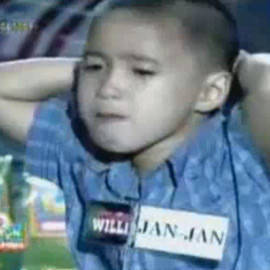 Child abuse or freedom of expression? This controversial video has sparked public outrage and intense debates online and otherwise.

(SPOT.ph) Going viral with over 290,000 hits on Youtube is a video of a six-year-old boy named Jan-Jan seen crying while gyrating on Willie Revillame’s TV-5 variety show Willing Willie. Uploaded March 12, the footage shows the crowd-including Jan-Jan’s aunt-laughing and clapping while the child repeatedly danced to the tune of Dr. Dre’s "The Next Episode."

Revillame then asked the boy to repeat his act and the former joined in. Afterwards, he gave Jan-Jan a P10,000 cash prize. He also compared Jan-Jan’s dancing to that in the movie Burlesk Queen, where the star also cries while gyrating onstage.

Reacting to the video, writer Benjamin Pimentel said in an Inquirer.net article, "Who wouldn't feel your blood boiling in your veins while watching that? I don't know why, but the clip of Jan-Jan just struck a nerve. Maybe because we know that when we let children be humiliated in front of millions of people, when we let them be subjected to that kind of torture, we somehow degrade our soul as a nation."

Inquirer columnist Cathy S. Babao Guballa also said in a letter posted online, "For me, the biggest fault that evening falls on Willie Revillame's shoulders. I have no explanation for what possessed him to egg on the crowd, to say those words to you, to liken you to a burlesk dancer. Willie had the power in that moment to stop, no, to prevent you from even performing your dance number. Had he done so, he may have even redeemed himself in a way."

She added, "That he (Revillame) found enjoyment in watching you, and poking fun at you as you cried and looked so miserable was to my mind inexcusable. You are a child, and you are supposed to be loved and protected. Your right to protection is provided for under the law. I am so sorry that we failed to do this for you."

Some Youtube users have also slammed the video while others called it "cute" and saw nothing wrong with it.

The past weekend, a complaint letter was uploaded on Facebook, "(condemning) the act of subjecting poor Filipinos to humiliation in shows... for some quick cash" and urging various organizations to act on the incident which they described as child abuse.

The signatories called for a "temporary moratorium on the guesting of children on Willing Willie and similar shows," for Revillame and the show to issue a public apology to Jan-Jan, and for the Movie and Television Review and Classification Board to review and "impose corresponding penalties on those found guilty" of violations, among others.

Uploaded on the Facebook page "Para kay Jan-jan (Shame on you Willie Revillame!)," the letter has supposedly been signed by film industry personalities Armida Siguion-Reyna, Carlitos Siguion-Reyna and Bibeth Orteza, among others. "(The letter) will be sent to the concerned agencies."

The letter was addressed to TV-5, and the Commission on Human Rights, Senate committee on Youth, Women and Family Relations, Department of Social Welfare and Development (DSWD), Movie and Television Review and Classification Board, Integrated Bar of The Philippines, Philippine Association of National Advertisers, Ad Standards Council, Ateneo Human Rights Center, and Council for the Welfare of Children.

This afternoon, DSWD Secretary Dinky Soliman posted on her Facebook account a statement "(condemning) the emotional abuse and humiliation bestowed on" Jan-Jan. She added that the Willing Willie incident is "clearly a violation of Republic Act 7610 or the Special Protection of Children Against Abuse, Exploitation and Discrimination Act, and a blatant manifestation of child abuse."

The DSWD has asked Manny Pangilinan, the head of ABC which runs TV-5, not to allow children to appear on shows like Willing Willie and rebuked the "insensitive actions and remarks" of Revillame. Soliman said they will also look for Jan-Jan to see if he and his family need counseling and stress debriefing.

Willing Willie Willierevillame Jan-janvideo Jan-janwillingwillie
Your Guide to Thriving in This Strange New World
Staying
In? What to watch, what to eat, and where to shop from home
OR
Heading
Out? What you need to know to stay safe when heading out