(SPOT.ph) Mideo Cruz, a performance and mixed media artist, was criticized by Church leaders for his unconventional use of religious figures in his exhibit at the Cultural Center of the Philippines, reports ABS-CBN News. Some of the pieces displayed in the exhibit were: a crucifix decorated with a phallic-shaped piece of wood and a figurine of Christ the King wearing rabbit ears.

"It is not only sick, it is also sickening. Binabastos mo 'yong pananampalataya ng iba (You are disrespecting other people's faith)," said retired Archbishop Oscar Cruz, adding in a Philippine Daily Inquirer report that "No one in his right mind with the proper value system would even think of doing such things. I wonder if those who did those desecrations would allow me to do those things to them." Meanwhile, Caloocan Bishop Deogracias Iñiguez, who is calling on people to boycott the exhibit, advised: "(The artist) should be sensitive and respectful of those who might see it. They should respect the religion of others."

Cruz, whose art has been featured in exhibits in Switzerland, Italy, and the United States, however, dismissed the criticism as inevitable. "Hindi mo maiiwasan na kapag nagpo-provoke ka o naglalabas ka ng ideya, e may mga tatamaan (When you provoke someone or you introduce an idea, you can't avoid affecting some people negatively)," he said. Cruz added that he has been receiving death threats because of his controversial style.

For more on this story, log on to ABS-CBN News and the Philippine Daily Inquirer. 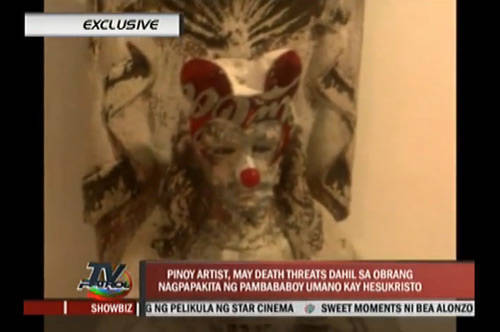 Click on photo to watch ABS-CBN’s report on Mideo Cruz.

Mideo Cruz Blasphemousart Sacrilegiousart Ccpexhibit
Your Guide to Thriving in This Strange New World
Staying
In? What to watch, what to eat, and where to shop from home
OR
Heading
Out? What you need to know to stay safe when heading out