Number of dengue cases double in Metro Manila in 2011, more than 10,000 cases reported to date
Loading
Already a member? Log in
No account yet? Create Account
Spot.ph is your one-stop urban lifestyle guide to the best of Manila.

Number of dengue cases double in Metro Manila in 2011, more than 10,000 cases reported to date

(SPOT.ph) With the number of dengue cases rising in Metro Manila this year, the Department of Health is initiating more methods to prevent its spread and to care for the afflicted, reports ABS-CBN News. Reports from ABS-CBN News and Bombo Radyo reveal that the number of dengue patients in the National Capital Region grew from 5,416 last year to 10,487 from January 1 up to August 2011 -with majority of the cases situated in the cities of Caloocan and Quezon. The DOH, which monitors Region 2, has reported an estimate of 3,000 dengue cases.

On Monday, August 21, 33 dengue hot spots will simultaneously be defogged. The DOH is also initiating free Dengue Rapid Tests for indigent citizens suspected of having dengue. The Dengue Rapid Test, which normally costs P700, is a 30-minute check up that can immediately confirm whether a victim has dengue.

Ironically, nationwide, the number of dengue cases dropped compared to the previous year. In a Manila Bulletin report published on August 10, National Epidemiology Center director Eric Tayag explained that, from January to April this year, there was a 31-percent increase in the whole country but in May up to July, there was a 64 percent decrease.

For more on this story, log on to ABS-CBN News, Bombo Radyo, and the Manila Bulletin. 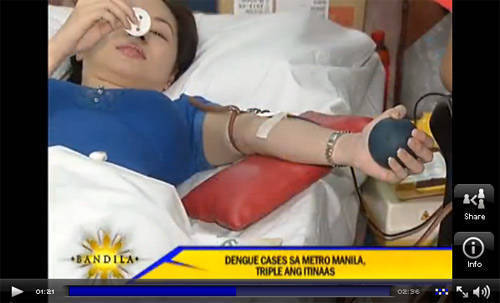 Dengue Cases Tripleddenguecases Dengueinmetromanila Decreasedengue
Your Guide to Thriving in This Strange New World
Staying
In? What to watch, what to eat, and where to shop from home
OR
Heading
Out? What you need to know to stay safe when heading out