P-Noy nearly runs into Shalani in Negros Oriental; calls Bais City mayor "beautiful" in speech
Loading
Already a member? Log in
No account yet? Create Account
Spot.ph is your one-stop urban lifestyle guide to the best of Manila. 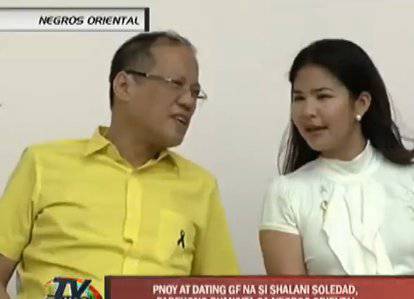 Being a bachelor president is a tough job-but somebody’s got to do it.

That being said, reporters noted that Aquino was accompanied by Bais Mayor Karen Villanueva, 31 and single, whom he later complimented in his speech before the city folk.

Speaking in the local dialect, Aquino said, "Before, when I was campaigning here, you may all remember that I said there are many beautiful women in Bais. But now I can really say that there are even more beautiful women here-the most beautiful one being Mayor Karen."

The TV Patrol report went on to say that the lady mayor is taking up law. Asked for a reaction to P-Noy’s compliment, she smiled and said, "Thank you for appreciating...but anything more than that...that’s part of the speech."

Villanueva then accompanied Aquino to Dumaguete City. TV Patrol then revealed that Aquino eventually did run into Soledad at the airport.

For more on this story, log on to ABS-CBN News.com.

Noynoy Aquino Shalanisoledad Karenvillanueva
Your Guide to Thriving in This Strange New World
Staying
In? What to watch, what to eat, and where to shop from home
OR
Heading
Out? What you need to know to stay safe when heading out