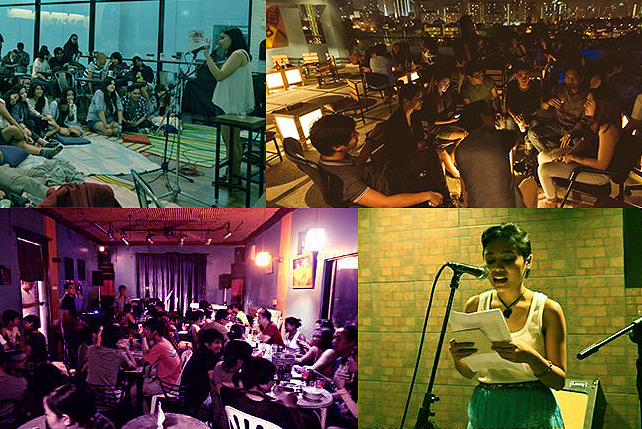 10 Go-To Places in Manila for Your Spoken Word Needs

These places are, ahem, slammin'. 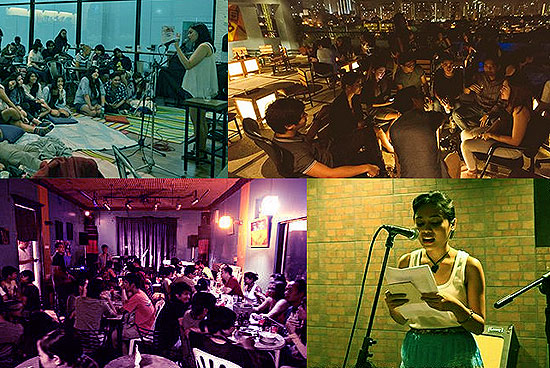 (SPOT.ph) The spoken word scene has come a long way since Kooky Tuason. A decade ago, performance spaces for poets were few and far between, but the sudden popularity boom (no small thanks to American spoken word poets like Sarah Kay) created major demand for more avenues for artists to speak the word—something these 10 places were only too happy to supply. 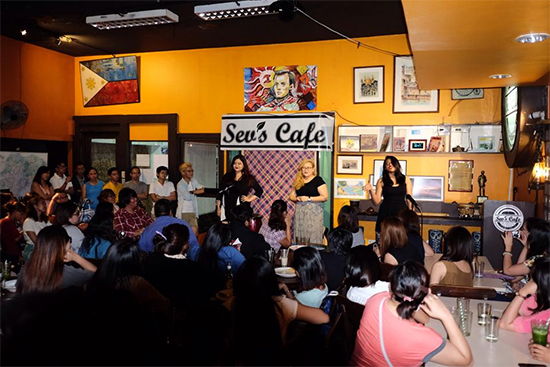 The home of the country’s most prominent spoken word group, Sev’s has hosted everything from open mics to slam competitions, and was also Fête de la Musique's spoken word stage. Their popularity brings in big audiences, and shows are always diverse: a few veterans from Words Anonymous (WA) peppered with several neophytes thrown in for good luck.

When to go: Words Anonymous’ open mic is held every third Saturday of the month. 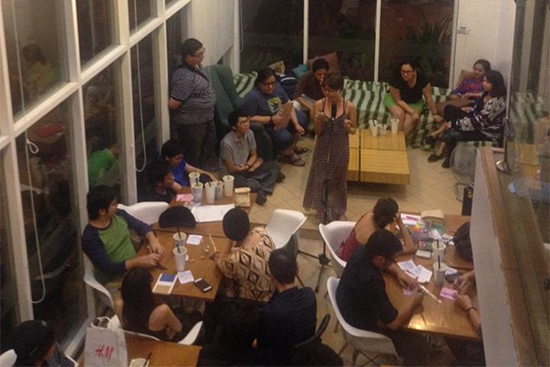 Many organizations and poetry groups hold their open mic nights at Moonleaf (all of which they generously plug on their Facebook page), but the people behind the tea shop are known to host their own as well. Only the Maginhawa and Makati branches so far have organized spoken word events, but the killer poetry-milk tea combination has us asking for more.

When to go: The most recently concluded poetry event was Tulong Tula, a benefit gig for Paaralang Pantao held on June 5. Follow their official Facebook page to get updates! 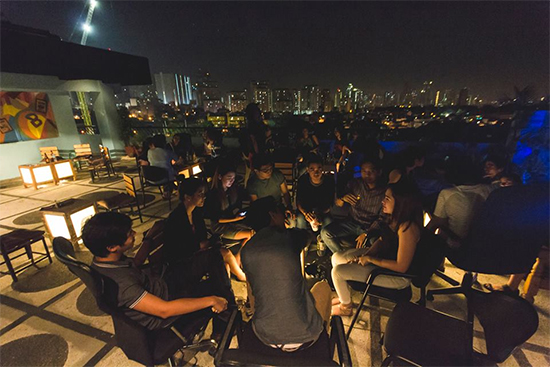 If you want to catch a Words Anonymous gig—let’s be honest, you do—but Sev’s is too far, there are no more excuses. Bunk is a late night restaurant bar with an amazing view right smack in the middle of the metro. They’ve mostly held exhibits and gigs since they opened last April, but once a month, WA brings spoken word to their rooftop gallery bar.

When to go: Bunk and Words Anonymous partner up on the second Saturday of every month. 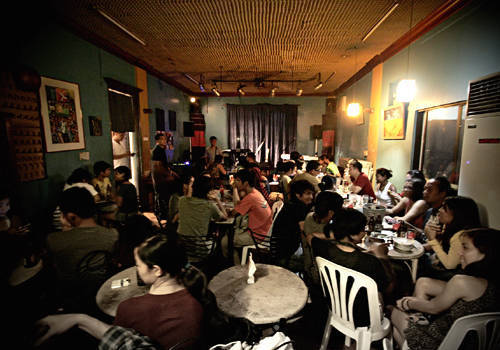 Conspiracy is famous for gig nights featuring the likes of Cynthia Alexander and Noel Cabangon, but they are also home to Comedy Mayhem. Mike Unson’s monthly comedy show recently opened up its lineup to musicians, magicians, and, yes, spoken word artists. 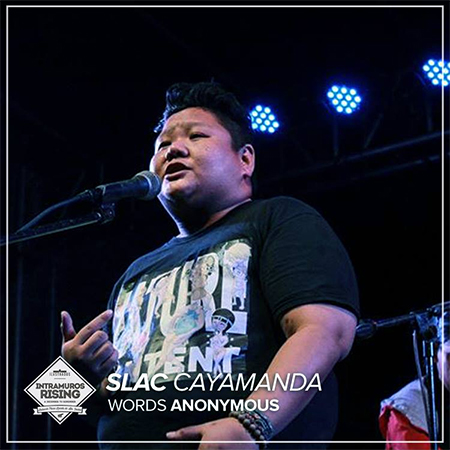 This historical landmark seems like an awfully odd choice for poetry performances, but it’s perfect for big performance tours like Intramuros Rising. Ilvstrados, a group “dedicated in revitalizing the beautiful city of Intramuros,” produced two shows last year and have announced its fourth concert next month. It will feature local indie bands and performances by poets from Words Anonymous and White Wall Poetry.

When to go: The next Intramuros Rising is on July 25. Follow the official Facebook page for more details. 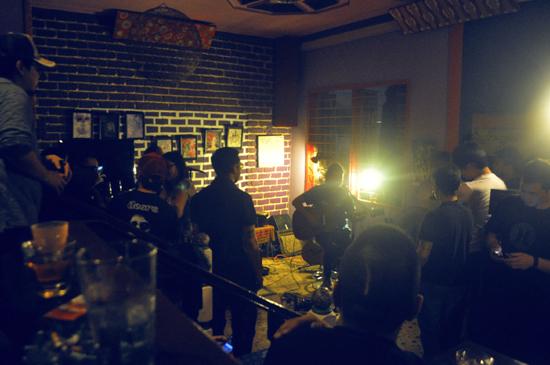 Boho (for short) is a house-turned-artists'-space tucked away in a small street off Aurora Boulevard. The space is small and hardly outfitted for performances, but this little hole-in-the-wall makes up for it in charm. Spoken word sets feel more like a jam night between friends, and this makes it easier for first-timers to feel right at home with the pros.

When to go: Poetry shows pop up every so often, so follow Boho Sarapsody's Facebook page to get updates.

The newly-constructed mall hides an open event space in the middle of its building complex. Events are frequent at UP Town Center, and makeshift stages are set up as often as a few times a month. Student organizations in nearby universities (as well as established music and art collectives) hold their events here, and many of them feature up-and-coming spoken word artists. If the event is too packed, there are always the surrounding restaurants from which you can enjoy the poetry.

When to go: Tula, Kanta, Kape is happening again on July 26. Follow UP Town Center's official Facebook page for updates!

UP Town Center is at Katipunan Avenue, Quezon City. 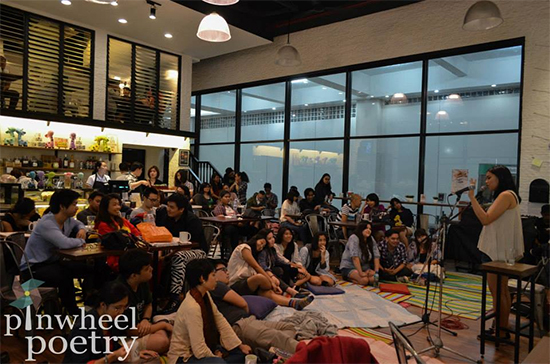 Poetry is a no-frills performance that normally doesn’t require more than a microphone, so open mics can pop up in the strangest of spaces. Staple and Perk Bakery is known not only for their food and pastries, but also for the wide range of events they host, like poetry open mic nights and calligraphy workshops. The Loudmouth Collective (formerly Pinwheel Poetry), a south-based poetry collective, holds their open mic Hideaway here monthly.

When to go: There are open mic nights every second Saturday of the month. 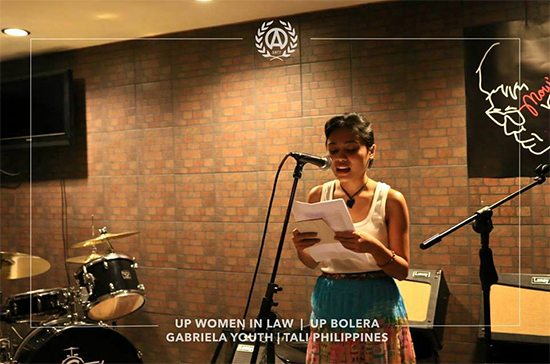 The intimate set-up at Mow’s makes them a choice option for many local indie music productions and poetry nights. The small space guarantees that all eyes and ears will be focused on the stage, avoiding the annoying chatter that goes on in bigger shows. Plus, you can sit back with cheap beer and the entire selection at neighboring restaurant, Kowloon House.

When to go: Don't miss out on gigs and poetry nights—like Mow's on Facebook! 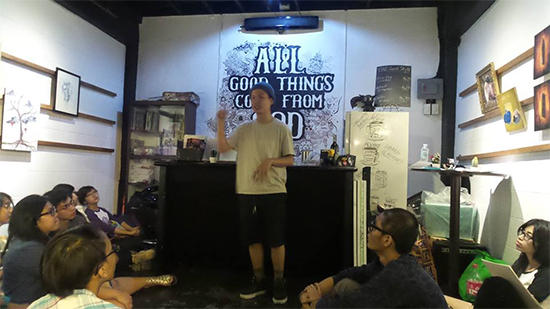 Owned by the mysterious Man in Black, The Warrior Poet is a hub in the heart of Hipsterland for poets, musicians, magicians, and all other kinds of artists. They hold open mics, poetry jams, and writing workshops on an almost monthly basis. The mother of local spoken word, Kooky Tuason herself, performed at the café’s first spoken word night last July.

When to go: Feel free to swing by any night, but for gig schedules, stay updated and like The Warrior Poet on Facebook.

Photos from the establishments' official Facebook pages and SPOT.ph archives

Update (June 11, 1:35 p.m.): An earlier version of this article listed The Warrior Café as the venue for Kooky Tuazon's For Word and By Word. The recording was actually done in Clayroom in Makati. The spoken word shows at Sev's and Bunk were also updated.

Boho Sarapsody Bistro Bunk Conspiracy Garden Cafe Intramuros Moonleaf Mow's Sev's Cafe Staple And Perk Bakery The Warrior Up Town Center
Your Guide to Thriving in This Strange New World
Staying
In? What to watch, what to eat, and where to shop from home
OR
Heading
Out? What you need to know to stay safe when heading out