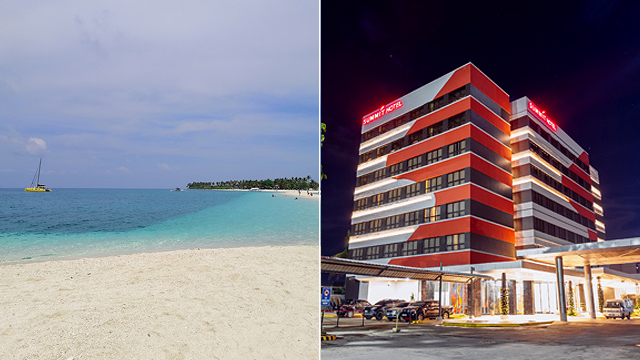 Make This Hotel Your Jump-Off Point to Leyte's Gorgeous Beaches

It's less than 15 minutes away from the airport.

(SPOT.ph) When Typhoon Yolanda (international name: Haiyan) wrought havoc in Visayas in 2013, almost the whole country was at a standstill. There were more than 6,000 fatalities, low-lying towns were covered with floodwater, and infrastructure in the provinces of Leyte, Samar, Bohol, and Cebu were destroyed. Tacloban City, the regional center of Eastern Visayas, was one of those heavily hit by the storm. But now that it’s been years since the tragedy happened, Summit Hotel Tacloban—which opened in June 2018—is more than ready to serve as the city's jump-off point to Leyte’s white-sand beaches, unspoiled dive sites, and historic destinations. It is also hoping to be the top-of-mind when it comes to accommodation options for the annual Pintados-Kasadyaan Festival, which is Tacloban's biggest cultural event held on the last weekend of June.

"As one of the largest hotel groups, we identify areas that we might come in a bit early. But we are going to position ourselves so when the time comes that the place gets busier, we're [already] in good shape," Arthur G. Gindap, Robinsons Land’s senior vice president and business unit general manager, explained about coming to Tacloban. It is still a price-sensitive market, according to him, but it’s only a matter of time before Leyte goes through a tourism boom.

Rates are at an average of P4,000 per night, even less for corporate bookings. “[And] it's one of the highest in the city," Gindap added. But the services they offer satisfy tourists' high expectations. "The days of 10 years ago when the best local hotel somewhere is still crap, is still dirty—those days are gone. Our standards are really raised as we become [a] more prosperous nation."

Summit Hotel Tacloban has a total of 138 rooms and features neutral hues, natural wood, and native stone in its finishes to give off a tropical vibe. The wooden arches at the reception area are reminiscent of welcome arches that every barangay, every city, and every province in the Philippines have—a symbol of Tacloban City’s reputation as the gateway to the rest of Eastern Visayas. It is, after all, just 12 minutes away from the Daniel Z. Romualdez Airport and 20 minutes away from Tacloban Port.

Also echoing this local ambiance are the guest suites that are patterned after the various festivals in the region. The first is Pintados, which describes the native Visayan tribes who tattoo their whole body as a symbol of nobility and bravery. The second is Lubi-Lubi, which is inspired by the indigenous street parade that celebrates the city's abundant coco plants and materials. The third is Sangyaw, which is named after the religious and socio-cultural festival that culminates with a colorful parade of lights.

After experiencing Taclobanon’s hospitality for a night (or so), you are ready to go on your next adventure. Whether it’s the white-sand beaches on Canigao Island in Matalom, Kalanggaman Island in Palompon, and Cuatro Islas in Inopacan or the unspoiled dive sites in Sogod Bay, the possibilities are just endless.

Summit Hotel Tacloban Leyte Travel Philippines
Your Guide to Thriving in This Strange New World
Staying
In? What to watch, what to eat, and where to shop from home
OR
Heading
Out? What you need to know to stay safe when heading out