Boracay Island Is One of World's Best, Says Condé Nast Traveler
Loading
Already a member? Log in
No account yet? Create Account
Spot.ph is your one-stop urban lifestyle guide to the best of Manila. 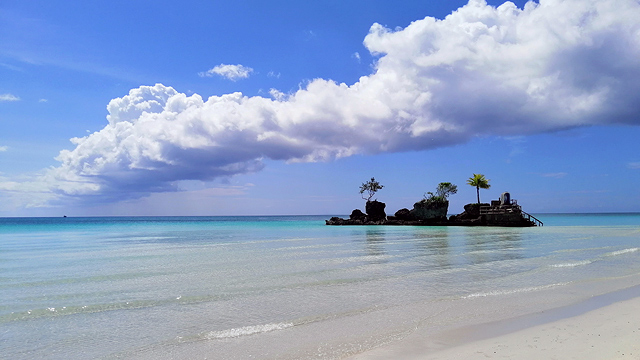 Boracay Bounces Back as Best Island in Asia

(SPOT.ph) When Boracay Island in Aklan was forced to close down for six whole months in 2018, many were saddened. The government-mandated closure didn't only mean having one less tropical destination to party in, but also gravely impact the local Aklanons who greatly depend on tourism as source of income. The island reopened on October 26, 2018, but by that time, New York-based travel magazine Travel + Leisure already came out with their "The Best 15 Islands in the World" list and Boracay was nowhere to be found. Now, Boracay is making waves once again as it finds itself on the list of "Top 5 Islands in Asia" in Condé Nast Traveler's 2019 Readers' Choice Awards.

"This itty-bitty island (just under four square miles) in the Western Philippines is as close to a tropical idyll as you’ll find in Southeast Asia, with gentle coastlines and made-for-Instagram sunsets," starts the description by writer Valerie Marino. She also cited White Beach as the island's main draw. Cebu and Palawan, which are on second and fourth place respectively, also made it to the 2019 list.

In 2017, Boracay bested 29 other islands in the world; but the list was broken down by region in 2018—when Boracay trailed behind newcomer Siargao, but still beat Palawan. 2019's rundown is also broken down into six parts: Asia, Australia and the South Pacific, Caribbean and the Atlantic, Europe, North America, and the United States.

The 2019 Readers' Choice Awards also reveals the Philippines as one of the world's 20 favorite countries, ranking at number eight with a score of 90.63. It trails behind Indonesia, Thailand, Portugal, Sri Lanka, South Africa, Peru, and Greece.

Readers also voted for Shangri-La's Mactan Resort and Spa in Cebu and El Nido Resorts - Pangulasian Island in Palawan for top resorts in Asia. The two resorts are at 11th and 16th place, respectively.

Condé Nast Traveler is now on its 32nd edition of the annual worldwide survey where 600,000 registered voters weighed in about the world's best islands, must-see cities, and top countries. Nearly 10,000 hotels, resorts, and spas were also ranked and rated by their readers. The results are published online every October and on print every November.

Conde Nast Traveler Boracay Travel Philippines Cebu Palawan Adventurer Seasoned Savvy
Your Guide to Thriving in This Strange New World
Staying
In? What to watch, what to eat, and where to shop from home
OR
Heading
Out? What you need to know to stay safe when heading out