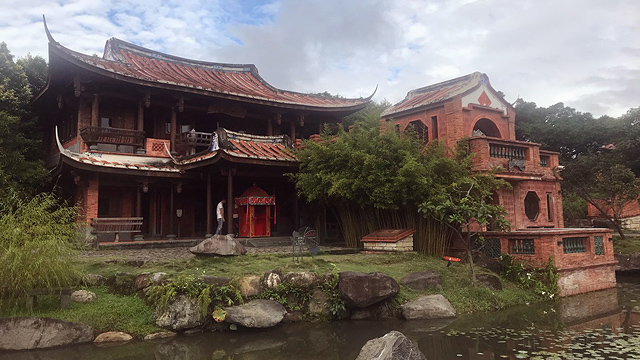 (SPOT.ph) After months of waiting and a lot of delays, the Taipei Economic and Cultural Office finally declared visa-free entry to Taiwan for Philippine passport holders—at least until July 31, 2018. It was great news for travelers who want to experience the island nation, which is an interesting mix of bustling city center, entertainment hub, and scenic sites by the coastline. Not to mention the variety of street food options that you can feast on at a very affordable price.

Check out some of the locations that caught our eye (and camera lens). Happy snapping! 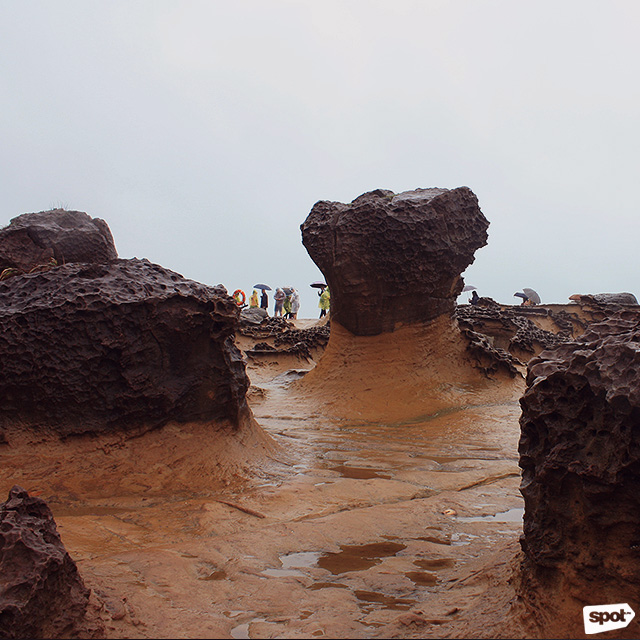 Yehliu is a cape in New Taipei City that stretches for about 1,700 meters. It's a geological wonder that features rock formations shaped by the wind and through time. Some of the famous formations are the Queen's Head, Dragon's Head Rock, Fairy's Shoe, Candle Rock, Ice Cream Rock, and a lot of mushroom rocks. It can be rainy on the northern coast of Taiwan so make sure that you have your umbrella. Raincoats in various colors are also sold in the area so you can easily take hundreds of photos despite the drizzle.

How to get there: From Taipei Main Station, get on the KuoKuang bus (Bus 1815, NT$96) that goes directly to Yehliu Geopark. 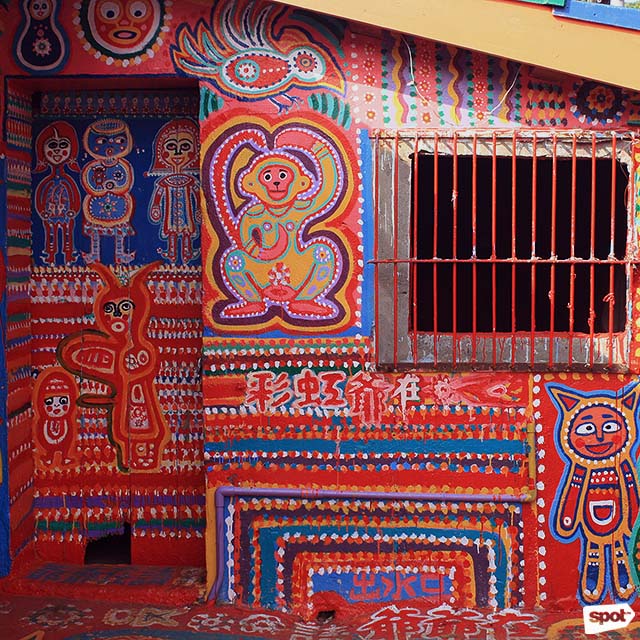 Formally known as Caihongjua Village, Rainbow Village was one of Taiwan's housing projects, distributed among veterans of the 1950 Chinese Civil War. These small and low-cost neighborhoods were later torn down one by one, including Caijongjua. To bring the village back to life, Huang Yung-fu—one of the last residents—started painting animals, dolls, and airplanes with bright colors on the walls and pavement. After students of a nearby university discovered the paintings, Rainbow Village became a tourist attraction, prompting the local government to suspend demolition.

How to get there: You can take the Taiwan High-Speed Rail from Taipei to Taichung (NT$700), then take the bus to Rainbow Village (NT$20). 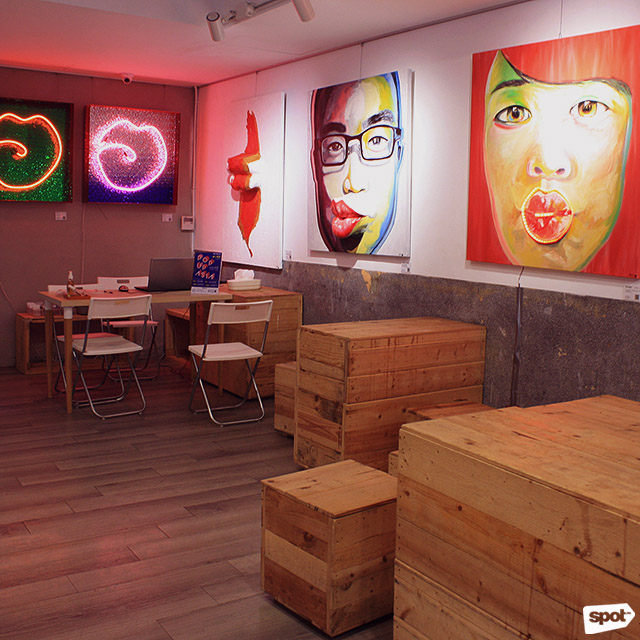 Flip Flop Hostel Garden matches the strong artistic vibe in Datong District. It is, after all, right in front of the Taipei Museum of Contemporary Art. You can take photos of the kiss-themed paintings and installation art by the entrance, which are part of a permanent exhibit by Attilio Arts called Give Me A Kiss. The common areas, such as the lounge, reading corner, and dining room, are filled with artworks, as well. You're sure to have a bright morning with all the colorful murals around. Even non-guests can drop by to check out the exhibit, join art or dance workshops at the Lounge Lab, or catch a music gig.

How to get there: Flip Flop Hostel Garden is within walking distance of both the Taipei Main Station and Zhongshan MRT Station (Songshan-Xindian Line and Tamsui-Xinyi Line). 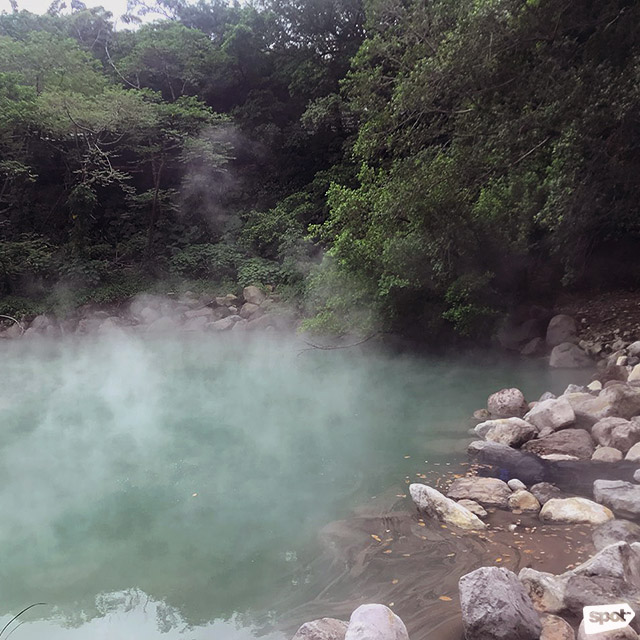 Beitou is a mountainous district known for its hot springs. It might remind you of Los Baños, Laguna. The most Instagrammable part of this area is Thermal Valley where the water is almost translucent green—thus the moniker Jade Springs Valley. Its other name is Hell Valley because of the steamy mist that climbs up to 100 meters from the ground. It's not for bathing though! That green color comes from the steaming sulfur, which is highly acidic; plus the water temperature can go up to 100°C. 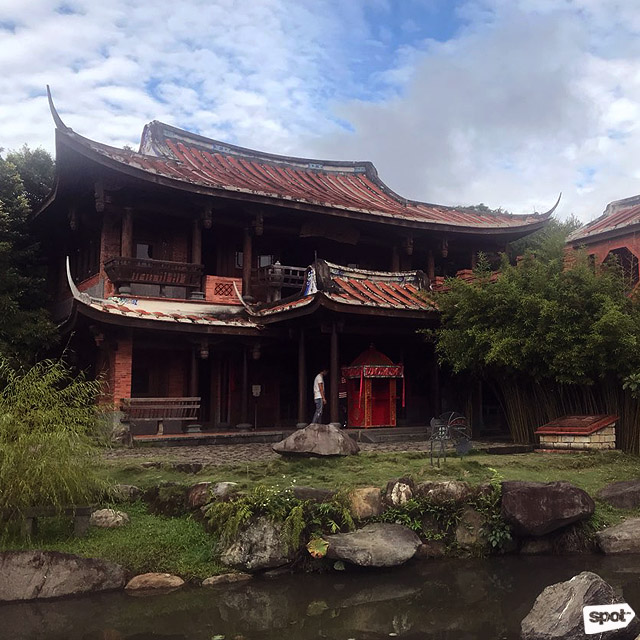 The 200-year-old Lin An Tai Historical House is one of the well-preserved traditional Chinese houses in Taiwan. It makes for good architecture photos, especially since it follows the Southern Fujian style of having a well-planned courtyard—including a pond that was used for defense, decorated partition walls, a stone garden, and other intricate landscaping. It also doubles as a museum that showcases Chinese artifacts.

How to get there: Lin An Tai is within walking distance from the Yuanshan MRT Station (Tamsui-Xinyi Line). 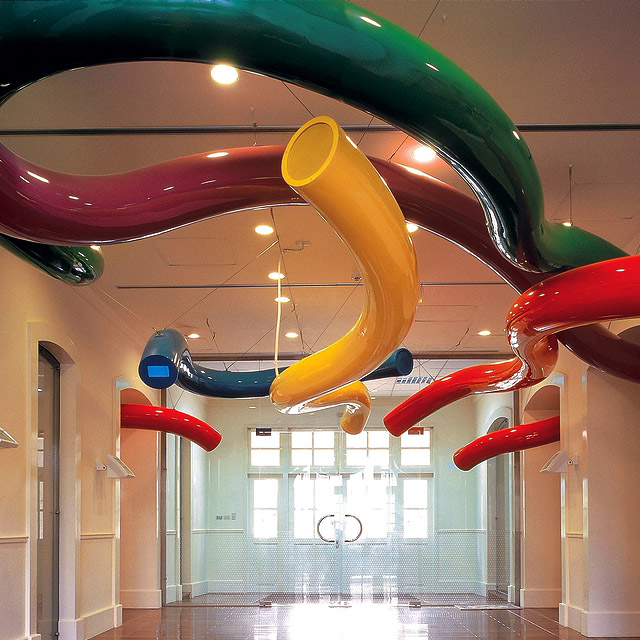 With its old-school red-brick façade, you wouldn't expect that this museum houses Taiwan's contemporary art pieces. It was built in 1920 as home to the Jian Cheng Elementary School, reappointed as the City Hall in 1946, then finally as an art museum in 1995. Exhibits often change, and since this is modern art, that there's always something cool to see.

How to get there: Museum of Contemporary Art is within walking distance of both the Taipei Main Station and Zhongshan MRT Station (Songshan-Xindian Line and Tamsui-Xinyi Line). 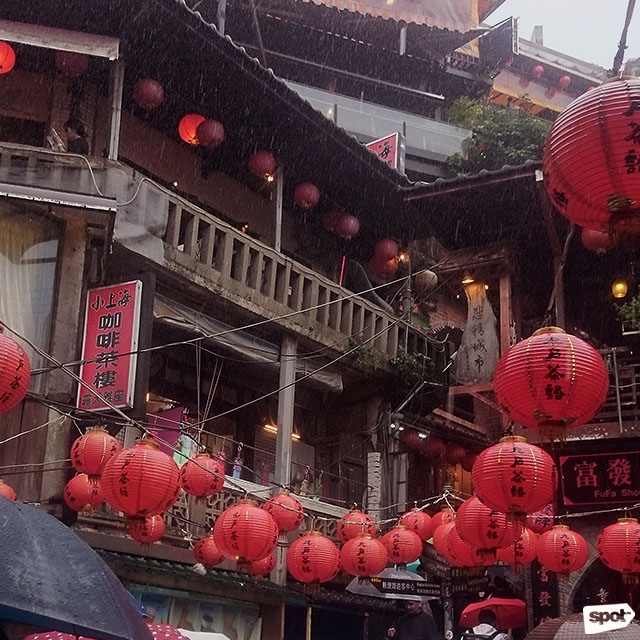 If you're a big fan of Hayao Miyazaki's 2001 animated film Spirited Away, then you might want to visit the old gold-mining town of Jiufen. The streets that are lined with tea houses and dumpling stands, designed with hanging red lanterns, and connected to a network of alleys, have a striking resemblance to the Studio Ghibli movie. It was also the setting of the 1989 Taiwanese historical drama film A City of Sadness, and later, the 2017 Filipino romantic comedy All of You. Don't forget to get yourself a bunch of No-Face, , and even Totoro memorabilia from the souvenir shops.

How to get there: From Taipei Main Station, take the train to Ruifang Station, then a bus (NT$15) from Mingdeng Road to Jiufen. Another option is to take the MRT from Zhongxiao Fuxing, then a Keelung Bus (NT$102) to Jiufen. 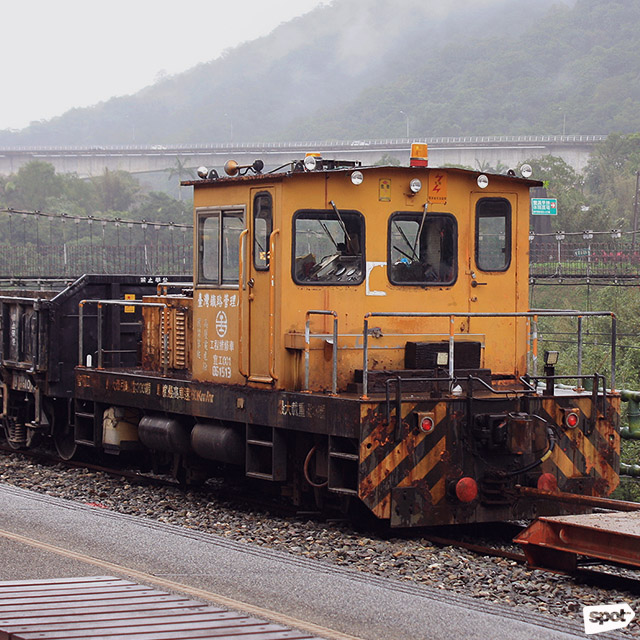 If Jiufen used to be a gold-mining town, Shifen used to transport coal during the Japanese era to different villages and districts through the Shifen Railway Station. The old train is still operational today, and it passes by the scenic Shifen Waterfall. Shifen Old Street is also lined with a number of stalls selling street food, including the highly recommended grilled chicken wings stuffed with rice. It's also the only place in all of Taiwan where it's legal to let a Chinese lantern bearing your wish fly to the sky.

How to get there: From Taipei Main Station, take the train to Ruifan Station then transfer to the Pingxi Line (NT$52). 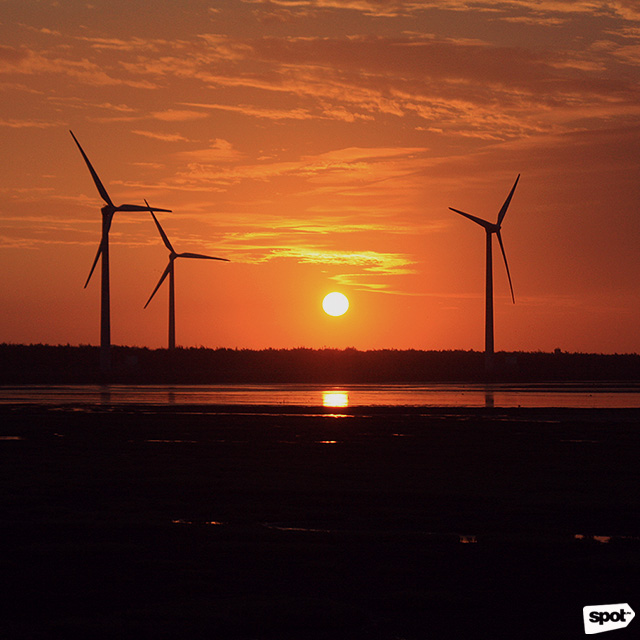 With its towering windmills, you could compare Gaomei of Taichung to Bangui of Ilocos Norte. It's where fresh and salt water meet; and by dusk, the sun seems to touch the muddy tidal flat. Gaomei Wetlands is also one of the best places in Taiwan for bird-watching as it serves as temporary home for migrating birds.

How to get there: Gaomei is a bit far from the center of Taichung, so you may have to opt for a taxi ride from the High-Speed Railway Station. 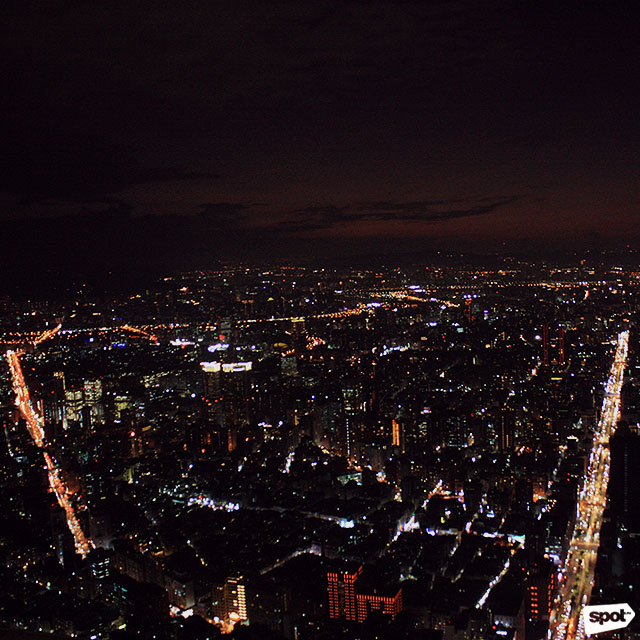 Taipei 101, a usual tourist stop, was known as the tallest building in the world until 2010 when it was surpassed by Dubai's Burj Al Arab. Its observatory, which offers sweeping views of the city, is located on the 89th floor—which you can reach in less than 40 seconds through the high-speed elevator from the fifth level of the Taipei 101 Mall. You can also climb to the view deck on the 91st floor for an outdoor view. It's best to go at night and see the city lights come to life.

How to get there: From Taipei Main Station, take the Tamsui-Xinyi Line of the MRT and get off at Taipei  101 Station (NT $25).

How to Get to and Around Taiwan:

Local airlines like AirAsia, Cebu Pacific, and Philippine Airlines have direct flights to Taoyuan International Airport. From the airport, you can go to Taipei Main Station in Taipei City by bus (Bus 1819) or by the Airport MRT. Most buses, MRT lines, High-Speed Railway, and train routes start from the Taipei Main Station.