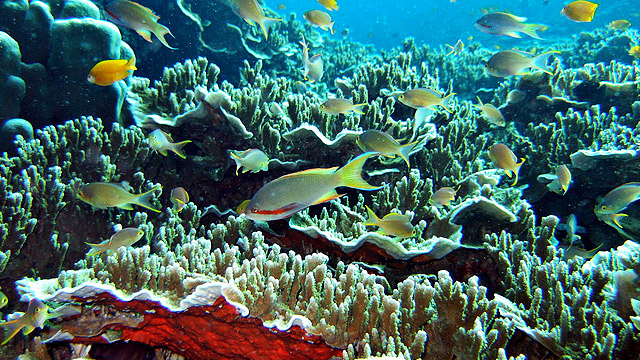 10 Places for Snorkeling in the Philippines

You don't have to go too deep!

(SPOT.ph) With the Philippines lying on what's called the "Coral Triangle," which is basically the "center of the center of marine biodiversity in the world," it doesn't come as a surprise that we have a number of places that are perfect for exploring the deep. But if you're not into freediving or scuba diving, you still have the chance to see our abundant marine life by swimming in shallow waters.

Here are 10 places in the country where you can go snorkeling:

Twin Rocks is a favorite among Manileño divers not only because of its short distance from the Metro, but also because of the shallow depth and great visibility even when you're just snorkeling. You can easily see different colors of hard and soft corals covering two massive rocks that are about a meter apart—thus the name; and schools of clownfish (yes, Nemo!), jacks, and more fish from the surface. If you're lucky, you might even see a sea turtle passing by.

Panagsama Beach's house reef, being just a few meters from the shore, is highly recommended for travelers who want to do some snorkeling. You can see a variety of corals and different kinds of fish on the 10-kilometer steep wall within the peninsula. You also don't have to strap on a tank to witness Moalboal's famous sardine run—an amazing phenomenon where millions of sardines swim and feed together, often for migration purposes.

Across the Philippines, marine sanctuaries try their best to protect the dwindling number of giant clams—which don’t "just happen to be our food," by the way. One of these is Kibila Giant Clam Sanctuary, which houses thousands of these bivalve mollusks, including the endangered Tridacna gigas that can grow up to four feet in length and weigh more than 400 pounds. Aside from conducting lectures on the significant role of their species in our ecosystem, the sanctuary also lets travelers swim above rows of giant clams.

Another marine sanctuary, this island is situated in the picture-perfect Olonga Reef—which also houses the Gilutongan Marine Sanctuary. The best time to go snorkeling is at 10 a.m. when the tide is low and small fish abound near the surface of the water.

Puerto Galera, which was declared a biosphere reserve by the United Nations Educational, Scientific, and Cultural Organization in 1977, has one of the country's best coral reefs. Coral Garden, which is between the islands of San Antonio and Boquete, is highly recommended for snorkeling because of its shallow depth—at only eight feet! Its proximity to Metro Manila makes it a good choice, too.

Coron is not only known for its limestone cliffs, turquoise-blue lagoons, and white-sand beaches. This group of islands and islets in Palawan is also popular for its snorkeling spots, including the waters of Siete Pecados Marine Park. Corals can be found less than 10 feet from the surface, so be careful not to step on them. Sea turtles are also often seen wandering around the expansive reef.

Snorkeling around Miniloc Island is exclusive to guests of El Nido Resorts, but it's definitely worth a look if you love snorkeling. The house reef is teeming with huge 1.5-meter jack fish, which the staff nurses and feeds on a regular basis; colorful hard and soft corals; damsel fish; and other species of tropical fish.

Balicasag Island has a 400-meter marine sanctuary where healthy corals and schools of fish abound. With crystal-clear water, you can easily spot huge sea turtles swimming near the ocean floor. Whale sharks can also be seen around the island from December to March.

Tubod Marie Sanctuary is a 7.5-hectare protected area off the southwestern coast off Siquijor. Just swim about 20 meters away from the white-sand shore and you'll be treated to a view of barracudas, angel fish, clown fish, and a small but rich coral reef. There's no current so you can have a relaxing snorkeling session.

Located off the coast of Jasaan in Misamis Oriental, Agutayan Island boasts a crescent-shaped sandbar surrounded by crystal-clear water and rich marine life. It houses a three-hectare marine sanctuary where giant clams breed through the partnership of the local government and the University of the Philipines - Marine Science Institute. Its shallow water also makes it an ideal spot for snorkeling and marveling at the various colors of starfish that rest on the vast expanse of seagrass.