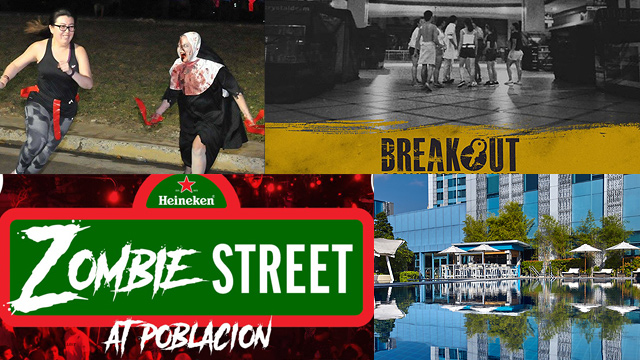 Ready your most creative costumes!

(SPOT.ph) Most of us go to the province during Undas—either to enjoy the long weekend with a beach trip or to visit the resting places of our loved ones. But if for whatever reason you see yourself stuck in the city, don’t fret. There are a number of things to do in Manila for a fun-filled Halloween, from a costume party for pets to a fun run with zombies.

We round up Halloween activities to keep you busy in the coming week:

Outrun a swarm of zombies

Remember those movies where the characters try to run for their lives despite the fact that they probably won't survive the swarm of zombies coming after them? Well, get ready to experience it for yourself as Outbreak Manila—the city's biggest zombie run—returns this Halloween season. Don't worry though, the zombies won't be eating your flesh when they come near you; but they can grab your belt flags and kick you out of the game.

Avoid getting trapped inside a huge mall

No matter how much we enjoy them, shopping malls can be eerie after closing hours. Imagine those mannequins just standing there and staring into space, dark halls leading to a basement or a sketchy stock room that will give you the creeps. Breakout Philippines, which is known for their series of escape rooms, challenges brave souls to get out of Festival Mall alive through tasks, clues, and puzzles.

Bring your nieces and nephews to a potions class

Be the best tito or tita ever and take the little rascals to Ortigas Malls' Wicked Weekend. You can let them dress up in their favorite costumes for an afternoon of trick-or-treat and bring them to a session of potion-making. You can choose from three venues: Estancia and Tiendesitas in Pasig City; and Shoppesville in Greenhills, San Juan.

Go on a relaxing staycation

It's not often that we get long days away from work, so why not make the best of it through a relaxing staycation? Guests at Crimson Hotel in Filinvest City may book a Deluxe Room for P7,499, which includes an overnight stay for two, passes to the Pirates and Mermaid Halloween Party on October 31 at the Crimson Grand Ballroom, and a buffet breakfast for two. Promo runs from October 30 to November 1.

What's the best thing about celebrations? The food, of course. New World Manila Bay Hotel is holding a spooktacular feast that features a spread of international cuisines, signature dishes, and sweet treats all served at Market Café in the evening of October 30 and October 31. Buffet rate is at P2,600 per person.

Hunt for ghosts in one of Manila's scariest places

After serving as a place of torture during the Battle of Manila, it doesn't come as a surprise that Intramuros is known as one of the most haunted places in the Metro. But this hair-raising setting makes it the perfect place for Intramuros Investigation, an after-dark biking hunt where you have to solve two mystery cases: the case of the vaguely feminine apparition often seen by night guards in Fort Santiago and the mystery of the troubled spirit of a departed priest that has been walking the streets of the Walled City.

Intramuros Investigation is on October 26, 30, and 31, from 6 p.m. to 10 p.m. Meeting place is at Plaza San Luis Complex, Sta. Lucia corner Muralla Street, Intramuros, Manila. Tickets, priced at P799 for each case, is available through Mystery Manila's website.

Catch a free screening of a horror classic

George A. Romero's Night of the Living Dead is not a cult classic for nothing. This 1968 horror film, in its black-and-white glory, follows seven people trapped in a farmhouse that's about to be attacked by "living dead" monsters. Yes, it's a zombie movie even before zombie movies became a thing. You can catch it for free at Altro After Dark.

Take the party to the streets

Poblacion in Makati is known for its biggest street parties on special occasions, and Halloween is no different. Ready your most creative costume, shine your dancing shoes, and head on over to Z Hostel and nearby streets for a night of drinking and partying.

Zombie Street at Poblacion is on October 31, from 6 p.m. to 3 a.m. along Don Pedro Street, Poblacion, Makati City.

Dress your pets in the cutest costumes

When it comes to pet-friendly places in the Metro, Eastwood City is always top of mind. So of course, it's only right that they're hosting a Halloween party with our four-legged friends. Petrified 2019: A Zombie Halloween Bash features a pet costume contest, a trick-or-treat parade, and a bazaar of pet merch.

Petrified 2019: A Zombie Halloween Bash is on October 27, from 1 p.m. to 6 p.m. at Eastwood Mall Open Park, Eastwood City, Libis, Quezon City. Just present a single or accumulated receipt of P600 from any Eastwood store.

Two of our favorite things—books and candies—will be given away for free at Fully Booked Bonifacio High Street's Halloween ComicFest. You can also score other graphic novels at a 20% discount for one day only.