Burn this disco down 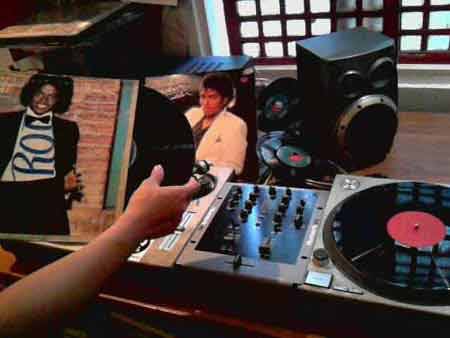 Which is what always happens when you’ve got friends over, with malt beer, and these.

Whatever happens, regardless of guests’ musical prejudices, a night of inebriation always veered dangerously in the direction of Michael Jackson. You may start out playing whole Charlie Parker and Miles Davis LPs, progressing to Deodato, then Sabbath and Hendrix, and, after half a bottle of rhum, Isley Brothers, James Brown, Giorgo Moroder, then disco and house, but just when everyone’s sufficiently hammered, you whip out the big guns. You don’t care whether they’re jazz freaks, house-techno heads, indie rockers, skate punks, or Air Supply fans. They all scream upon recognizing the first few pulsating bass notes of "Don’t Stop Till You Get Enough." When the drums kick in at that exact moment Michael screams "Oooh!" to quote Shakespeare, drunk mutherfuckers be slayed, and a brief but totally shameless and awkward bout of dancing ensues. Like embarrassing sex with the ugliest girl in school, it would remain undiscussed the following day.

Because of the ubiquity of its songs, I didn’t care so much for Thriller, although I do acknowledge its genius, which would be like refusing to acknowledge fascinating cloud formations or a breathtaking mountainside because they’re just there. Its campiness gives mutant births to delightful strangeness such as this:

I also did not care much about Jackson’s more recent works from Bad onward. I also did not dress up in tight black pants, red jacket, nor did I attempt to do the moonwalk. I’m the kind of guy who’d rather shoot himself in the head than sit through Dirty Dancing again, but I still get goose pimples watching this, how something so simple and pure can be so utterly devastating:

I was only four years old when Off the Wall was released. It came out in 1979, and there was something in the air that became conducive to musical greatness: Joy Division’s Unknown Pleasures, Elvis Costello’s Armed Forces, Gang of Four’s Entertainment, The Police’s Regatta de Blanc, The Specials’ debut, Public Image’s Metal Box, and London Calling by The Clash.

Truth is, had he died after making Off the Wall and Thriller, his greatness would still be secured. Off the Wall already occupies that same exalted space as Picasso’s Guernica, Borges’ Ficciones, the Taj Mahal, Michael Jordan’s final jumpshot against Utah, Beethoveen’s Ninth Symphony, and Martin Luther King’s 1963 speech at the Lincoln Memorial. That the album only received one lousy Grammy nomination is as criminal as the Oscars ignoring Hitchock and Scorsese. Then again, they give Grammys to the likes of Garth Brooks and Celine Dion. Definitely Off the Wall does not deserve the indignity of the Grammys.

This was the time when he was a beautiful black man. "Beautiful" not in the La Toya Jackson sense of the word, but... words fail me. Just watch. More than the gold astronaut suits, the grotesquely kabuki-faced freak, this is the Michael Jackson I want to forever remember:

Off the Wall was one of the last few incandescent moments when all the world agreed on one thing. Thriller saw the planet singing the same nine songs. For a brief moment in his sad, strange existence, Michael Jackson made you believe in the existence of God. We end with critic Gary Mulholland’s qoute from his book Fear of Music: "Because once upon a time- and I realise this will sound somewhat bizarre- once upon a time, Michael Jackson was the symbol of all that was great and good about humanity."

Lord De Veyra ’80s Michaeljackson Lourd De Veyra
Your Guide to Thriving in This Strange New World
Staying
In? What to watch, what to eat, and where to shop from home
OR
Heading
Out? What you need to know to stay safe when heading out