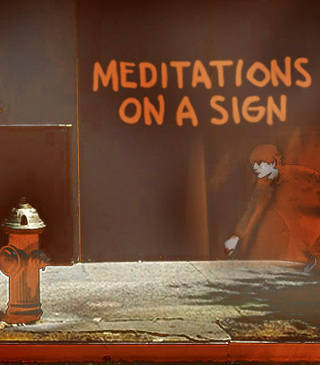 In a dirty turn of events, SPOT.ph Blogger Lourd de Veyra waxes analytical on all that...crap. 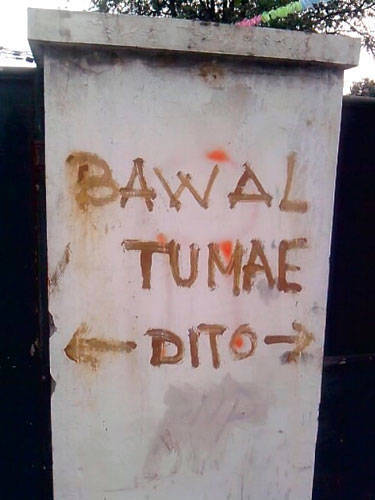 The fact that it even exists is troubling.

It presupposes that in the said area someone has previously committed a horrible crime against the civilized world. Equally disturbing is the possible degree of frequency involved. It means that colonic discharges might be a common occurrence. Once -- forgivable. But two or more? "I’ve had it with these mutherfuckers!" we can only imagine the angry proprietor storming out of the house with a can of spray paint in hand.

The keyword is "horrible," for why would there be a need for someone to actually take time out to spray-paint these words? Take note that a can of spray paint is worth more than the minimum wage. And how horrible is horrible? What excremental shape and size could elicit such wrath? Is a golden brown nugget any less offensive than a Taj Mahal of steaming auburn emulsion?

The word "tumae" implies a certain degree of rage and frustration.

The word is never used in polite conversation. In its place would be euphemisms like "dumumi," in the same way that well-mannered English speakers would not say "shit," "poo," or "crap" but will use "defecate" or, the even sillier sounding "move bowels." Primetime news broadcasts-which are mostly in Filipino-will not hesitate to say "pagtataé" when reporting about a cholera outbreak or a food poisoning case. "Pagtataé" has rather clinical reverberations, although you can hear the reporter’s voice hesitating on the consonants, as if apologetic for having to use the word.

But the act of crapping or, sorry, defecating on one’s property is the ultimate act of outrage, a breach of civilized behavior. However, BAWAL DUMUMI DITO does not pack the same indignant power of BAWAL TUMAE DITO.   In a sense BAWAL TUMAE DITO is a forceful retaliation against rudeness-it is fighting fire with fire. In some instances, the words "HOY GAGO" are affixed for emphasis.

But the term "dito" is also a cause of distress.

The two little arrows pointing in opposite directions also do little to help. Does this mean I can crap beyond the area specified by the arrows? As in: "Bawal tumae dito," but by inference, "Pero doon sa kabila puwede?"

Ponder on the alternatives: "NO SHITTING," which is shorter and more direct to the point, like "NO PARKING."

You seldom see it in Filipino; you rarely see "BAWAL MAG-PARK DITO." But the fact that the fact that BAWAL TUMAE DITO was written in blunt Filipino smacks of discrimination. It implies that the offender is of marginal education and economic status and therefore has deplorable toilet habits caused by primitive plumbing conditions.

Sure, maybe. Then again, it’s too Latinate, too scientific, too long, although it works well in adjectival form. As in, "The movies of National Artist Carlo J. Caparas are a fine example of Philippine excremental cinema."

How do they know it’s not a dog?

Of course, people will tell you that there is a major difference between human feces and dog poo. Disturbing, however, is the thought that one is able to exposure to effectively tell the disparity. How can such skill be developed? Through constant exposure?   But of course, dogs can’t read. Unless it’s the dog from The Family Guy. Or Scooby Doo.

To repeat: the fact that it even exists is troubling.

But one may also argue: maybe the world would be a better place if we only put more signs. You don’t see street signs prohibiting you from shooting that idiot driver who just cut you off. You don’t see a sign that says, "DO NOT FLIRT WITH THE HOT, DRUNKEN MARRIED CHICK" in a bar. Or "DO NOT PICK POCKETS" or "AVOID BRUSHING YOUR CROTCH ON OTHER PASSENGERS" in the MRT.

There is irony involved, though.

Maybe there’s something about the area that makes it ideal for colonic relief. Maybe it’s the sheer squalor, the filth, the thickets of garbage and scrap metal. If filthy begets filth, maybe it’s the impression of an utter lack of regard for hygiene on the part of the property owner-after all, you don’t see anyone crapping in front of Serendra. On the other hand, it can be argued that maybe the owner does care. Why else put up the sign? Bonus question: maybe it’s just me and my flagging eyesight, but why is the spray paint in the color... brown?

Lourd De Veyra Meditations On A Sign Blog Crap
Your Guide to Thriving in This Strange New World
Staying
In? What to watch, what to eat, and where to shop from home
OR
Heading
Out? What you need to know to stay safe when heading out