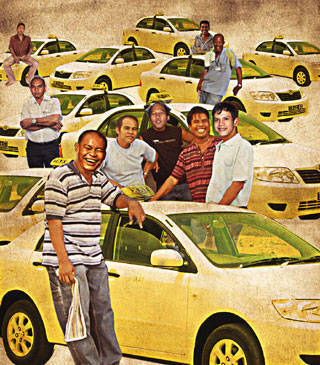 Our SPOT.ph blogger on "the symbol of the total breakdown of social institutions and all that is good and decent in man."

This is the ironclad rule of life: in that moment when you desperately, piss-in-your-pants need a cab, you'll never get one. When you don't, they're all meekly parading in front of you.

Between the hours of 10 a.m. to 8 p.m. they're the most horrible creatures on the face of the earth–foul, scheming, thieving, sniveling, snarling bastards whose asses you just want to backhoe. There are times when the taxi driver becomes the symbol of the total breakdown of social institutions and the spirit of decorum and all that is good and decent in man.

I know, I'll get bleeding-heart comments like, "No. You don't understand them. They're only like that because they need the money." To which I reply in advance with two unprintable words that start with the letters 'F' and 'Y.' I need money, too, you know. But I don't go around dicking people around.

The following are some of the major cabbie classifications:

Like beasts of prey, they'll pounce on you when you're desperate and helpless–i.e laden with 10 shopping bags and a big-ass pizza box. And it's raining. Sonofabitch will charge P400 for a ride that costs only P60. There is a wonderful place in hell reserved for these lovable creatures.

"Traffic, eh" can be the most infuriating excuse you'll ever hear. Tell me, which part of Metro Manila doesn't have traffic? It's about as common to this godforsaken city as bad air and Willie Revillame songs. Edsa is slow and heavy? Stop the freakin' presses!

Plus, there are times when it's implicit that they get to keep a 10-peso change as tip. But my friends, these are equally tough times for all of us. Bastards don't even have the courtesy to say thank you.

And be wary of the "batingting"– that small device hidden somewhere under the driver's seat which, when pressed, jacks up your meter.

He has opinions on everything, from Manny Pacquiao to politics to religion to quantum physics. Which is fine, because the cabbie is the contemporary embodiment of the kwentong barbero. This type is someone I can deal with, because oftentimes he can be a social barometer of sorts. But there are times when you just want to rest or catch a nap or read while plodding through a traffic jam of Biblical proportions. Most talking cabbies are sensitive enough to sense that you're in no mood for chitchat. But there are those who just won't shut up, even if you pretend to be snoring already. It's either they're desperate and De Niro-ish lonely ("You talkin' to me? Well, I'm the only one here"). Or just on meth.

"Pakituro na lang po kung saan yun," are some of the truly scariest words you'll ever hear when riding a cab. What if you know shit about directions to Pritil or Isla Putingbato? Uhm, aren't these drivers supposed to have basic training in urban geography? Oops, sorry, I forgot. This is the Philippines where clinically certified morons, drug addicts, and even blind people are issued driving licenses. Apparently, all you ever need to become a cabbie here is a license. I know it's too much to ask, but at least all franchise holders should provide for their drivers some training in city navigation as well as basic manners. I mean, how hard is it to buy a Metro Manila map and study it? Don't you think familiarity with possible alternate routes might at least lighten the traffic on the major thoroughfares?

He's the one who won't talk, or even acknowledge your directions. Which is good when you're tired and sleepy, but not when you've zoomed 10 kilometers past your house. Or maybe I'm the one who's lonely. Talk to me, please.

I'm far from being the delicate doily, but I get an inexplicable sense of discomfort at the sight of the driver who noisily sucks on a toothpick. Sometimes you can still smell the paksiw na isda he's had for lunch. But the smell of pickled fish is a whole lot preferable to the stench of longganisa floating on a cloud of burp enveloping your consciousness.

He's sending three kids to high school, two to vocational school, and one to college. The eldest girl had to drop out after getting pregnant. His wife left him for another man. His grandmother died of tuberculosis 10 years ago. He was suckered by an illegal recruiter who promised to send him to Saudi. He's tired. He's sleepy. He's been driving for the past 23 hours. Now, can you please add 50 pesos to the fare? You can only afford 20. He makes a face and an annoyed clicking sound. He curses and makes his displeasure known by making his tires scream– another victim of an unjust society.

Listen: a cab is like a self-contained biosphere. While there is an absence of direct physical contact, essentially you and the driver share the same breathing space. But there are times when he seems to forget that Rexona won't let him down.

The asshole
In the ongoing holiday rush, this creature thinks he's God's gift to the urban commuter. In the rare event that you get one, most of them won't even have the courtesy to let you open the door. Instead, they'll roll down the window to first interrogate you about your destination. You reply. His head heavy with contemplation swivels slowly then stares into the distance, before his face squirms, like someone just farted. He shakes his head, closes the window, and speeds away.

Sometimes you just want to hold a sign that says where you're going. Or maybe the proper way is to first ask the cabbie, "Ah, but no. The question is: to which convenient paradise would you like to go, your highness?"

One time I witnessed this wonderful encounter while standing in line at a mall. A big, burly, stomachy man hailed a cab. "Saan ka?" the driver asked. The big man forced the front passenger door open, got in, and snapped: "Saan? Sa presinto tayo, t---ina ka. Magtatanong ka pa ha. Pulis ako!" Off they went, merrily, to parts unknown.

Sometimes, I think I'm in the wrong job.