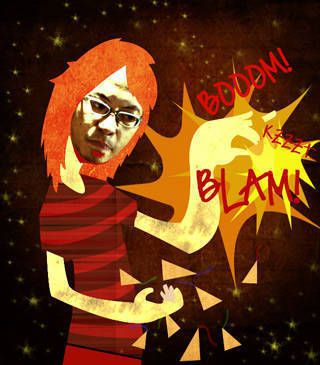 Lourd de Veyra: All is Quiet on New Year's Day

Our SPOT.ph blogger waxes pyrotechnical on the rebentador, piccolo, kwitis, 5-star, and the firecracker folly that Pinoy macho men do.

His name, believe it or not, was "Chewy." Or "Tsui." In those days, no one really bothered about spelling, although it was believed that his real name was the infinitely more humiliating "Matthew." He was a devilishly handsome young man, like an unhygienic Ace Vergel, except for one striking detail, especially after the early morning of January 1 sometime in the early '90s: while scavenging for unlit firecrackers from a pile of debris, something suddenly flared and caught his hand. Since that day, he earned a new nickname, "Putol" and while I'm not sure where he is now, I can tell you that he's definitely wearing his wedding ring on some other finger.

Noli de Castro's defunct Magandang Gabi, Bayan, was known for two wonderful annual traditions: the Halloween episode which featured spooky ghost stories and the post-New Year's Eve showing emergency rooms so astonishingly red they might as well be ads for a tocino brand. This was years before I knew what "schadenfreude" meant. Then again, it's like Kris Aquino– you realize how unpleasant it is, but it's impossible to take your eyes off the screen. But that's TV, and we were at an age where you think stuff like that only happened to other people.

But Chewy's accident and Magandang Gabi Bayan did not immediately stop us from playing with firecrackers. Many, many New Years after that incident, we continued to mess around with rebentadors and bawangs. But I don't exactly know when we stopped. This was sometime in the '90s, but you have to remember that on those dates, everything was a blur. Maybe it became difficult to keep up: stuff just got nastier and nastier by the year. Just when you thought you'd heard the loudest, the most powerful of them all, something meaner came along. The best hustling istambay – some kind of expendable guinea pig, the manufacturer perhaps thinks– was always the most resourceful, proudly showing off the new item to everyone like a newly smuggled firearm. That time, it was a rebentador the size of a brown envelope.

Now the Deparment of Health has been extremely vigilant in warning the public. "There are no safe firecrackers," advises Sec. Francisco Duque III, who could be seen on TV blowing into colorful cardboard trumpets to emphasize his point (Let it be said, however, that trumpets are only cool when they're Miles Davis' or Dizzie Gillespie's). According to the DOH, the 2008 Fireworks Injury Surveillance Report recorded an all-time low, with 733 cases from December 21, 2008 to January 5, 2009– said to be 28% lower than 2007.

But I remember a time when things were just monumentally nuts. As in Hezbollah-bathe-in-blood-psychosis-David-Koresh nuts.

This was some time between the late '80s to the early '90s. I've never been to Beirut but I imagine it would been like Bignay Street in Project 2. There was a time when the entire neighborhood was obsessed with firecrackers– and it did not really help that one of the biggest houses belonged to a family that was actually in the firecracker business, who gave away 5-stars and super lolos like campaign pamphlets. For countless Decembers, everyone had gotten so used to intense decibel levels, glass windows shaking, car alarms howling, and the histrionics of an irate neighbor waving a bolo in the street, crying for the blood of the punk who set off that big-ass blast. Our dogs–tough bastards who will chew anything from mailmen to metallic furniture– cowered in fear under the dinner table.

This was the time before cheap cable TV and videoke, and maybe people needed something to fill the emptiness in their humdrum lives. We knew that a rebentador blast could sting, but since we were young and stupid, that was also at an age when we thought amphetamines caused no harm to your brain. And playing U2's "New Year's Day" at full blast was a cool thing to do. This, too, was a time when nobody found anything wrong with consuming vast amounts of alcohol while playing with something called "Sinturon ni Hudas." Snaking through the entire street and consummating into a gigantic pile of rubber tires peppered with more bags of firecrackers, it might as well have been a genuine ammo dump. Some genius also thought it would be cool to throw in boxes of kwitis and other fireworks that were meant for airborne detonation.

You know that scene in Saving Private Ryan, the one where a disoriented Tom Hanks momentarily hears the battlefield as one high-pitched drone? That's the impression you get after more than 30 minutes of continuous, cranium-shattering blasts, with the occasional wayward rockets zipping in your direction and a blizzard of watusis swarming your hair. It's Satan's own bonfire itself. I swear, we could've left cracks on the earth's crater. The next day: broken windows and car windshields, a store that was almost burned down when a kwitis flew right into it, a street covered in a hysteria of soot and brown paper shreds, and a huge, ugly hole on where the apocalyptic pyre once was. Except for Chewy, we were unharmed, but we all knew something changed. Something with us burned along with the rubber tires and the roman candles. As to what, we could not explain. On that day, I did not love the smell of nitroglycerine in the morning.

More than 15 years after, we got our comeuppance. What we once thought of as demonically powerful firecrackers like pla-pla and bawang were now replaced by louder and more terrifying contraptions: PVC pipes converted into improvised bazookas. When kids fired them, those things made sounds that could make you wet your pants– and I mean that in a truly unflattering way.

Firecrackers– like drag racing, bungee jumping, running with bulls, moshpits, and shabu– are just some of the dangerously fun and stupid things that men do. Firecrackers are a macho obsession, no doubt about that. Men are always obsessesed with something bigger, longer, and louder. To be in the line of fire is to exhibit courage and bravery, which, on December 31, tended to be fueled by liquor (The amount of gin consumed is directly proportional to the bloodiness of injury). We continue to yearn for Magandang Gabi Bayan's blood-drenched post-New Year's Eve features, but it is one thing to laugh at drunken revelers with maimed digits. But a crying baby whose face was deformed by a wayward bullet isn't at all funny.

Just last week, from December 21 to 29 alone, the DOH has recorded 166 cases of firecracker-related injuries. It's a nine-percent increase compared to the same period last year. The Department of Health lists the top five firecrackers that caused the most injuries in 2008: piccolo, kwitis, 5-star, luces, and homemade or altered firecrackers. The last was number one on a separate list of firecrackers causing "blast burns with amptutation."

"Sumayaw na lang kayo ng 'Nobody, Nobody But You,'" counsels another DOH official, who, judging by the looks of his shirts, practices what he preaches.

Lourd De Veyra Lourd New Year Firecrackers
Your Guide to Thriving in This Strange New World
Staying
In? What to watch, what to eat, and where to shop from home
OR
Heading
Out? What you need to know to stay safe when heading out