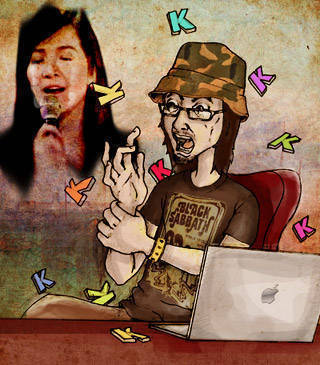 Lourd de Veyra: The unbearable heaviness of being 'K'

Our SPOT.ph blogger on "K": "More melodramatic than anything a middling ABS-CBN creative committee can concoct." 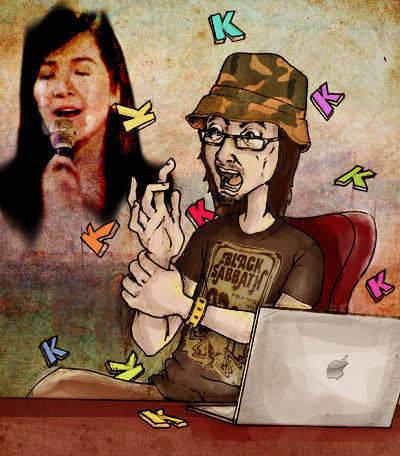 But what can I do? My fingers seem to have taken on a life of their own. Like that scene in Evil Dead 2. Well-loved cabinet members of a hated government die, earthquakes pulverize countries, Google pulls out of China, and spoiled army brats go Rambo on NBI agents, but all of them seem like mere footnotes to the incident at Valle Verde and that pronouncement on a Sunday gossip TV show. I was supposed to write something else, something more socially relevant and urgent, but I am left powerless, my digits could not help but stretch toward the fifth button–from the right; ninth if from the left– on the fourth row of my keyboard.

Look, I'm trying my best to write about another subject. But all that comes out is this:

These fingers are possessed by some illogical, execrable force. Forgive me. I am weak. There are other more pressing issues in the world, and this media space could have been put to better use–a call to raise funds for Haiti, a Jason Ivler fan club, or something like that. But there is truly something about that name that screws with the brain's motor cortex and cerebellum. I swore to myself never to write about K again but then again I remembered my past blog entries: topics about books, you get eight comments in over a span of weeks. The one about her drew 200 plus in a couple of days.

As such I cannot help but feel as if covered in an ugly gossamer of guilt. The least I can do is to retain some dignity by not spelling out her name. Henceforth she shall be simply referred to as 'K," which does not stand for "Allan K" but can also be symbolic of lot of other things if not for its Kafkaesque overtones. But in this case, the Kafkaesque protagonist–the one who wakes surrounded by a sinister set of circumstances beyond his comprehension–is not her.

K has that inexplicable power over us. The national pasttime, it seems, is not politics but the life of K, which has more twists and turns than several seasons of Lost. K, like weather in today's climate-change times, is the very embodiment of unpredictability. Sure, the constants are given. The high-pitched voice, the accent, the fashion tastes that tend to expose way too much skin than needed, etc. One thing is for sure, and that's you'll never predict what's going to happen next. Or it could be Schadenfreude, the malicious joy and pleasure we take in the fact that poor little rich girl–with all her endorsements, her media influence, and her pedigree–is always but a fleeting visitor to the gardens of lasting romantic bliss.

Our collective fascination is one that borders on perverse, but does not seem to affect her frightening power to peddle fabric softeners and a thousand other consumer products. We do not surround her. She–or at least her perennially smiling simulacra–surrounds us. From supermarkets to superhighways, her image, her likeness is omnipresent. Like carbon monoxide and karaoke, K is part of the urban environment, and with an insufferable voice, exerting an even greater power over her actual big brother, who is currently leading the rat race to Malacañang.

The alleged statement from one of the girl's relatives, "Now I know who not to vote for," does not exactly sound like a sweepingly devastating indictment against the political ambitions of K's brother. One person's opinion–whether true or not–does amplify the whole matter into a political issue. "Now I know who not to vote for" was certainly never uttered in any formal presidential forum. Certainly not by Villar, Gibo, or Dick. And I fail to see how one person's dissent can have calamitous consequences on a presidential campaign. It may, definitely, but only if K opens her mouth. And when she does, the littlest things go supernova.

But then again, that's just what exactly what we've all been waiting for. Not really for her to do something. That would be totally missing the point. What we're waiting for is for her to say something about it. Granting she really did go ballistic at Valle Verde. So what? As her hick cager husband himself said, K had every right to be angry. She da missus, after all. Some fangirl wants my publicly-known-as-very-much-married husband for a guidance counselor? It should be well within my purview to stuff five basketballs and bagfulls of health-tinapay down that fan's throat. And that's being kind. It's just so easy to shut yer trap. But what good would that do? At least for our perverse personal delectation. K only needed somebody to confide in, to be more specific, Boy Abunda plus a battalion of TV cameras in a well-lit studio. As my friend Gang wisely observed, talking to a good friend plus 92 million others must be extremely therapeutic.

You see, maybe our own lives aren't exciting enough. It may seem unfair to raise suspicions over the timing of her latest debacle with the start of her latest drama series. The life of K is infinitely more melodramatic and surreal than anything a middling ABS-CBN creative committee can concoct, even if on hallucinogens.

I should stop. There are more important things to write about.

But that's what I said to myself the last time.

Kris Aquino
Your Guide to Thriving in This Strange New World
Staying
In? What to watch, what to eat, and where to shop from home
OR
Heading
Out? What you need to know to stay safe when heading out