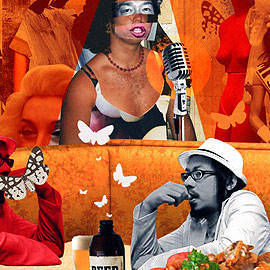 A Night at the Comedy Bar 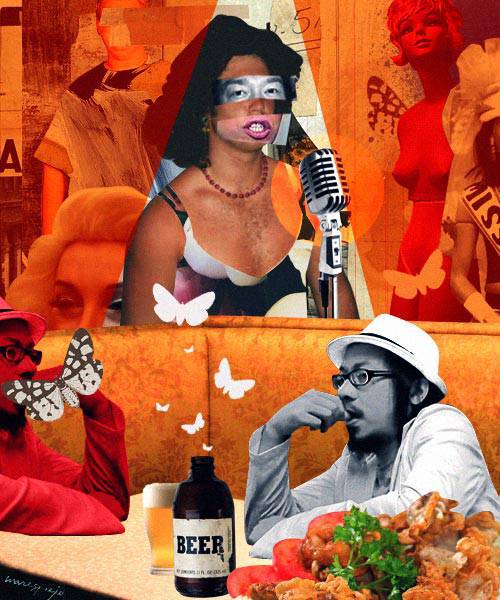 (SPOT.ph) The lady at the gate informs me of the 9:30 showtime. I pay P300 and find a seat. A video of a live performance by Toto plays on a white screen. Aside from mine, there are only four or five occupied tables. To pair with my beer, the waiter suggests their chicharon bulaklak.

Two guys-one is a cross-dresser-bounce onto the stage singing "Poker Face." After the song, warm greetings. But here they have a different concept of warmth.

One of the comedians takes notice of an unusually skinny guest. "'Yan, o! Mukhang walang kinakain." A little later, a comedian carries him to the stage like a slab of meat.  They bombard him with questions. They force him to sing a song. Then they spot a fat guy. They pull him to the stage. They also make him sing a song.  He picks "Laklak." Afterwards, more fat jokes.

The crowd roars. From out of the speakers, fake snare-drum rolls.

A little later, they pull to the stage three teenage boys. They are, as expected, barraged with insults drawn from every possible aspect of their appearances. There are also hints of sexual solicitation. "O sige, ganito na lang," said one comedian. "Pahalik na lang sa utong."

The boys' father, by the way, was in the audience.

Welcome to the world of the comedy bar, where the humor essentially depends on a sadistic miasma of insults that involve sex organs, skin color, body weight, racial stereotypes, necrophilia, the entire assortment of bodily fluids and diseases, penetration of various orifices, physical abnormalities, and imagined pornographic scenarios about celebrities. And that's just the first hour.

And I thought I was mean and rude.

But at least I wasn't masochistic, like those guests who choose to sit right in front of the stage. That's like buying a ticket to the zoo so you can walk straight into the tiger's cage.

After a barrage of insults, one of them approaches a table and borrows a bag. The other one gets a bag from another table. They both open and examine the contents.

Breathlessly they launch into the next gag:  A Miss Universe routine.

Out comes a bald gay guy who looks like a Hare Krishna guru: he's wrapped in a long, flowing white scarf. Over pumped-up house music, he sashays exaggeratedly to the mic. A voiceover supplies the names of countries.

The bald comic raises an armpit and pretends to fan an imaginary blast of odor reeking from it. He screams, and after a hyperbolically sunny smile, "Nagpapautang din ng payong!"

"Give it up for Miss Vietnam!"

Miss Mongolia giggles a lot, has crazy eyes. His fingers contort, crab-like. "Ako Budoy!" Miss Mongolia, it turns, out, is a 'mongoloid.'

Then our very own. "Ako si Miss Philippines. I believe in the saying, "Ang puking maluwag...punumpuno ng kabag."

Another song number. They spot a white guy in the crowd. "Sir, are you American?"

The white guy answers in the affirmative. "Have you tried being kidnapped by the Abu Sayyaf? You should visit Nepa Q-Mart. Payatas. Dakak. You know, Dakak...I suck!"

After I decide that I've had too much beer and chicharon bulaklak, I call it a night. It is around 12:30 and the place is packed. It is, after all, a Friday.

I'm outside. I can still hear them. I think about the 300 hundred pesos I paid at the door. Another song number. "Call Me Maybe." The crowd goes nuts.

Comedy Bar Filipinocomedy Comedians Lourd De Veyra
Your Guide to Thriving in This Strange New World
Staying
In? What to watch, what to eat, and where to shop from home
OR
Heading
Out? What you need to know to stay safe when heading out