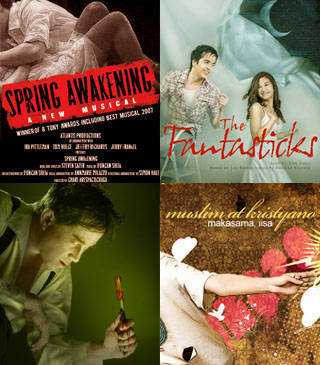 The Rest of the Year in Theater

For the rest of 2009, all the world's your stage. Here, SPOT.ph's rundown of must-see productions performances playing at a theater near you.

Neighbors Luisa and Matt fall in love against their fathers' wishes. A classic story of boy meets girl with a bit of a twist–sure it ends happily ever after, but not 'til a couple of years of being apart exploring the world on their own. "Try to Remember" is a catchy, sweet ballad that will be your LSS for days.

Catch This! Fantasticks is the longest-running musical in the world with 17,162 performances. It's perfect for Chick-Flick addicts and RomCom lovers.

What they Say: "There were naysayers who said that after creaking along for nearly 42 years, it had become 'The Anachronisticks.' There were those who found it so uplifting they called it 'The Optimisticks.'" - New York Times 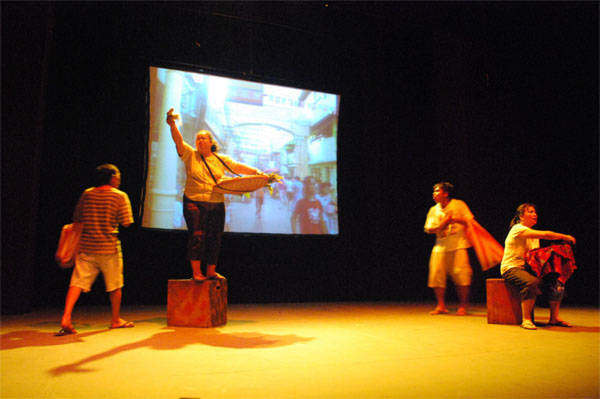 Ismail at Isabel is the tale of two kids from two different faiths, but friends nonetheless. When war breaks out in their small village in Mindanao, the violence and discrimination break them apart too. Changed forever, they're left with memories of their parents' folktales and of each other that they have to tell in order to find peace.

Catch This! This production was formed to mark the 20th anniversary of the Universal Declaration of the Rights of a Child, and it promises to be a haunting tale of art imitating life.

What they Say: "It's a call to action. A lot of the plays are about what's happening to the country and they're designed to wake the audience." Maribel Legarda, PETA's Artistic Director 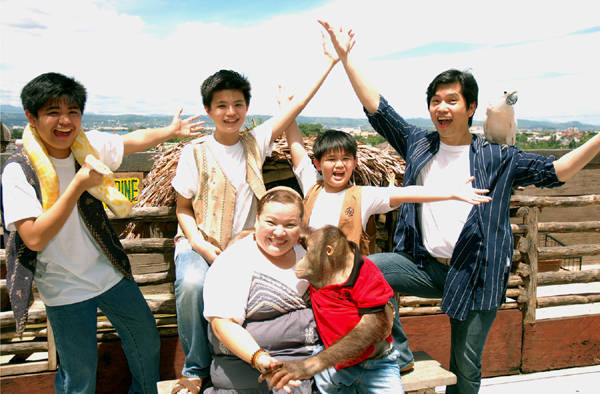 The classic bible story gets a couple of upgrades! First, all the pairs of animals won't be scary-looking puppets–they'll be played by real people. Second, it's a musical so it's sure to be chock-full of hopeful, inspirational songs. Last, it's made to cater to students, but it promises to bring out good laughs from the adult audience.

Catch This! Wholesome fun combined with catchy, original songs from Trumpets is the ticket for an outing with the entire family.

What they Say: " Aside from Noah's always relevant theme of hope and second chances, we address three of man's most vital relationships–man with God, man with his fellowmen and man with his environment. Concern for conservation and ecology–these are real concerns here and now." - Jaime Del Mundo, N.O.A.H.'s Writer and Director

Madonna Brava was based on the German drama, Mother Courage

Madonna Brava talks ala Cebuana Annabelle Rama, but she calls Mindanao her home. With three children coming from different ethnicities (Muslim Maranao, Lumad Subanen and Christian Filipino), it's no wonder her life is as colorful and unusual as the stuff she sells from her "mobile mini-bazaar". An adaptation of Bertoit Brecht's "Mother Courage and her Children", it's set during the Mindanao war where many innocent lives are sacrificed–including those who are loved the most.

Catch This! Who better to direct a play set in Mindanao than Direk Nestor Horfilla?   He's considered to be a pillar of Mindanaoan plays and was named as "Datu Pinahan-ay" by the City Government of Davao.

What they Say: "I wanted to make it because of the lullaby, this scene that we see over and over again in television, women just going 'Why?' over the body of their children. It's the whole thing for me." - Meryl Streep about taking on the role of Mother Courage

Who would have thought that its once-banned content of sexual discovery would win a Grammy and eight Tony Awards, one for even Best Musical? Duncan Sheik produced the alternative rock musical score of this play set in Germany during the turn of the century.

Catch This! The original ending of Act I would have had the female lead, Wendla, raped by Melchor, but Duncan Sheik and the songwriter thought that the song, "I Believe", which would be played during that scene, didn't evoke the violence of it. It would be interesting to see how far the Pinoy production will push the envelope with this controversial piece.

What they Say: "The boldest and most contemporary musical on Broadway!" - Time Magazine

"Brave, haunting and electrifying, it restores the mystery and the thrill to that shattering transformation that stirs in all of our souls. This gutsy new musical has a shivery, sensual allure unmatched by anything in theatre right now." - New York Times

Blanche Dubois (a role played by Vivien Leigh in the classic film) is an aging woman who would rather live in a fantasy world than the bleak reality of ill-mannered men and gloomy mistakes. With Blanche's statement, "I don't want realism, I want magic", plus the troubled household of Blanche, her sister Stella and Stella's husband, Stanley, Blanche's battle between what's real and make-believe drives her to insanity.

Catch This! Actresses Eula Valdes and Angel Aquino lend their star power to this production as they share the stage for the first time.

What they Say: "Playing Blanche DuBois tipped me over into madness." - Vivien Leigh about playing the role

It's a bloody gorefest as the Demon of Fleet Street takes centerstage. Sweeney Todd is out to get revenge on the judge who took away his daughter and raped his wife. With the help of Mrs. Lovett and her pie shop, the partners in crime find a gruesome–and dare we say, yummy–way to avenge Todd.

Catch this! For the thrill seekers and horror flick lovers, two of the best actors in musical theater will surely not disappoint.

What they Say: "It will also be dripping in blood–so much that I'll need a new costume in every scene because the Karo syrup and food coloring are hard to remove. Sweeney Todd's a dream role of mine." - Audie Gemora on playing Sweeney Todd

Madonna Brava A Streetcar Named Desire Ismail At Isabel Spring Awkeing Sweeney Tood Noah Fantasticks Madonna Brava Ng Mindanao
Your Guide to Thriving in This Strange New World
Staying
In? What to watch, what to eat, and where to shop from home
OR
Heading
Out? What you need to know to stay safe when heading out