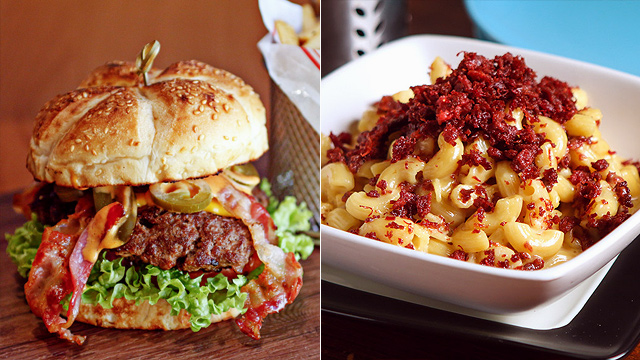 Your Guide to No-Fail Dining Spots at Eastwood City

Eating out sure gets confusing sometimes.

(SPOT.ph) You might know Eastwood City as one of the hip places you used to hang out in as a teenager. Now that you’re older, the neighborhood looks slightly different (thanks to the rise of Eastwood Mall), but it still feels the same. For one, Eastwood City still has a wide array of eating spots—and trimming down the options is still as difficult as ever. We round up a list of great restaurants for those times you’re in the area—you’re welcome.

K-barbecue restaurants aren’t rare these days, especially in the Metro, where hungry diners practically inhale samgyupsal (Let’s face it: We’re all guilty). The busy neighborhood doesn’t have a shortage of Korean grilling joints either, with at least one at Eastwood Mall and Eastwood City Walk. Soban K-Town Grill is a great option for satisfying those carnivorous cravings—besides their tasty à-la-carte offerings like Beef Ramyeon and Japchae, which can make you feel like you’re in your favorite K-Drama, they’ve also got great and affordable grilled-meat sets good for one person or even a group. Besides succulent pork belly, the Samgyupsal Set already includes bottomless rice, soup, and sides. We’re sold.

Did someone say crispy pata? Originally from the other side of Quezon City—specifically Diliman—Livestock Restaurant and Bar has finally branched out to somewhere more accessible, like Eastwood City. People come here for Pinoy favorites such as their best-selling Crispy Pata, which you can have either plain or spicy. It’s so tender, you can slice the meat with a popsicle! You’ll also love their flavorful Bagoong Adobo Rice with fresh mangoes and veggies on top—a great pair with any of their main dishes.

We’ve all had serious ramen cravings at least once in our lives. And when that time comes and you’re wandering around Eastwood, lucky you because there’s Hokkaido Ramen Santouka. Known as one of the first ramen chains to open in Manila, the Japanese noodle house specializes in Hokkaido-style ramen, as evident in their name. The secret lies in their cream-colored tonkotsu soup, which is cooked for hours using pork bones and vegetables. The Tokusen Toroniku is every ramen lover’s dream come true—that is if you’re a fan of thick and rich broths. The lighter Shio Ramen is another great option if you’re also planning to have your ramen with other dishes, like the tasty Kurobuta Gyoza or Tori Karaage.

There aren’t a lot of Denny’s in the Metro so stumbling onto one in the middle of Quezon City might be a surprise. The American breakfast chain is popular for their generous portions so it’s better to come hungry—after your morning jog, perhaps? The Original Grand Slam is a clear winner and definitely the star of each table. With two thick and fluffy buttermilk pancakes, bacon strips, sausages, and milky scrambled eggs, how can you resist? You’d want to have breakfast food all day if breakfast were this satisfying.

Although Japanese food has been all the rage in the Metro since God knows when, there are still a lot of under-the-radar Japanese dishes that many Filipinos aren’t quite familiar with, like Japanese curry. Let CoCo Ichibanya be your introduction to this spicy dish that’s a favorite in homes all over Japan. The strong aroma and deep color of Japanese curry might intimidate you at first, but don’t worry because CoCo Ichibanya lets you make the most out of your curry experience with their customizable meals. Mix and match your proteins and veggies, add cheese, or even adjust the rice serving and heat level of your curry—there are so many possibilities. But if you’re the eat-and-run kind-of person, they also have set meals, which you can choose from. A crowd pleaser is the Pork Cutlet & Vegetables Curry, with succulent deep-fried tonkatsu, steaming white rice, and cubed veggies swimming in their signature broth.

Buffets are probably everyone’s go-to on special occasions like birthdays and anniversaries. And you don’t have to worry about ordering a dish that everyone will love because, let’s face it: Ordering for a big group requires special talent. That’s why affordable buffets like Sambo Kojin are a godsend. What’s special about this place is it can sate your Japanese and Korean food cravings at the same time! Ebi tempura? Check. Korean barbecue? They have it. We know where to celebrate that next office party. Rates start at P688.

Head over to Señor Pollo if you’re looking for a place with great grub and drinks. Although the Latin American joint became popular for their juicy roast chicken, you can’t miss their other tasty items like the quesadilla, fully loaded nachos, and pork sisig. Señor Pollo also has one of the best drinks offerings in the neighborhood—here, you can get signature cocktails for less than P150! The Latin Punch will surprise your taste buds with its zesty and refreshing flavor (thanks to the citrus), not to mention its boozy contents that can, indeed, give you that punch you need to start the night.

When it comes to smoky, sticky, and sweet ribs, expect Big D’s Smokehouse to be at the top of their game. The smokehouse boasts huge platters of grilled and smoked specialties like barbecued bone-in ribs, pulled pork slathered in their signature sauce, spicy buffalo wings, as well as the crowd-favorite Hush Puppies, or deep-fried cheese nuggets filled with three kinds of cheeses and roasted pimientos. Don’t forget to dip each morsel in their homemade garlic-ranch dip to make each bite even better!

You might have remembered this little taco stall in Greenhills from you childhood (FYI, it’s still there!). The good news is they’ve branched out to Eastwood City so you can get your Fil-Mex favorites whenever you’re in the neighborhood. For a taste of nostalgia, go ahead and order the Crispy Tacos, a.k.a. everyone’s go-to afternoon snack. For only a few bucks, you’ll get two servings of crispy tortilla shells filled with ground beef, shredded cabbage, tomatoes, and cheddar that are enough to fill you up until dinner time. If you’re hankering for something unique, go for the Spicy Beef Enchiladas, with a hot oven-baked tortilla that’s stuffed with veggies, cream cheese, and a deliciously tangy tomato sauce.

Don’t let their mystical aesthetic scare you—if anything, their wide array of worthwhile eats and local craft beer have the power to lure you in like a spell. Conceptualized by a group of young professionals, Salamangka has everything you’ll need from day to night, starting with an excellent cup of single-origin coffee. When you’re feeling hungry, they also have some tasty dishes, like the Corned Beef Mac and Cheese or the Itlog na Maalat Pakpak, fried chicken blanketed in a special salted-egg coating. For that much-awaited night cap, a big glass of Engkanto Brewery beer might do the trick.

What are you looking for today?
More stories from Spot.ph

Big D's Salamangka Soban Eastwood Denny's Coco Ichibanya Livestock Senor Pollo Kamicos Santouka Guide Sambo Kojin
Your Guide to Thriving in This Strange New World
Staying
In? What to watch, what to eat, and where to shop from home
OR
Heading
Out? What you need to know to stay safe when heading out