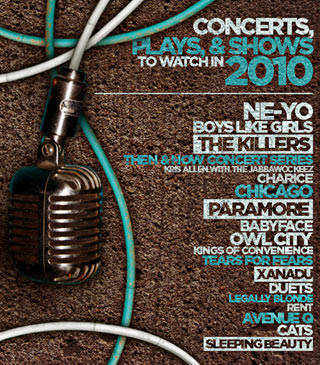 SPOT.ph gives you the lowdown on foreign acts, concerts and plays that you should clear your calendars for.

This year, Manila will play host to rock bands, Broadway musicals, and an American Idol.

Postponing an earlier Manila concert in 2009 to star in a movie produced by Denzel Washington, R&B star Ne-Yo will be in Manila this January. Expect to hear his biggest hits, ''Because of You,'' ''Addicted,'' ''So Sexy'' and ''Go On Girl," along with new songs "Closer,'' ''Mad,'' ''Miss Independent'' and ''Part of the List" from his third and current CD, Year of the Gentleman.

Boys Like Girls, the rock band from Boston, Massachusetts, has sold more than 3 million digital singles - including 1.5 million copies of "The Great Escape," 900,000 copies of "Hero/Heroine" and 600,000 copies of "Thunder." They are set to perform with Hed Kandi's DJ Andy Norman, Johnboy Lee and Peyton at the SMX Convention Center.

Kris Allen, winner of the latest season of American Idol, will be joined by all-male hip hop dance group, Jabbawockeez. Allen's self-titled album debuted at number 11 on the US Billboard 200 in 2009.

Charice Pempengco's Valentine concert features Erik Santos, George Yang and Ogie Alcasid as special guests. Charice, who gained worldwide recognition when she appeared in Ellen and Oprah, will perform a repertoire of pop, R&B and soul.

Catchy pop tunes and incredible dance moves made the Backstreet Boys one of the most popular boy bands in the '90s. Multi-Grammy nominated with their first seven albums reaching top ten on the US Billboard 200, Nick Carter, Kevin Richardson, Howie Dorough, Brian Littrell and A. J. McLean were among the world's highest-paid live entertainers.

Tickets to be released soon, contact Ticketnet at 911-5555 for updates.

Babyface
When: March 10, Wednesday, 8 p.m.
Where: Araneta Coliseum
Ticket prices: to be announced

Making music in his parents' basement because of bouts with insomnia, Adam Young's project spawned the hit song, "Fireflies," which became one of the most downloaded songs on iTunes in the United States in 2009. 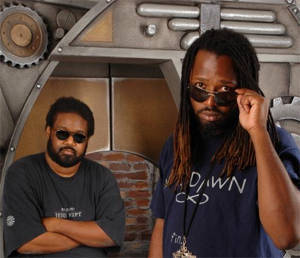 A live production with an all-star, old-school lineup composed of hit artists from the '90s singing all their greatest hits. A number of foreign acts will perform favorites that local fans are familiar with, like "Fast Car" and "Set Adrift on Memory Bliss."

Kings of Convenience
When: March 31, Wednesday, 8 p.m.
Where: Venue to be announced

Tears for Fears
When: May 2, Sunday
Where: Araneta Coliseum
Ticket prices: to be announced

The pop-rock duo is one of the music icons of the 1980s, with their hits "Mad World," "Shout,"and "Everybody Wants to Rule the World." Their Manila stop is part of their South East Asian tour for 2010. 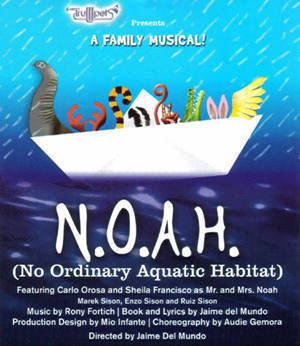 Trumpets retells the classic story of the Biblical patriarch and his famous ark with heart, compassion, hope and joy with another original musical, N.O.A.H. (No Ordinary Aquatic Habitat). Carlo Orosa will play Noah and Sheila Francisco stars as Mrs. Noah. 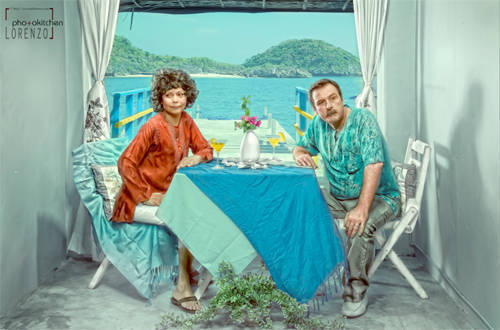 Peter Quilter's Duets has four different vignettes with four sets of characters. Set in glorious comedy, the play explores the hilarious nuances of love in seemingly impossible, but extremely funny situations. The staging by Repertory Philippines will be directed by Ana Abad Santos. Veteran actors Joy Virata and Miguel Faustmann will take on all four sets of characters. 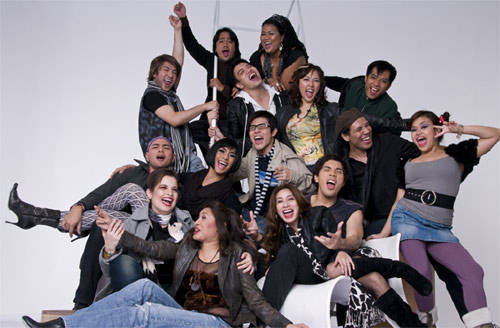 Based on Giacomo Puccini's LA BOHEME, RENT, written by Larson, is the story of Bohemian New Yorkers Mark, Roger, Maureen, Tom Collins, Angel, Mimi, Joanne, and their friends -- all struggling to survive during the rise of a mysterious, deadly disease, AIDS, and the ever prevalent economic crisis in the late '90s. 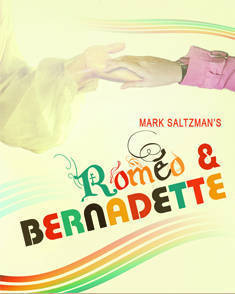 This musical comedy is a take-off from Shakespeare's Romeo and Juliet. In this version by Repertory Philippines, Romeo does not die but takes a sleeping potion and wakes up on Broadway in 1960. He doesn't fall in love with Juliet. Instead, he runs after someone he thinks is Juliet. 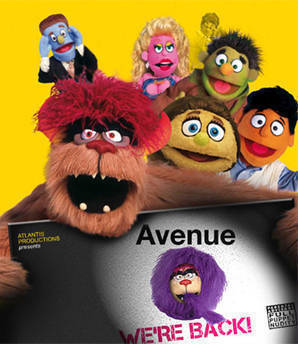 Inspired by the characters of Sesame Street, Avenue Q is set in the boroughs of New York, with puppet characters sharing the stage with human actors. Several characters are parodies of those from Sesame Street: roommates Rod and Nicky are based on Bert and Ernie, while Trekkie Monster is based on Cookie Monster. Avenue Q's quirky characters, however, deal with adult problems and sex. Homosexuality and purpose are recurring themes in both dialogue and music. Rachel Alejandro stars.

Based on the book by Heather Hach and music and lyrics by Laurence O' Keefe   and Nell Benjamin, Legally Blonde tells the story of Elle Woods, a girl who enrolls at Harvard to win back her ex-boyfriend, Warner. Nikki Gil stars as Elle Woods. 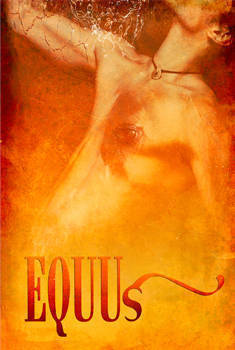 Peter Shaffer's powerful, riveting drama invades the dark corners of the human psyche.   The play focuses on the naked reality of what contemporary society can do to the human soul. 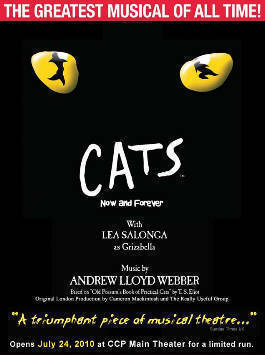 With magnificent music composed by the legendary Andrew Lloyd Webber, including the poignant hit song "Memory," an imaginative set, inspired choreography and stunning costumes, Cats is a brilliant song and dance spectacular not to be missed as it makes its premiere in Manila.

The story is based on a series of poems by T.S. Eliot. The stage set is a garbage dump, three times larger than life, where the Jellicle Cats come out to play. It is the night of the annual Jellicle Ball when their leader, Old Deuteronomy, will announce the name of the cat who will be reborn to a new life in the Heavyside Layer. The announcement will be made just before dawn. While they wait, the cats amuse themselves (and us!) with stories of famous cats of the past and present. Dawn comes and Old Deuteronomy gathers the cats together for his announcement of the name of the cat to be reborn. Lea Salonga stars. 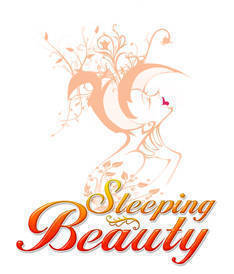 A new look at an old, old tale: Sleeping Beauty is not only the spellbound beauty, the Prince is an enchanted Faun, and his kisses release more than one spell, to the dismay of the wicked Fairy Trollarina.

A musical-comedy based on the cult film of the same name, the musical tells the story of a Greek muse, Clio, who descends from Mt. Olympus to Venice Beach, California in 1980 on a quest to inspire a struggling artist, Sonny.   But when Clio, disguised as an Australian roller girl named Kira, falls into forbidden love with the mortal Sonny, her jealous sisters take advantage of the situation, and Clio risks eternal banishment to the underworld.

Inspired by Ingmar Bergman's film, Smiles of a Summer Night, with music and lyrics by Stephen Sondheim, the musical stars actress Dawn Zulueta and is about several couples, mismatched lovers and the romantic complications as they spend a deliriously mad-capped weekend at a country estate. It is a whimsical and magical musical that asks whether love is the meaning of life. It also features the most popular song in the Sondheim catalog, "Send in the Clowns," and is the winner of six Tony Awards including Best Musical. 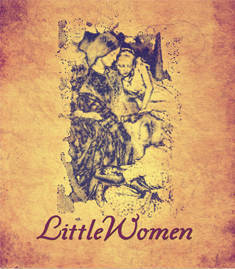 Louis May Alcott's classic tale is set to music by Jason Howard, lyrics by Mindi Dickstein. The story, with its warm, feel-good theme focuses on the March family, Marmee and her four girls, and is a timeless reminder of what family is truly all about.

Bands Concerts Plays
Your Guide to Thriving in This Strange New World
Staying
In? What to watch, what to eat, and where to shop from home
OR
Heading
Out? What you need to know to stay safe when heading out