SPOT.ph remembers President Corazon "Cory" Aquino with a list of her most memorable quotes. 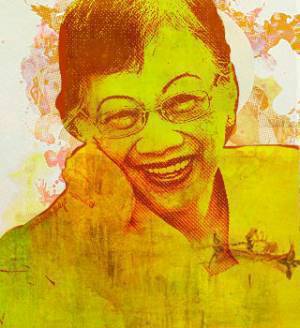 President Corazon "Cory" Aquino blazed a trail when she became the 11th President of the Philippines. She started out as a reluctant leader--but she later became one of the most loved public figures in the country and the world. It wasn’t just because she was the first woman elected as the Philippines’ commander-in-chief. She had class, grace, and compassion. She had magic. In memory of the lady in yellow, who died at 76 last August 1, 2009, SPOT.ph lists 10 of her most memorable quotes. Of course, no list can ever encompass her whole life. We know that she said so many more wise words. We’re sure you’d have a list of your own to remember her by.

"I told my children that this is something that we should do for dad." --Aquino addressing the public, explaining why she and her children were coming back to the Philippines from Boston shortly after her husband Senator Benigno "Ninoy" Aquino, Jr. was assassinated on August 21, 1983

"I’m too old. I’m 52. I have tried marriage. I had a happy marriage...and I think that part of me died with Ninoy." --Aquino’s answer when a viewer in the August 20, 1985 episode of Atty. Ric Puno, Jr.’s Viewpoint asked, "If you fall in love again, would you consider marriage?"

"And now, I would like to appeal to everyone to work for national reconciliation, which is what Ninoy came back home for. I would like to repeat that I am very magnanimous in victory. So I call on all those countrymen of ours who are not yet with us to join us at the earliest possible time so that together we can rebuild our beautiful country." --from Aquino’s speech when she was proclaimed president at the Club Filipino, San Juan, Metro Manila on February 25, 1986

Cory Aquino delivers a brilliant speech before the joint session of the United States Congress in Washington, D.C. on September 18, 1986.

"Yet, to all Americans, as the leader to a proud and free people, I address this question: Has there been a greater test of national commitment to the ideals you hold dear than that my people have gone through? You have spent many lives and much treasure to bring freedom to many lands that were reluctant to receive it. And here, you have a people who want it by themselves and need only the help to preserve it." --from Aquino’s speech before the joint session of the United States Congress in Washington, D.C. on September 18, 1986

"I’ve reached a point in life, where it’s no longer necessary to try to impress. If they like me the way I am, that’s good. If they don’t, that’s too bad." --Aquino quoted in Pico Iyer’s January 5, 1987 TIME magazine article, when Aquino was chosen as Woman of the Year

"I am not a hero like (Nelson) Mandela. The best description for me might, after all, be that of my critics who said: She is just a plain housewife." --from Aquino’s speech upon receiving the the Fulbright Prize at the U.S. Department of State, Washington, D.C. on October 11, 1996

"I tell them I don’t have any formula for ousting a dictator or building democracy. All I can suggest is to forget about yourself and just think of your people. It’s always the people who make things happen." --quoted in a TIME magazine article by Sandra Burton

Cory Aquino bowed out gracefully in her last SONA on July 22, 1991.

"I like to think that there’s a quota for suffering and that all of us have certain quotas. I felt I had filled up mine." --from an interview done sometime in 2008

"Our guiding light should not be an obsession to evict the President from Malacañang. Given our concern to protect the pillars of our democracy, the extra-constitutional removal of the President is not an ideal we would want to aspire for. But in an environment where abuse of power, in the face of weak democratic institutions, closes all doors of legitimate redress, sadly, we are too often pushed to the brink." --from Aquino’s speech delivered on February 26, 2008, a day after the 22nd anniversary of EDSA I, when the calls for President Gloria Macapagal-Arryoyo’s resignation intensified

Hudreds of thousands of Filipinos bid Cory Aquino farewell in 2009.

"I would rather die a meaningful death than to live a meaningless life." --one of the popular quotes attributed to Aquino