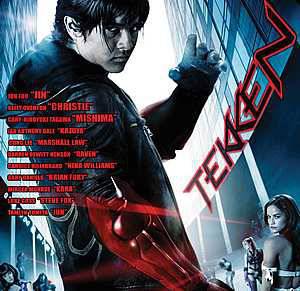 Our SPOT.ph movie reviewer wasn’t quite taken with "Tekken."

I’ve never played the video game Tekken, but I do know how popular it is among gamers all over the world. And so, as I watched the new movie that’s based on it, all I could think of was this: if I’m so unimpressed by the film, how bad must the fans of the game feel, considering that so many of them have spent hundreds of hours in the world of Tekken, obsessing over the characters and even assuming their personas in the virtual world?

Tekken the movie is set in the near future, a time when giant corporations are now running the show after governments all over the world made a mess of things. Periodically, these corporations (called Tekken) hold the gladiator-style Iron Fist competition to entertain the masses and earn money for those who gamble on the outcome. Jin Kazama (Jon Foo) works in the black market in the outskirts of his Tekken-controlled city. After his mom is murdered, he decides to join the contest even after she told him not to. What Jin doesn’t know is that his decision to fight will not only shake the foundations of the Tekken empire, but will also unearth shocking details about his parentage.

For those like me who have never played the video game, the Tekken movie’s storyline is a ho-hum affair that follows the formulaic structure of other blood sport movies like Gymkata and well, Bloodsport, with a paternal twist borrowed from The Empire Strikes Back for added drama. Disappointingly, the fight scenes in Tekken are not remarkable or impressive in any way. Even the low-budget 2003 Thai movie Ong-Bak made a more lasting impression with its eye-opening depiction of Muay Thai. Worse, Tekken’s "I am your father" twist packs none of the emotional wallop of the Star Wars sequel, simply because the character of Jin, as fleshed out by scriptwriter Alan B. McElroy and played by real-life martial artist Jon Foo, isn’t invested with enough qualities to make you give a hoot who his parents are. For one, Jin’s relationship with his mother Jun (Tamlyn Tomita), doesn’t make dramatic sense. In several flashbacks, his closeness to her is emphasized. Whey then, after she is killed, does Jin decide to join Iron Fist even though she expressly forbade him from doing so just before she died? For normal moviegoers, such inconsistencies in a character’s behavior are bad enough, but what about the fans of the game? How much more annoyed must they be with these and other radical changes made during Tekken’s journey from game console to the silver screen?

The movie doesn’t even try to dazzle viewers with images, whether real or computer-enhanced, that would distract them from the story’s shortcomings. At least The Prince of Persia (to recall another recent film that was inspired by a video game) had those expensive special effects and exciting skirmishes. Tekken has none of these. The fight scenes, as mentioned previously, are unremarkable, and so is the movie’s look as a whole. That Tekken is one of the world’s most successful video game franchises appears not to have impacted the movie’s budget. Apparently, there was no money to hire a good fight choreographer for the film, not enough cash to design and build magnificent sets. In fact, the arena where the Iron Fist clashes take place looks like a warehouse disco. So much for cinema’s power to transport us to worlds and places we’ve never been to, especially for a movie like Tekken, which is set in the future!

Also indicative of the movie’s low-budget is the casting. Though the actors and actresses portraying Tekken characters like Jin Kazama, Steve Fox, Anna, Nina, Ling Xiaoyu, and Christie are not bad on the eyes, more experienced and talented performers would certainly have helped to humanize the characters and give them more depth beyond what gigabytes and pixels do to animate a person created for a video game. Whether or not you’ve played Tekken, however, one thing is certain: you deserve a better movie for your money than this one.

Tekken Moviereview Pauldaza
Your Guide to Thriving in This Strange New World
Staying
In? What to watch, what to eat, and where to shop from home
OR
Heading
Out? What you need to know to stay safe when heading out