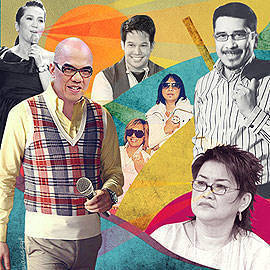 Top 10 People You Don’t Want to be Interviewed By

SPOT.ph lists 10 Pinoy interviewers who can make mincemeat out of their subjects.

Interviews can make or break personalities. We love it when there’s verbal sparring between the interviewer and the interviewee. But--though we may not admit it--we love it even more when interviewers dig up some new dirt or push their subjects to reveal more than they intend to. SPOT.ph lists 10 Pinoy interviewers who can make mincemeat out of their subjects. Some do it via in-your-face tactics, while others operate in more subtle ways. Either way, you’d have to be either very brave or utterly foolish to let them place you in the hot seat. Bottom line: You better steer clear of these interviewers if you’ve got something to hide or have no sense of humor.

Bio basics: In a Sunday Inquirer Magazine article, Ruel S. De Vera wrote that Maverick Relova and Ariel Villasanta stand out because of their "stream-of-subconsciousness repartee," "wild wardrobe," and because "they say what's on their mind and dress however way they please in a winning combination of eccentricity and effusiveness." The two comedians--who first gained fame with their mockumentary-style TV show The Misadventures of Maverick and Ariel--have made a career out of heckling and pestering people in TV-5’s Totoo TV. But make no mistake about it--the two are way sharper than they seem. (Note: We’re counting them as one person in this list.)

Query tactics: They disarm you with their wacky ways. Once you’re at ease, the two keep making you laugh until you’ve let down your guard completely. That’s when they either ask you crazy questions of make you do silly things. In the past, they even convinced former vice president Teofisto Guingona, Jr. to do his best impression of Gollum from The Lord of the Rings series.

Ricky Lo lets his subjects shine or sink all on their own.

Bio basics: Compared to his flashier colleagues, Ricky Lo is pretty tame. In fact, this longtime showbiz scribe is considered one of the most reliable in the industry. He writes a column for The Philippine Star, one of the country’s most popular broadsheets.

Query tactics: Lo is so consistently calm that his subjects will, at some point, ask themselves, "Am I so boring?" They certainly don’t want to be labeled boring--so they end up revealing "juicy" information. Amazingly, Lo’s laid-back "reverse psychology" continues to work.

Bio basics: We all know who she is. President Noynoy Aquino’s youngest sister is not called the "Queen of All Media" for nothing. She’s smart, articulate, and persistent. If talking were a sport, she’s be declared champion in every gabbing tilt.

Boy Abunda’s distinct voice alone can break down your defenses.

Bio basics: This talent manager and TV host has had a showbiz-oriented show since 1994. These days, he hosts a daily entertainment news show (SNN: Showbiz News Ngayon), as well as two weekly shows (The Buzz and The Bottomline with Boy Abunda). And, oh, he’s also Kris Aquino’s best friend.

Query tactics: His booming voice will break down your defenses, while pop psychology tools (the mahiwagang salamin or magic mirror) will make you cry over things you haven’t thought of in years. He’s like an interactive slambook who will make you define love and give a blow-by-blow account of all the moments in your life where you felt it.

Every encounter with Lolit Solis is always loud...and that can sometimes be a good thing.

Bio basics: TV host Solis is also talent manager who functions as a surrogate mom to her talents. She is currently one of the hosts of GMA-7’s Startalk.

Query tactics: Solis uses kanto-speak when she talks to her interview subjects. This makes them think that it’s alright to say anything. Besides, they probably think that Solis is just killing time until she can read her long list of people who want their named read aloud on national TV.

Bio basics: The information in her Wikipedia entry may explain why Fermin is so good at digging up showbiz dirt: "She finished Criminology at the Lyceum University of the Philippines." (We assume that this information is true.) The controversial TV host always seems to have unnamed sources who tell her the most salacious showbiz news. Fermin is currently one of the hosts of TV-5’s aptly-titled shows Paparazzi and Juicy.

Query tactics: She reveals titillating tidbits along with her questions. Her subjects then have no choice but to discuss the so-called "dangerous" details. You don’t want to answer Fermin’s questions if you don’t have your story straight.

Who’s crazy enough to take on John Lapus and his lie detector?

Bio basics: Comedian Lapus is also one of the more exciting TV hosts around. (Plus, he looks a bit like The Dawn’s Jett Pangan.) Though he started out as a researcher for ABS-CBN’s Showbiz Lingo back in the 90s, he is now one of the hosts of GMA-7’s Showbiz Central

Query tactics: For his "Don’t Lie to Me" segment in Showbiz Central, Lapus has his subjects strapped to a lie detector. Needless to say, many celebrities have unwittingly told the truth.

Query tactics: This guy wields his sarcasm like a scalpel--and those who aren’t too quick on the uptake end up exposing themselves to the public.

You don’t want Ben Tulfo going after you.

Bio basics: Newspaper columnist, radio commentator, and TV host Ben Tulfo is one of the famous Tulfo brothers (Ramon, Raffy, and Erwin) who are also in the same line of work. However, while Ramon and Raffy have mellowed and Erwin is tamer, Ben has remained uber macho in every way. In his show, Bitag, where he hunts down scam artists and other criminals, he’s seems ready to throw punches when necessary.

Query tactics: His mere presence alone is enough to intimidate you. When he thinks his interview subject is the guilty party, Tulfo lets it rip (expletives and all). His line of questioning is akin to an hardcore interrogation.

Bio basics: This political commentator, professor, economist, and writer is often tapped to explain complex issues such as Senator Manny Villar’s controversial involvement in the C-5 project. She is also a killer interviewer. We will never get tired of referring to the time when she practically skinned alive presidential son and Congressman Mikey Arroyo on national TV.

Query tactics: Monsod asks questions like a drill sargeant. (That is, a drill sargeant with a Ph.D. in Economics.) If your IQ is too low, she chews you out. Just ask Mikey Arroyo.

Winnie Monsod Bentulfo Johnlaous Motwister Cristyfermin Rickylo.krisaquino Boyabunda Maverick Relova Arielvillasanta Lolit Solis Solita Monsod
Your Guide to Thriving in This Strange New World
Staying
In? What to watch, what to eat, and where to shop from home
OR
Heading
Out? What you need to know to stay safe when heading out