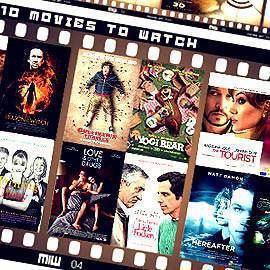 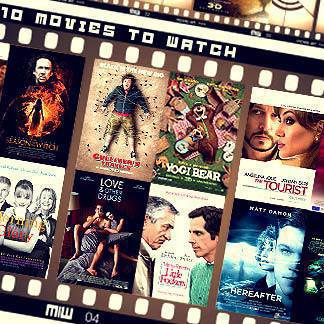 7. Love and Other Drugs
Genre: Romantic Comedy
Running time: 112 min.
Director: Edward Zwick
Writers: Charles Randolph, Edward Zwick, Marshall Herskovitz
Stars: Jake Gyllenhaal, Anne Hathaway, and Judy Greer
Synopsis: Maggie(Anne Hathaway) is a free-spirited and independent woman who won’t let anyone or anything stop her from doing what she wants to do. Jamie (Jake Gyllenhaal) on the other hand, is a ladies’ man who gets his way with girls easily, thanks to his charm. The lives of the two completely change when they meet each other and find themselves under the influence of the most powerful drug--love.
Opens on: Opening date to be announced

8. Yogi Bear
Genre: Animation, Adventure, Comedy
Running time: 80 min.
Director: Eric Brevig
Writers: Jeffrey Ventimilia, Joshua Sternin, and Brad Copeland
Stars: Dan Aykroyd, Justin Timberlake, and Anna Faris
Synopsis: A documentary filmmaker visits Jellystone Park for his latest project and comes across the infamous Yogi Bear and his sidekick Boo-Boo. Ranger Smith from the original animated series is also present in the film and continues to get bugged by the crazy antics of Yogi and Boo-Boo.
Opens on: Opening date to be announced

9. Season of the Witch
Genre: Adventure, Drama, Fantasy
Running time: 113 min.
Director: Dominic Sena
Writer: Bragi F. Schut
Stars: Nicolas Cage, Ron Perlman, Stephen Campbell Moore, and Stephen Graham
Synopsis: A 14th century crusader (Nicolas Cage) and his comrade (Ron Perlman) return to their homeland after a Black Plague. The two are commanded to transport a suspected witch to a remote abbey. More characters join them in their mission as they try to battle the forces of the wilderness and find out the fate of the girl.
Opens on: Opening date to be announced

10. Bulong
Genre: Horror
Running time: Not available
Director: Chito S. Rono
Stars: Vhong Navarro, Angelica Panganiban, and Bangs Garcia
Synopsis: Bulong tells the story of a nurse (Vhong Navarro) who desperately wants to be noticed by the girl of his dreams (Bangs Garcia). The nurse seeks the help of a paranormal expert (Angelica Panganiban) who tells him to whisper his wish to the dead. He gets what he asked for, but his actions lead to mysterious incidents.
Opens on: Opening date to be announced