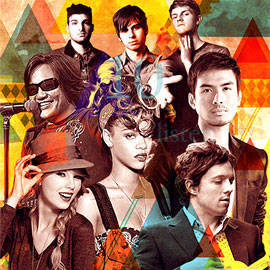 The latest from Rihanna, Jason Mraz, and Taylor Swift. Plus, winning local sounds by Ebe Dancel, Christian Bautista, and more! 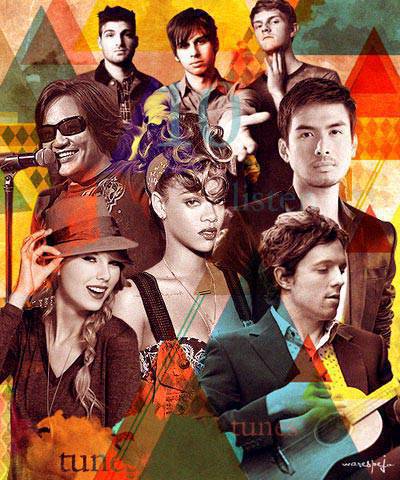 You can always count on Rihanna to give you an LSS-inducing song. Her lyrics may lack poetry, but her jam makes up for it. Following the success of her first single, "We Found Love," off her sixth studio album Talk That Talk, the 23-year-old pop star drops "You Da One"-an electropop tune infused with irresistible reggae beats and a dubstep break towards the end, which adds zing to the track.

Fun fact: The music video for this track, directed by Melina Matsoukas (who also directed "We Found Love") was shot in Ireland and London.

You don’t need a lot of elements in this music video-just a couch, Ebe Dancel, his guitar, a simple melody with his soulful voice, and you’re hooked. Here, he flawlessly sings about staying true to yourself. It's an age-old struggle, which he tackles in a new light in this sweet-sentimental tune.

Fun fact: Dancel posted on his Facebook page that he is already working on his next music video for his upcoming single "Paalam Kahapon."

Finally, a new track from the American singer-songwriter. Jason Mraz released the lyric video of "I Won't Give Up" last week-a teaser of sorts for his upcoming and still untitled fourth album. The honesty of the words combined with the heartwarming acoustics is enough to leave you wanting more. If this represents his new album's sound, who can complain?

Fun fact: According to Billboard.com, Mraz's album is set to come out in the first half of 2012.

You will never look at T-Swizzle the same way again. The country singer shows off her vocal prowess as she croons in this dark yet tender lullaby with the power duo, The Civil Wars. The Hunger Games single is far from Swift's usual country-pop and ballad tunes, but features an enchanting folk sound. Looks like the odds are ever in her favor.

Fun fact: On December 23, 2011, Swift announced via Twitter the release of this song.

The Kitchen Musical cutie is busy promoting his first international album titled Outbound featuring the carrier single "All That's Left." There's no denying that his balladeer vocals are spot-on as he sings about finding the right kind of love. See cosplay queen Alodia Gosiengfiao in the video, too.

Fun fact: According to Universal Records Philippines, Outbound includes collaborations with artists and producers from Singapore, Korea, Indonesia, Japan, and the United States.

It seems like there’s no track in Foster the People’s lineup that one wouldn’t like. Their third official single is catchy, dance-y, and with an intense, paint-splattered car chase music video to boot. Plus, there’s that trippy whistling and slightly disturbing yet effective evil laugh by frontman Mark Foster.

Fun fact: The music video features Precious actress Gabourey Sidibe, who shares a kiss with Foster towards the end.

Local band Spongecola is set to come out with the music video for their latest single this month. "Stargazer," taken off their album Araw Oras Tagpuan, features their well-loved rock sound. Frontman Yael Yuzon belts out his trademark raspy voice.

Fun fact: According to PEP.ph, nine out of 12 songs in the album were written or co-written by Yuzon.

Song: "Better Thank I Know Myself"

American Idol alumnus Adam Lambert is back with a vocally powerful single from his upcoming album, Trespassing. The mid-tempo track combines pop, rock, and ballad elements with Lambert’s remarkable range. Just listen to the falsetto in the chorus!

Fun fact: Lambert’s new album Trespassing is set to come out in March.

Before their next single comes out, make sure you listen to this rocking love song from Kamikazee. The boys show their romantic side without losing that distinct Kamikazee sound.

New Tunes Newsongs Taylorswiftsafeandsound Adamlambertbetterthaniknowmyself Fosterthepeopledon’tstop Newmusic Hottracks Rihannayoudaone Ebedancel
Your Guide to Thriving in This Strange New World
Staying
In? What to watch, what to eat, and where to shop from home
OR
Heading
Out? What you need to know to stay safe when heading out