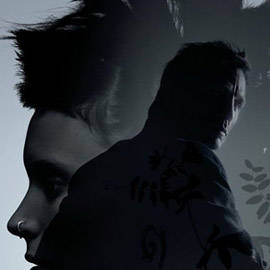 MOVIE REVIEW: The Girl With The Dragon Tattoo

Is the 2011 Hollywood version better than the Swedish one? Paul Daza weighs in on the "beautifully shot, powerfully acted and breathlessly paced" thriller. 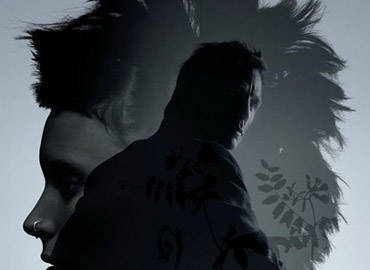 (SPOT.ph) This review of The Girl With The Dragon Tattoo consists of two parts. The first part is a "stand alone" evaluation of the new English language version that's in theaters now. The second part compares 2011 film with the Swedish language version that was made in 2009 (but released in Manila cinemas only in late March 2011). And though both films are based on Stieg Larsson's 2005 bestseller, I won't refer to the book in this review again because I haven't had the pleasure of reading it.

Starring Daniel Craig and Rooney Mara, The Girl With The Dragon Tattoo is the disturbing new serial killer drama from director David Fincher, whose previous forays in the genre include the searing Se7en and the frightening Zodiac. Rated R-18 by the MTRCB with no cuts, Dragon Tattoo is about a disgraced journalist, Mikael Blomkvist (Daniel Craig), who is hired by wealthy Swedish industrialist Henrik Vanger (Christopher Plummer) to investigate the disappearance of his niece Harriet, who has been missing for forty years. Henrik suspects that someone in his family murdered Harriet, and he allows Mikael to use the guest house on the Vanger estate for the duration of his investigation. Helping Mikael is punk computer hacker Lisbeth Salander (Rooney Mara), a bisexual ward of the state who joins in the search for a "murderer of women" because she's a sexually battered woman herself. What Mikael and Lisbeth uncover during their search for clues is a grissly trail of death wrapped around Nazism and the Bible which puts even their lives at risk.

Trailer of the 2011 Hollywood version

Beautifully shot, powerfully acted and breathlessly paced, The Girl With The Dragon Tattoo is almost as good a serial killer thriller as the genre's apex, The Silence of the Lambs. Dragon Tattoo's cinematography is breathtaking, its artful shots of a vast family estate during winter hinting at decades of family secrets buried in the snow. Daniel Craig is commendable not only for his skillful portrayal of Blomkvist, but also for accepting a part that turns the tables on the James Bond star, making him the rescuee rather than the rescuer this time. His rescuer is of course played by Rooney Mara, who secured a much-deserved Academy Award nomination for best actress as Lisbeth. Mara is a stunning and magnificent revelation as the bisexual computer genius-she even has a one-night stand in the film with an attractive woman who looks like a Filipina. One need only compare Mara's brief role as the schoolmate who broke Facebook creator Mark Zuckerberg's heart in last year's Oscar-winning The Social Network with her portrayal as the title character in The Girl With The Dragon Tattoo to see the astonishing range of her talent. Adding immeasurably to the film's many laudable qualities is the razor-sharp editing, which makes its 158 minute running time feel a lot shorter than it is.

Trailer of the 2009 Swedish version

Which brings me to a comparison of the 2011 Hollywood version with the 2009 Swedish version. Despite Fincher's movie being 8 minutes longer (and at least 10 times more costly to produce) than the Swedish movie directed by Niels Arden Oplev, my opinion is that Oplev told the story a little better than Fincher. Applying to Dragon Tattoo a trick he learned on The Social Network, Fincher makes his actors speak faster in scenes where there's lots of exposition, such as the one where Lisbeth enumerates to Mikhael the many victims of the serial killer suspected of murdering Harriet. I don't know about other viewers, but keeping up with Mara's rapid line delivery required some effort on my part. By contrast, I didn't have this problem with the equivalent scene in the Swedish version, which laid out the information at a pace which I was able to follow quite easily. (It must be said, though, that Fincher's Dragon Tattoo has been nominated for best editing at the Academy Awards.)

Also notable are the differences between the two versions in terms of cinematography. While the camerawork in Oplev's version made the Vanger island estate and the city of Stockholm look sinister and threatening, Fincher's equivalent shots are sometimes too pretty and perfectly composed for their own good, making his movie look like a travelogue in many instances. (Note that Fincher's movie is also nominated for best cinematography at the Oscars.)

In terms of story, the Hollywood version does away with the subplot about the closeness of  Harriet and her cousin Anita that was stated quite emphatically in the Swedish film. The ultimate fate of Harriet as revealed at the end is also substantially different in both films.

In terms of scripting, though, I would say that Steven Zaillian's screenplay for Fincher is more fun, with welcome touches of humor that the Swedish film didn't have. I don't even remember laughing once while watching Oplev's adaptation. In Fincher's movie, however, I had more than one good laugh. My favorite line was Lisbeth's advice to a bad guy to stop visiting tattoo removal sites, my favorite humorous incident the one where the good guys are staking out a suspect who does the last thing they expect her to do with her computer. 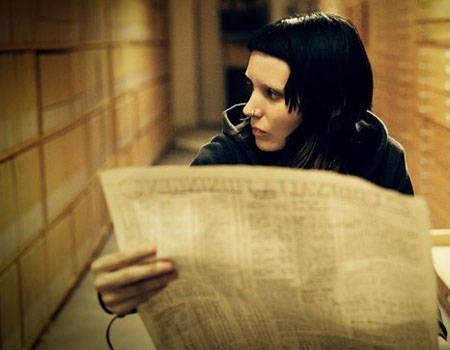 Acting wise, the two Lisbeths-Noomi Rapace and Rooney Mara- are equally amazing, both of them fully inhabiting the tortured heroine's pierced and tattooed body from start to finish.

In terms of direction, I'd have to say that I favor Niels Arden Oplev's grittier, more emotional approach to David Fincher's more polished but emotionally-distant handling of the material a little bit more. I remember being moved to tears by Oplev's resolution to the Harriet mystery, while Fincher's version of that plot element left me ice cold.

Check the movie schedule of The Girl with the Dragon Tattoo

The Girl With The Dragon Tattoo Moviereview