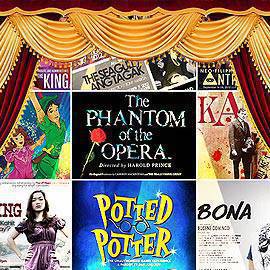 Plays to Watch This Month

The theater scene is alive this September! 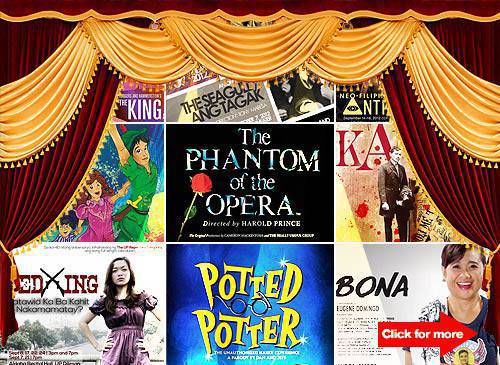 (SPOT.PH) If you missed out on last month's hit plays, don't fret. You may catch the law few shows of Potted Potter and Alamat: Si Sibol at Si Gunaw, and still snag tickets to the critically acclaimed Bona and Phantom of the Opera. While you're at it, check out some original productions by our own local theater groups.

Kanser
Theater group: Gantimpala
When and where: Sept. 1-2 (9am, 12nn & 3pm) at AFP Theater, Camp Aguinaldo; Sept. 7-9, (9am, 12nn & 3pm) at Star Theater, Star City Compound, Pasay City; Sept. 14-16, (11am & 2pm) at Cinema 3, SM Southmall
Cast: Jay Gonzaga as Crisostomo Ibarra, Cris Pastor as Maria Clara, Troy de Guzman as Elias, Marj Lorico as Sisa, Dante Balois as Pilosopo Tasyo, and Joe Gruta as Kapitan Tiago, Ku Aquino as Padre Damaso, Mosang as Doña Victorina, and Patrick Patawaran is Padre Salvi.
Synopsis: The longest-running Philippine theater classic is back with a stellar cast. Kanser is based on Jose Rizal's classic, Noli Me Tangere, which tackles the cruelty suffered by Filipinos under the Spanish friars during the late 1800s. The novel is woven around the love story of Crisostomo Ibarra and Maria Clara.
Ticket prices: P200
Purchase tickets via Gantimpala at (02) 998-5622

The Wizard of Oz
Theater group: Repertory Philippines
When: September 1 - December 16
Where: Various schools and corporate locations, including OnStage Theater, 2/F Greenbelt 1. Visit Repertory.ph and Ticketworld for the full list of dates and venues.
Cast: Cara Barredo as Dorothy Gale, James Stacey as Scarecrow, Hans Eckstein as Tin Man, Oliver Usison as Lion, Pinky Marquez as the Wicked Witch of the West, Rem Zamora as Uncle Henry and Secretary to Oz, and Liesl Batucan as Glinda.
Synopsis: L. Frank Baum's masterpiece comes to life with Repertory's interpretation of the magic of Oz directed by Baby Barredo and Menchu Lauchengo-Yulo. When a tornado whisks Dorothy away from Kansas to the land of Oz, she goes on a quest to find the mighty wizard who has the power to send her back home. In her journey she encounters unique characters such as the Tin Woodsman, Cowardly Lion, and the wicked Witch of the West. Not to be confused with the hit MGM film, this local version of Wizard of Oz does not include songs from the original 1939 fantasy film.
Ticket prices: P600, P500, and P350 for OnStage showdates
Purchase tickets via Ticketworld and Repertory

Ped Xing: Tatawid Ka Ba Kahit Nakamamatay?
Theater group: UP Repertory Company
When: Sept. 8, 17, 22 & 24 (3pm & 7pm) and 7 & 21 (7pm)
Where: Aldaba Recital Hall, UP Diliman, Quezon City
Synopsis: Five ordinary people plot a scheme to assassinate their town mayor, but their plans are foiled when a friend betrays the group. This action/comedy play uses UP Rep's signature style of performing, the Tula-Dula.
Ticket prices: P180 for UP students. P250 for non-UP students.
Purchase tickets via Serville at 0917-600-0161

The King and I
Theater groups: RWM, Manila Philharmonic Orchestra, and Philippine Ballet Theater
When: September 15 - 30 (Fridays at 8pm, Saturdays at 2pm & 2pm, and Sundays at 2pm)
Where: Newport Performing Arts Center, Resorts World Manila, Pasay City
Cast: Leo Tavarro Valdez as the King and Monique Wilson as Anna
Synopsis: Originally staged in Broadway in 1951, The King and I is the fifth masterpiece of renowned theater writing duo Rodgers and Hammerstein. The musical tells the story of a widowed English schoolteacher, Anna Leonowens, who travels to Siam to serve as a tutor of the King's children. One of Anna's tasks is to introduce modernity to the kingdom, but the relationship between her and the King becomes conflicted, especially when neither is able to express their growing love for each other.
Ticket prices: P2,400, P2,000, P1,600 and P1,000
Purchase tickets via Resorts World Manila Box Office or Ticketworld