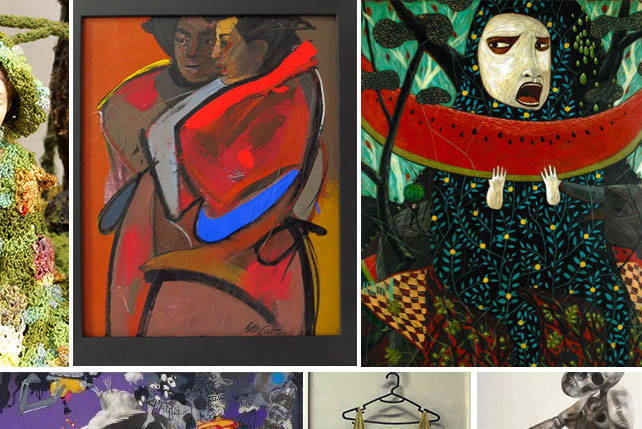 Who sold a piece for P46 million, and who uses plates as art? We give you the lowdown. 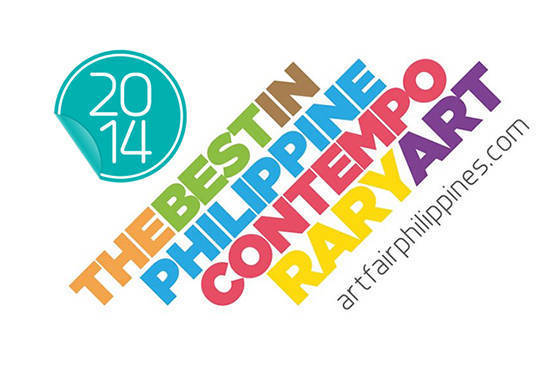 (SPOT.ph) We can list 10 things we’re excited about, but we thought that perhaps it’s better to help you feel enthusiastic about Art Fair Philippines 2014 instead. Walking around a museum can be a terrifying experience, especially when people keep murmuring about who or what they like while everything is completely new to you.

"Art appreciation" is the subject of academic lectures and exhibits often cater to the needs of a wealthy collector, but underneath all of that, let’s not forget that art is for everyone because it’s everywhere. It’s pretty much anything that you personally think is beautiful and something that touches you.

We’re going to equip you with some basic knowledge on the featured artist of this year’s exhibit to help you better appreciate these local artists who are putting us on the map in the art world. One of them has a piece that sold for P46 million at a Sotheby's auction, one of them makes more than "fine" porcelain dinnerware, and one is a National Artist. All of them have exciting things to offer. Read on and get to know them a little better.

Suggested read: Fake It Like You Know It: The SPOT.ph Guide to Art Appreciation 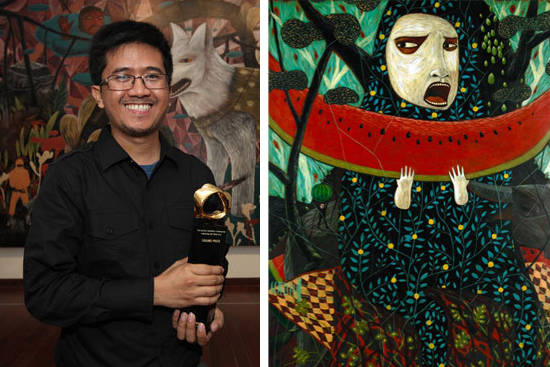 Tapaya’s work is characterized by narratives depicting folktales from the pre-colonial era and he’s on our list of Top 10 Most Succesful Young Visual Artists in Manila. Since our feature in 2010, he has done solo exhibits in Germany, China, Singapore, and Japan. He also won the  Asia-Pacific Breweries Foundation and Singapore Art Museum Signature Art Prize for Baston ni Kabunian, Bilang Pero di Mabilang (Cane of Kabunian, numbered but cannot be counted). 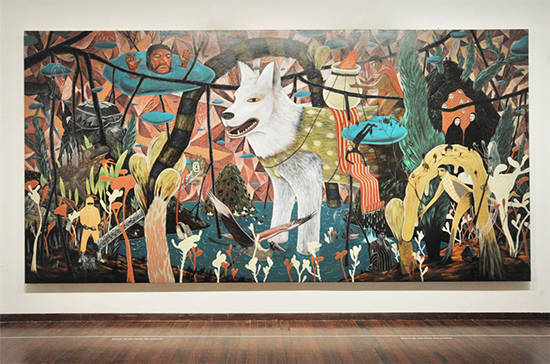 Quick art guide: He’s famous for his mural-like paintings that feature a lot of symbolism from nature (animals, trees). It’s a little similar to Mexican folk art, but with subdued hues. Tapaya also makes dioramas but he retains the images of magic realism in whatever medium he chooses. He has done a tribute portrait for Gabriel Garcia Marquez, and thus, if you’re into the themes we have in common with Latin America (brought by the colonial era), Tapaya’s art will speak to you.

What to expect at Art Fair Philippines 2014: Installation art, a shift from his usual murals, but it will nonetheless feature the most prominent element that has defined his work: narrative from folktales. 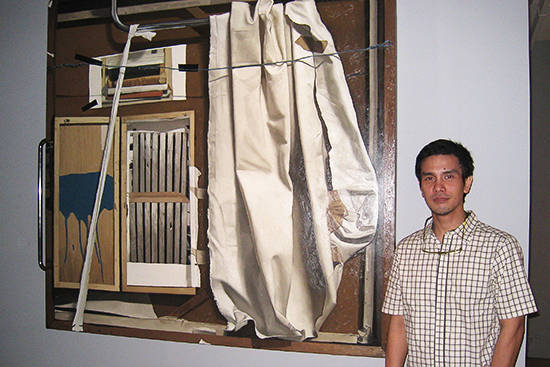 Santos at his {Un}common exhibit in 2009. Photo from Manila Art Blogger.

In 2011, his work "Paper Dolls" sold for more than P6 million at Christie's Auction in Hong Kong, which means, that despite his lanky appearance, he is no featherweight in the art world. His work has been exhibited in Kuala Lumpur, New York, Beijing, and Copenhagen. His most recent show was held locally at the BENCAB Museum in Baguio City, but his pieces always go beyond oceans. (P.S. He is one of the founders of Art Informal.) 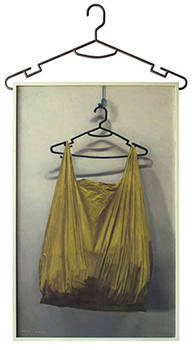 Quick art guide: Santos redefined objectification and puts an upper case "A" on the art of found items. In his hands, things we see daily become talking pieces.

What to expect at Art Fair Philippines 2014: This year, Santos revealed to Irwin Cruz of Town & Country that he worked on "100 resinated drawstring bags, fashioned from canvas flour sacks used by a bakery." The installation art is a testament to Santos’ ability to find beauty in simple things...and share what he sees with us, of course. 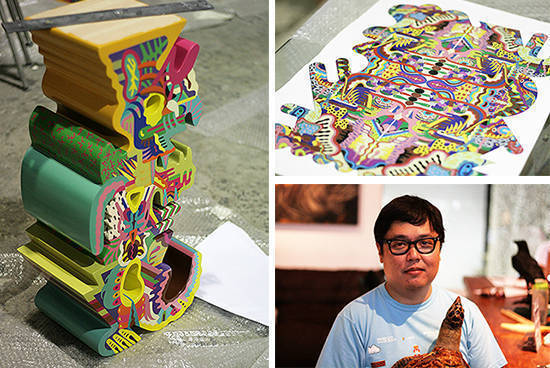 We paid him a visit at his studio to check out his work. He’s a fan of, in his words, piecing things together to create something that seems ugly but has a strange sort of beauty to it. Check out our feature on him for the gritty details.

What to expect at Art Fair Philippines 2014: "Fun," Cordero told us. And we believe him! 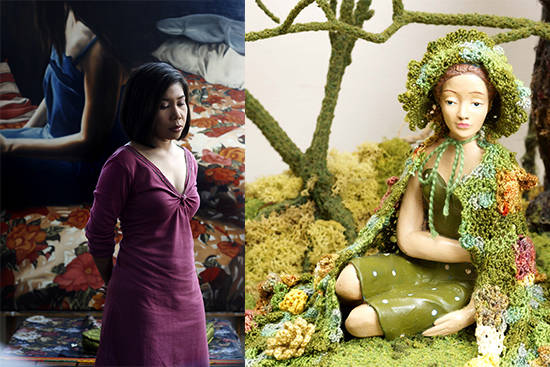 Photo of Geraldine Javier by At Maculangan. On the right, "Madame A and the Hungry Bear" (intermedia, photo from Vargas Museum).

She studied to be a nurse but became an artist instead-with shows from Singapore to Berlin. Javier is also part of our Top 10 Most Succesful Young Visual Artists in Manila back in 2010, and she hasn’t shown any signs of slowing down. She recently had her second solo exhibit at Arario Gallery in Cheongdam, South Korea, where she presented a combination of paintings on canvas and knitted installation pieces. 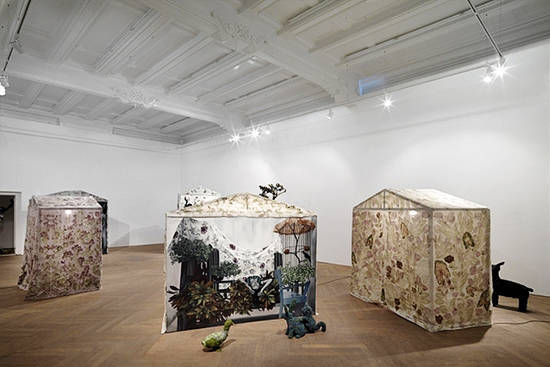 Is this what’s waiting for us at the Art Fair? (Photo from HiFructose.com)

Quick art guide: In her recent local exhibit, Curiosities, held at the Vargas Museum on April 2013, her fascination for death and the symbols that come with it were prominently featured. She’s a master of deliciously dark imagery, presented through oil paintings and installation art.

What to expect at Art Fair Philippines 2014: A tent. Yes, a tent. Her art comes with its own home. 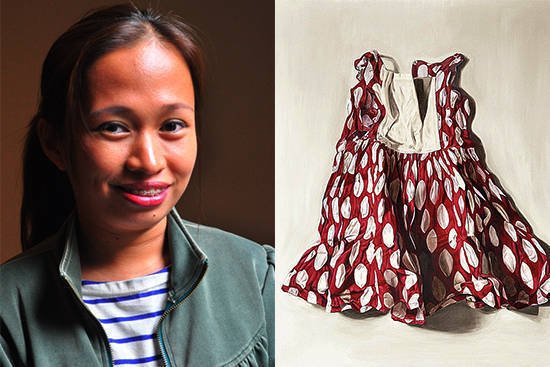 On the right, "When Sonia was Five" (acrylic on canvas, photo from Invaluable.com)

Her works have been featured in different countries, from Singapore to Beijing, but in November 2013, Marina Cruz gave a touching TED Talk on adoption that gave new meaning to her paintings of children’s clothing. Those who hear her name might associate her with the framed dresses, but after her talk, Marina Cruz proved that there’s more to it than meets the eye. 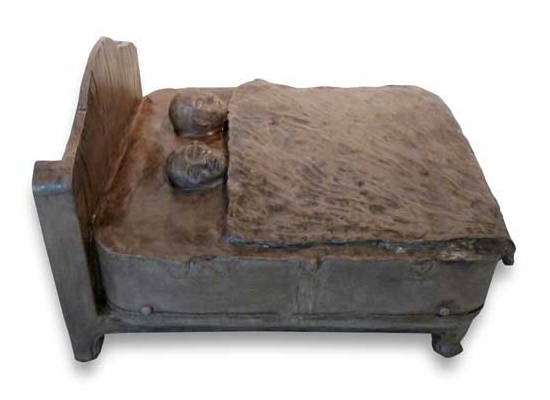 What to expect at Art Fair Philippines 2014: "A catalog of my interests," Cruz told Irwin Cruz for Town & Country. Expect paintings, sculptures, wall-bound objects, and dollhouse dioramas. She’s bringing out the big guns. 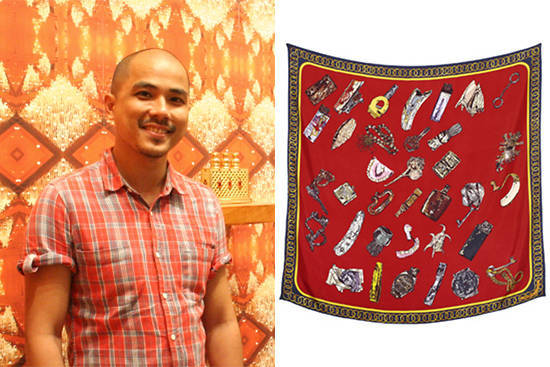 Pio Abad from WhiteWallMag.com. (On the right, silk scarves from ArtSlant.com)

Abad is based in London and has been living in Europe for the past nine years. This means that he probably has drunk more tea than us, but it doesn’t mean that he’s disconnected to the art scene in Manila. He held his first local solo exhibit at Silverlens Gallery in Makati from October to November of 2013 (Every Tool is a Weapon if You Hold it Right), coming home after being a part of a special series of exhibitions by the Zabludowicz Collection in the United Kingdom. 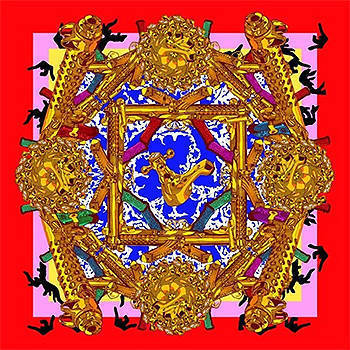 Quick art guide: He has worked with silk scarves and, surprisingly, plates. Like his peers, he isn’t limited to one medium. The pieces featured in the Zabludowicz Collection presents post-Marcos Philippines in jarring ways. Abad explains that more than looking at Philippine history, the theme behind his art is "ideologies contained in banal objects."

What to expect at Art Fair Philippines 2014: Save the Art Fair date if you want to check out his silk-screen scarves and graphic wallpaper. 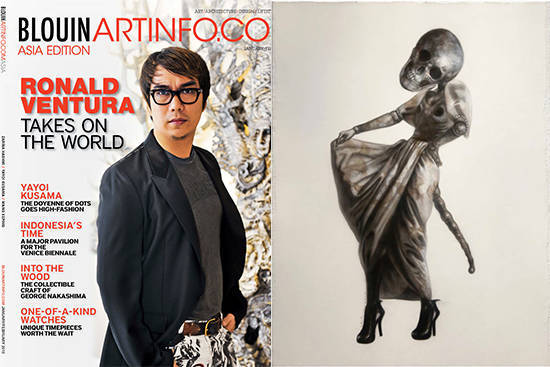 Spain, Milan, and Jakarta are just some of the place that have been treated to Ventura’s art. In 2012, Ventura was  featured on the cover of the November/December issue of Flash Art magazine, reaffirming his status as one of the best artists in Southeast Asia. He’s scheduled to have another show in 2014 at the Tyler Rollins Fine Art gallery in New York. Busy, busy man. 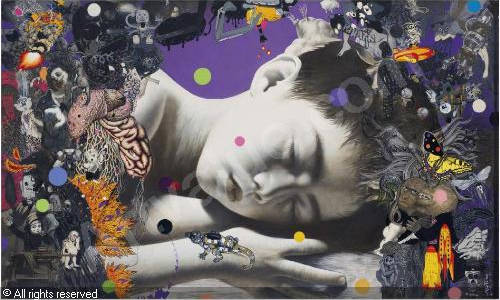 Framed by Ronald Ventura, which sold for $135,000 at the Sotheby's Modern and Contemporary Southeast Asian Art Paintings auction in 2012. (Photo from ArtValue.com). It’s not surprising as his work, Grayground, sold for more than P46 million in 2011.

Quick art guide: Modern and somewhat dark, Ventura plays around with fiberglass on resin and oil on canvas to create haunting images that might leave you pondering about your existence. You’ve been warned. He’s numero uno in our Top 10 Most Succesful Young Visual Artists in Manila, and, quite obviously, his success has reached places beyond our shores.

What to expect at Art Fair Philippines 2014: His sculptures were at the heart of last year’s show, so expect something bigger! 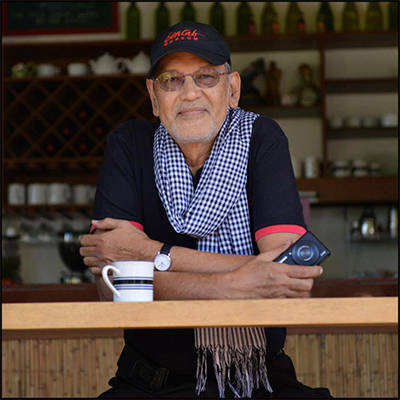 He received the rank of National Artist for the Visual Arts in 2006, so you should know who this man is (by name, at the very least). He has a museum in Baguio, which features his classic works, including those inspired by his muse, Sabel. He has enjoyed great success in both Eastern and Western worlds as a painter. You’ve probably heard of him, and if you have yet to see his works, now’s your chance. 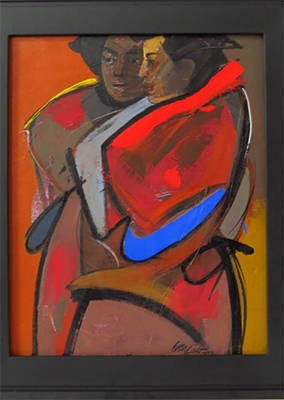 Quick art guide: His career has spanned decades and he’s accomplished much with a paint brush. Portraits, nudes, squiggly lines, and...well, pretty much everything.

What to expect at Art Fair Philippines 2014: "Never-before-seen bronze and metal sheet structures." We can’t wait.

Art Fair Philippines runs from February 20 to 23 at 6/F and 7/F of The Link, Parkway Drive, Ayala Center, Makati City