Catch the Tony Award-winning musical The Bridges of Madison County live in Manila
Loading
Already a member? Log in
No account yet? Create Account
Spot.ph is your one-stop urban lifestyle guide to the best of Manila. 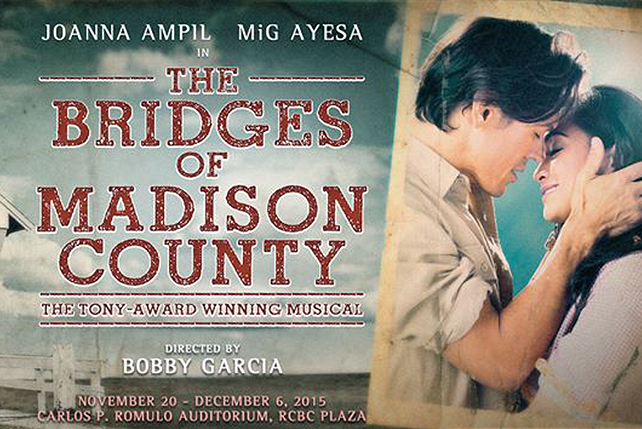 (SPOT.ph) The Tony Award-winning musical The Bridges of Madison County based on the best-selling novel by Robert James Waller serenades Manila this month. The show is produced by Atlantis Theatrical Entertainment Group (ATEG) under the direction of Bobby Garcia. Two powerhouse Filipino performers of the international musical theater stage lead the cast: Joanna Ampil as Francesca Johnson and MiG Ayesa as Robert Kincaid. The show runs until December 6 at the Carlos P. Romulo Auditorium.

The Bridges of Madison County is the romantic story of Francesca, a housewife in Iowa, and her whirlwind romance with a travelling National Geographic photographer, Robert. The show features the musical scoring of renowned composer Jason Robert Brown, which Ayesa describes as “so breathtakingly beautiful it has to be considered a modern classic, and well deserved of the Tony Awards it received.”

The Bridges of Madison County will be Ampil’s first musical in Manila after a long hiatus. She’s known for playing in West End as Kim in Miss Saigon, Mary Magdalene in Jesus Christ Superstar, Eponine and Fantine in Les Mis, and Christmas Eve in Avenue Q. She has also played Maria in The Sound of Music. MiG Ayesa, on the other hand, has performed on Broadway as Stacee Jaxx in Rock of Ages.


You can purchase tickets from TicketWorld.

Bobby Garcia Joanna Ampil Mig Ayesa Musical Musical Play Performing Arts The Bridges Of Madison County Theater
Your Guide to Thriving in This Strange New World
Staying
In? What to watch, what to eat, and where to shop from home
OR
Heading
Out? What you need to know to stay safe when heading out