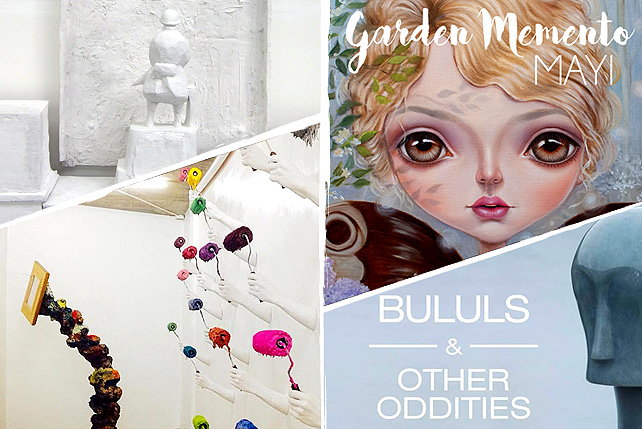 10 Art Exhibits to See This February

It's National Arts Month and we have a selection of shows that are sure to keep you riveted. 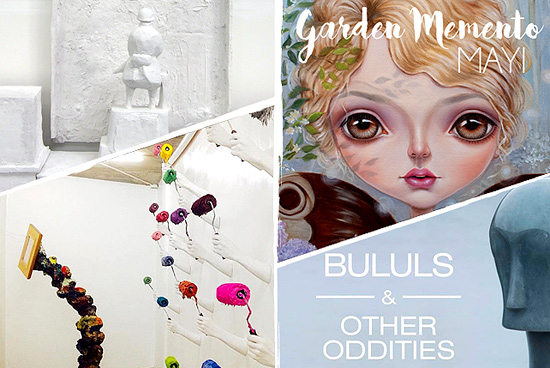 (SPOT.ph) February is not only Love Month, it's also National Arts Month! What better way to celebrate it than by checking out as many exhibits as you can (with or without a date)? 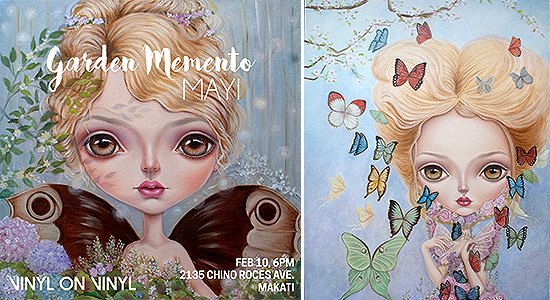 Mayi (Mayi Peñaflorida) revisits the secret garden inside her head in her solo exhibit, Garden Memento. Known for her big-eyed dolls (think Tim Burton's Big Eyes) and whimsical style, Mayi beautifully portrays the fairies, nymphs, and angels in her own bubble. These charming faces reflect the artist’s fascination with art as a child and how she was afraid to show it to the world then. The exhibit proposes that the longer the imagination is kept hidden, the more it flourishes.

The exhibit opens on February 10 at Vinyl on Vinyl. 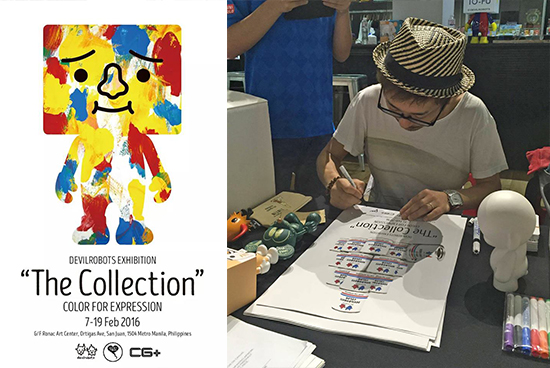 DEVILROBOTS, a design team of five from Japan, is in the Metro to launch their toy and painting exhibition, The Collection. Established in 1997, DEVILROBOTS specializes in graphic and character design, illustration, motion graphics, and web design. They are also the creators of the TO-FU Oyako!, one of Japan’s most popular contributions to the toy world. The group develops their works based on the concept of “cuteness and blackness.”

The exhibit runs until February 19 at Secret Fresh Gallery. 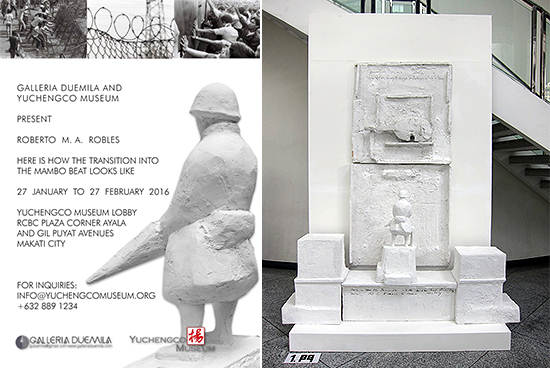 Here is How the Transition into the Mambo Beat Looks Like

To celebrate EDSA People Power Revolution’s 30th anniversary this February, Galleria Duemila and Yuchengco Museum highlight a conceptual art installation by Roberto M.A. Robles entitled Here is How the Transition into the Mambo Beat Looks Like. Robles channels his own sentiments and personal fight for democracy, as represented in the exhibit by events and symbols of Martial Law and the EDSA People Power Revolution. According to the artist, the exhibition is “moving, in transit, still to the beat, to emancipation.” The repetition, like the structure of Mambo music, follows the “ups and downs toward nationalism.”

The exhibit runs until February 27 at the Yuchengco Museum. 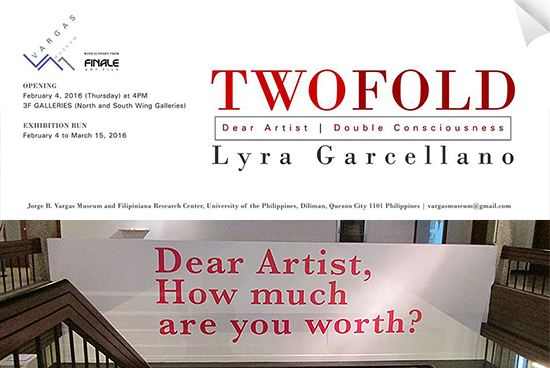 The art market may be seen as a place of capture and redistribution. How does an exasperated artist mediate this market with productive critique? Lyra Garcellano seeks to answer this in her solo exhibit, TWOFOLD: Dear Artist | Double Consciousness. Garcellano displays works that explore the institutions of the market and the wider ecology of which it is a vital part. The showcase takes a textual approach, a kind of direct address to the viewer.

The exhibit runs until March 15 at Vargas Museum.

Vargas Museum is at Roxas Avenue, University of the Philippines, Diliman, Quezon City (vargasmuseum@gmail.com or 928-1927). For more information, visit the Vargas Museum’s website.

Michael Lin: Locomotion is Michael Lin’s first solo exhibit in the Philippines. His name is internationally known for his site-specific projects, some of which have redesigned unusual places like a bookstore, a tennis court, a community hall, and an atrium, among others. For Michael Lin: Locomotion, the artist envelops the walls of the museum with a fluid floral arrangement. Lin gets inspiration from Manila’s urban landscape, specifically from pedicabs, which he considers “an emblem belonging to a homegrown subculture of folk art.” Pedicabs are decorated with the same pattern as the walls, thus metaphorically and physically extending the galleries to the community.

The exhibit opens on February 18 at the Museum of Contemporary Art and Design.

Bibliophilia: Our Connection to Nature

Bibliophilia: Our Connections to Nature is a solo exhibit by Jewelle Yeung, curated by Collective 88 Art. According to the artist, her work explores the connections of nature, using the essence of birds in motion as a way to capture the idea of “dramatic change.” Yeung hopes that her work's familiarity, as well as its uncertainty, triggers the viewer's instinct and emotion.

The exhibit opens on February 11 at A SPACE Manila. 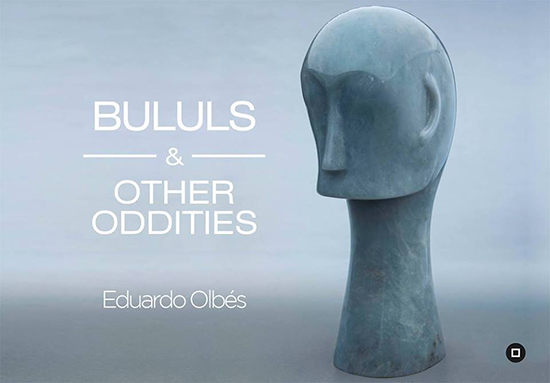 In Philippine history, the Bululs represent the guardian figures that watched over all cultural areas, acts, and processes—they are the focus of Eduardo Olbés’ solo exhibition, Bululs and Other Oddities. The exhibit takes us back to a time when our culture was based on equality—both Malakas and Maganda were created from the simple splitting of the kawayan—no woman came from man belief. The Bulul has been in retreat in the country for at least six centuries but there are still places, like in the Cordilleras, where they exist.

The exhibit opens on February 11 at Silverlens.

Escape: I Love You Virus

Escape is a bi-annual exhibition by 98B in Escolta. This year, Escape: I Love You Virus makes use of a computer virus as its central theme, featuring local and international artists, and works that revolve around its different layers. Remember the “ILOVEYOU” virus (also known as the “Love Letter” or “LoveBug”)? This computer worm attacked millions of Windows personal computers worldwide back in 2000, and it was made by a Filipino based in Manila. Escape: I Love You Virus presents works that discuss how social, cultural, and political representations of ideas and arguments spread.

The exhibit opens on February 13 at G/F First United Building. 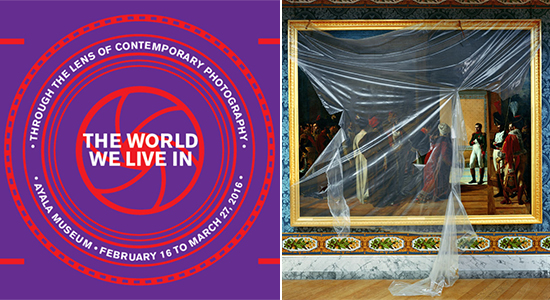 The World We Live In: Through the Lens of Contemporary Photography

Singapore-based Sundaram Tagore Gallery and Collective 88, in partnership with Ayala Museum, present The World We Live In: Through the Lens of Contemporary Photography, an exhibit that presents how contemporary photographers document and interpret the world we live in—creating images that are visually captivating, as well as stimulating and provocative. Five photographers represented by Sundaram Tagore Gallery in Asia are featured in the show: Sebastião Salgado, Steve McCurry, Robert Polidori, Edward Burtynsky, and Annie Leibovitz.

The exhibit opens on February 16 at the Ayala Museum. 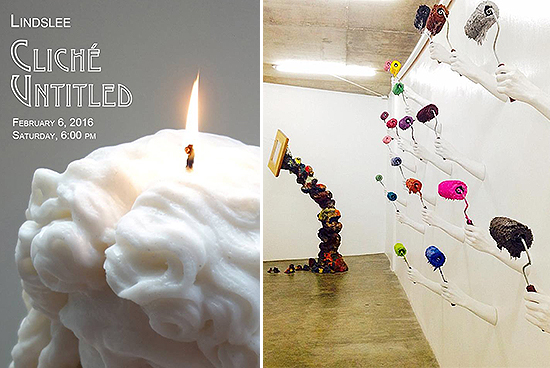 Lindslee (Lindsey James Alvarez Lee) presents an installation that relates to the question of a painting’s value today. Is it an “artwork,” an instrument of expression, a symbol of cultural position, or a commercial exchange? The artist’s thought-provoking installation is striking and distressed to portray the anxiety that comes with art in an age of “commodification.”

The exhibit runs until February 27 at Artery.