house I cards by Mica Cabildo and Stephanie Choi at the CCP
Loading
Already a member? Log in
No account yet? Create Account
Spot.ph is your one-stop urban lifestyle guide to the best of Manila. 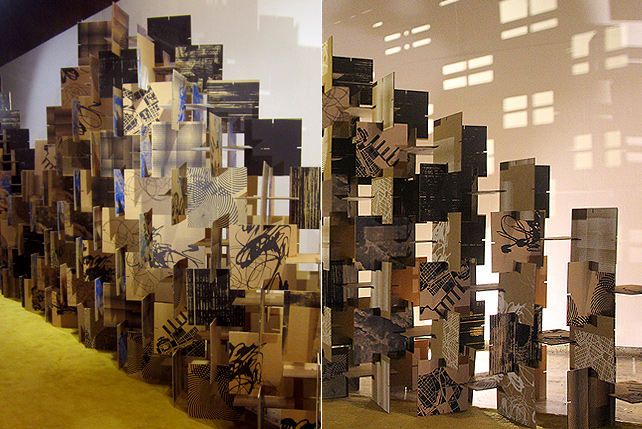 Super typhoons, maps, a house of cards + more at house I cards by Mica Cabildo and Stephanie Choi

The exhibit runs until May 22. 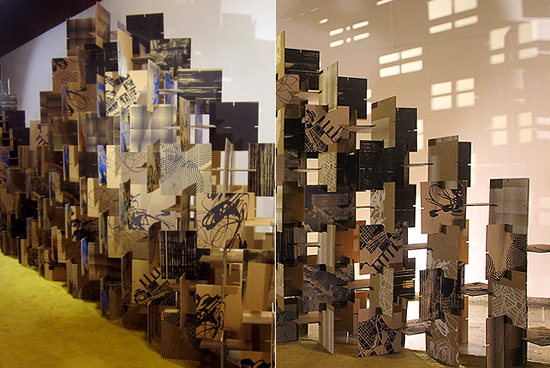 (SPOT.ph) The art installation is made of pieces of cardboard, each with a slit on its edges and then stacked on top of each other. The brown pieces have spirals, ink-like swirls, and grids screen-printed in blue, black, and white. Then they are arranged as though forming two mountains that tower above the viewer. This is what you can expect at house | cards by Mica Cabildo and Stephanie Choi at the Cultural Center of the Philippines, which runs until May 22.

This piece came together because of a divisive storm and collaboration. When Cabildo was on the second month of her fellowship for Visual Communications and Design at Akademie Schloss Solitude in Stuttgart in Germany, she heard about a Category 5 super typhoon that was about to hit the Philippines. She followed the news because she got worried about her family in Metro Manila, but she also became attracted to typhoon visualizations. Upon deciding to work on a project related to the storm, Cabildo asked Choi, an architecture fellow at the same institute, to collaborate with her.

They decided to use cardboard because it was easier to use compared to other materials like fabric, wood, or metal. Elisa Calosi, a coordination fellow, also suggested that a material that "looked a little rough" would be more appropriate for their project. 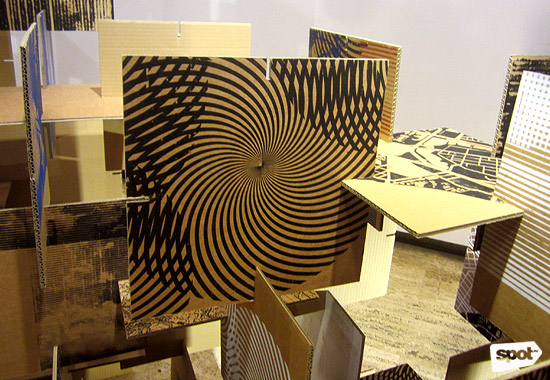 It also helped that Cabildo already experienced working on an exhibition with screen-printed cardboard boxes for a graphic design agency. "I had a rough idea of how colors would appear against the kraft tone, how it would be like to stack cardboard, and how the installation would stay over time," she said.

The original installation was a rectangular wall, which complemented the high-ceilinged exhibition space in Germany. For the exhibit at the Cultural Center of the Philippines (CCP), they built twin peaks because they didn’t have enough pieces to make a rectangular wall that was of the same length as the Little Theater Lobby, the space allotted for their exhibition. 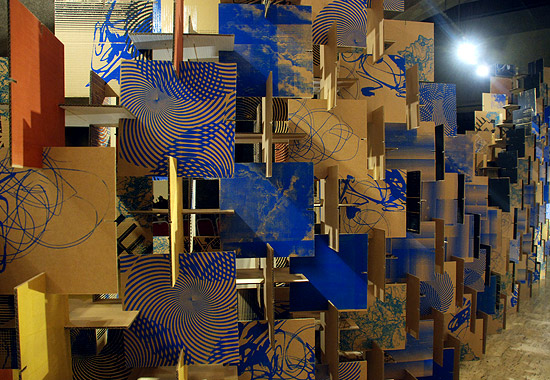 The result though still communicates their projects' ideas about storms, as the installation looks like a house of cards, an unstable structure that's vulnerable to the power of disruptive weather.

The most interesting detail comes in the screen-printed patterns on the cardboard pieces. Some are lines and spirals, which are actually weather graphic elements and map grids. The clouds are moiré patterns or overlaid identical patterns. "When layered together they can give a sense of movement," said Cabildo. 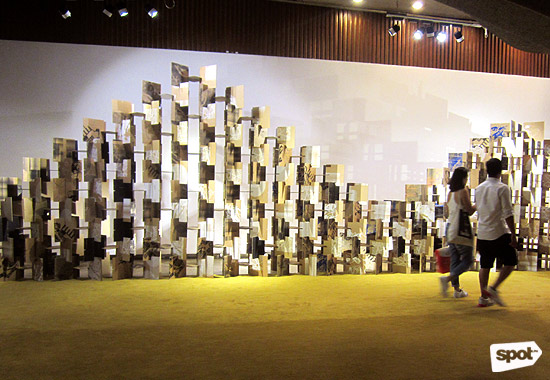 Lastly, they also included shapes from the maps of Manila and architect Daniel Burnham’s plans for Manila and Baguio. These plans are often lauded for their architectural genius, and yet, both cities have never been able to fully implement them. By including patterns from these maps, the installation doesn't just reference destructive storms, but also the possibilities of building a better city.

The CCP is at Roxas Boulevard, Pasay City. For more information, visit the CCP's website or the CCP's Visual Arts Instagram and Tumblr accounts.

Photos by Jasmine Agnes T. Cruz and courtesy of the CCP

Art Exhibit Ccp Mica Cabildo Stephanie Choi
Your Guide to Thriving in This Strange New World
Staying
In? What to watch, what to eat, and where to shop from home
OR
Heading
Out? What you need to know to stay safe when heading out