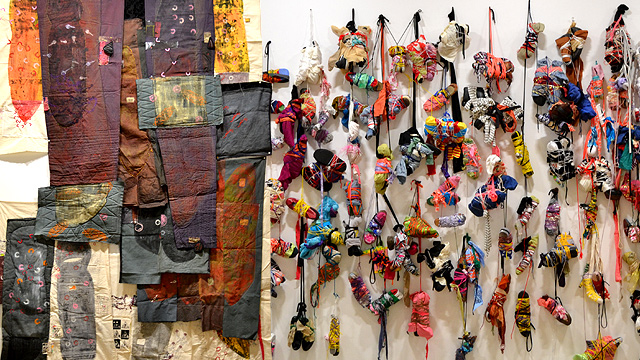 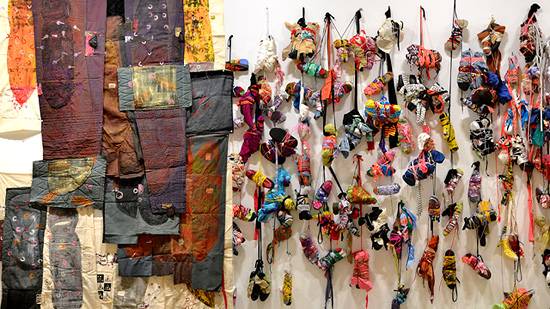 (SPOT.ph) New York-based artist Ged Merino has created colorful, life-sized sculptures wrapped with thread and zippers for his exhibit Transitional Objects at The Drawing Room Contemporary Art in Makati. Also in the gallery is a group show called Common Thread that includes other thread sculptures by Merino, huge crochet sculptures by Aze Ong, and thread portraits on paper by Raffy Napay. Both shows run until August 9. 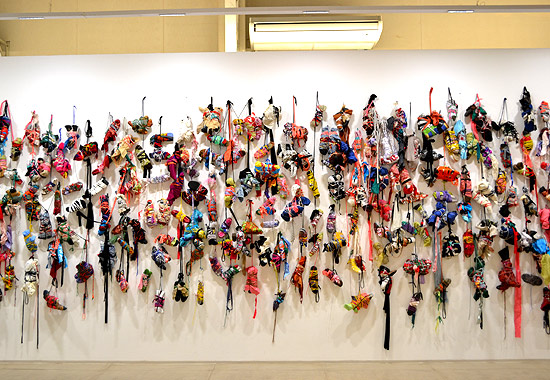 Shoes wraped within pieces of fabric and thread occupy one wall of the exhibit. It can have a startling effect: 350 pairs of shoes have morphed into different forms, a result of the artist's collaboration with an NGO in New York. The pieces came from a repurposing workshop which used old costumes from a theater company and discarded shoes as material. When the exhibit ends, Merino plans to unwrap the shoes and donate them to victims of Typhoon Haiyan (Yolanda). 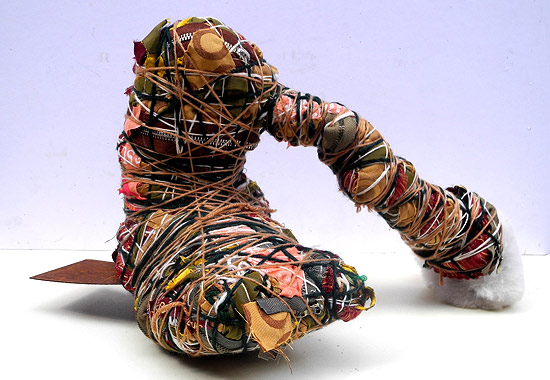 Merino attributes his interest in fabric to his mother, who used to embroider and dye pig's feed cotton sacks from his father's farm and sew them to make pajamas. "It was so funny how we would look forward to them," he said.

When he eventually moved to New York, he realized that he didn't have enough money to buy traditional art materials, but then he saw his closet and found so many objects he could use to make art. He had an overwhelming amount of shoes, clothes, and a teddy bear. The teddy bear piqued his interest, which he had kept since he was a child. He thought about how they were transitional objects, a concept in psychoanalysis that talks about how children use objects to gain independence from their parents. When the parents are not around, children cling to their teddy bears, a kind of bond with objects that some people still manifest in adulthood. 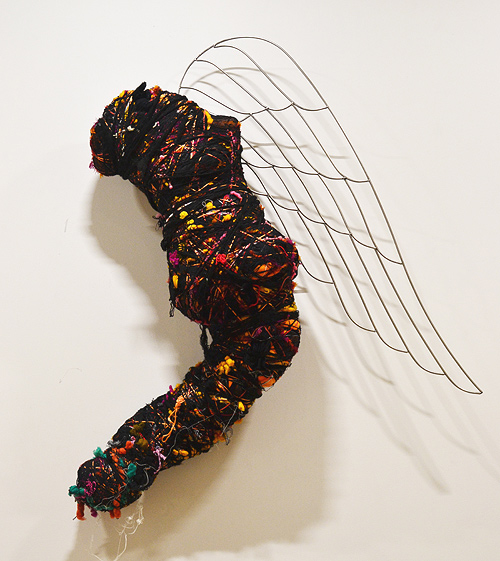 From the teddy bear, he began to wrap shoes. It was a joke he first told his wife: What if he wrapped his shoes with thread, and when the Martians come to Earth, they'll find this "artifact” and exclaim "They wore shoes?" Shoes could be connected to different things like traveling and leaving home. Merino says that every time New Yorkers find out that he’s Filipino, they immediately mention Imelda Marcos, who is of course known for her extravagant shoe collection. 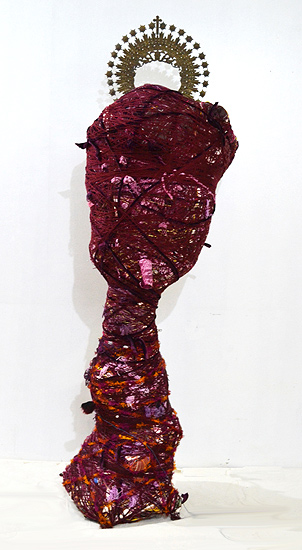 A portion of the exhibit also features mannequins that have been covered in thread and a smattering of shoes, foam, and other objects. On top of each sculpture are crowns that the artist bought from santo makers in Tayuman. He takes inspiration from a book that talks about a community that still worships damaged sculptures of saints. "I liked the thought that those saints were distorted and yet the community still found beauty in them," he says. The saintly pieces recall the time Merino first went to the U.S. and the first thing he bought was a figure of the Virgin Mary. It was as if the religious sculpture was his new teddy bear to help him deal with being separated from home. 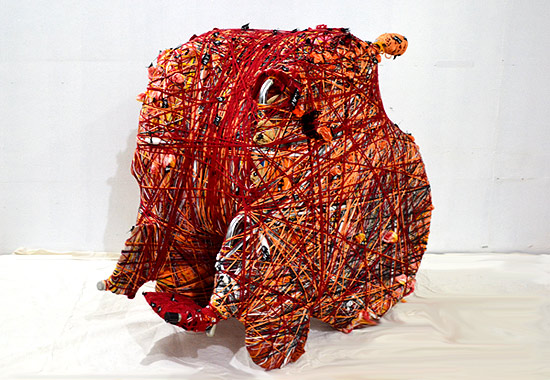 The ultimate transitional objects in the exhibit are those that were once owned by the artist’s mom, who passed away a month and a half ago. After her death, Merino wrapped her wheelchair and a few pairs of shoes. Fighting back tears, he says "It was very emotional.” The wheelchair was the last piece he created for the show.