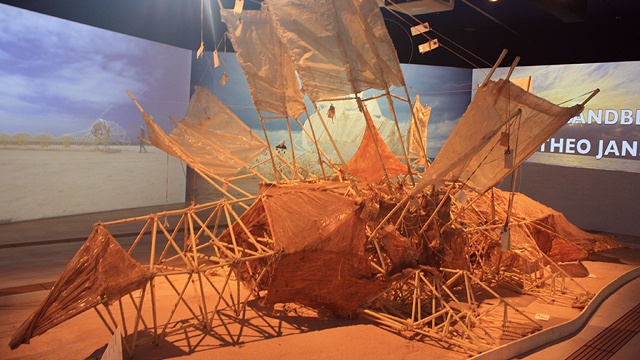 (SPOT.ph) When Dutch artist Theo Jansen started putting together large beast-like mechanisms from plastic pipes and bottles in 1990, little did he know that it would give birth to a whole series of self-propelled, wind-powered sculptures that resemble walking animals. He dedicated 28 years of his life to creating these strandbeesten (Dutch for "beach beasts," singular strandbeest), developing each "generation" and "breed" through his skills in art, engineering, and math. To celebrate this amazing feat, 13 of his large-scale creations are now on display at the Wind Walkers exhibit at the ArtScience Museum in Singapore until September 30.

The first strandbeest assembled from "yellow PVC tubes, satay skewers, and tapes" was Jansen's response to the Netherlands' rising sea levels, and the possibility of the "[reduction] of [their] national territory to what it was in medieval times." They were also made with recycled plastic bottles that can store air and sails that allow them to harvest more wind energy for walking. These "animals on the beach," according to him, are in charge of loosening sand in large quantities and throwing it into air to form dunes, create natural barriers, and protect the coastline.

From then on, he started creating plastic-made animals that he was able to identify in terms of taxonomy classifications. He came up with a total of 11 families, starting with his first beach animal, the "Animaris Vulgaris," under the Gluton classification. The timeline, so far, ends with the Bruchum family, which includes the first ever caterpillar-like strandbeest that could move, the "Animaris Bruchus Primas;" and the first caterpillar powered by the wind, "Animaris Mulus." It’s interesting to note that the Netherlands' yellow plastic pipes slowly fade to a white color when exposed to the sun, making it a useful method for determining the age of the strandbeesten.

The exhibit also showcases Jansen’s process of creating his liege of strandbeest, starting from his concept sketches and assembly materials to a computer he used in the '90s to crunch the numbers for his walking mechanism.

It seems that Jansen is not stopping his development of beach beasts anytime soon. His summers are often spent at his studio in Delft, near the ocean, where he sometimes takes the animals for a walk on the soft sand.

Strandbeest Theo Jansen Wind Walkers Exhibit Travel Art Singapore
Your Guide to Thriving in This Strange New World
Staying
In? What to watch, what to eat, and where to shop from home
OR
Heading
Out? What you need to know to stay safe when heading out