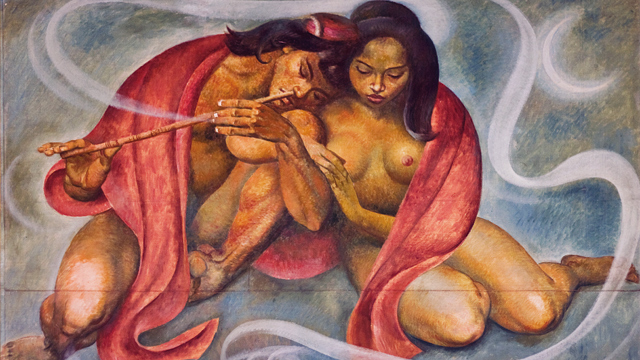 It's up for auction on September 8 at León Gallery.

(SPOT.ph) "Finally—a Botong. For the entire history of León Gallery, we have searched for a Botong of this great scale, beauty, and importance," starts León Gallery Director Jaime Ponce de Leon in the foreword for The Magnificent September Auctions 2018. The Makati-based arts hub has always put Carlos "Botong" V. Francisco's works on display or under the gavel; but this time, it's proud to present a rare piece flown in all the way from Hong Kong, which will be part of The Magnificent September Auctions 2018. The auction is on September 8, 2 p.m. at León Gallery in Legazpi Village, Makati City.

The Botong original titled "The Nose Flute" is to be sold in partnership with One East Larasati Hong Kong, which happens to be one of the premier auction houses in Southeast Asia. The mural-size work, measuring four feet by six feet, was commissioned by Aurelio Gomez Palileo, who had made the acquaintance of Francisco after World War II in the Philippines and became good friends later on. The masterpiece was later passed on by descent until it was sold off to a private Asian collector during the United Asian Auctioneers in Hong Kong on May 19, 2012. Starting bid for the upcoming auction is at P28 million.

"The Nose Flute" was inspired by a Filipino custom common in the northern mountain tribes of the Philippines. The kalaleng (or nose flute), an instrument of courtship, is used by inhaling through the moth and breathing out of the nostril to create soft, beautiful melodies. The red blanket also references a Cordilleran courtship dance, which begins with a pair of separate blankets that eventually become intertwined, symbolizing true love. Despite the focus on tradition, Botong gives another layer of meaning by putting a man and a woman side by side around the campfire—note that the girls in the north are not allowed to go near the boy's campsite (or ato) before their teens. This presents the artist's perspective gender equality as well as the importance of national identity, according to curator Lisa Guerrero-Nakpil.

Other pieces that will be auctioned off include Cesar Legaspi's "Workers," Jose Joya's "Carnival," Fernando Zobel's "Saeta 52," and Vicente Manansala's "Pila sa Bigas."

Makati Leon Gallery Art Carlos Francisco Auction Botong
Your Guide to Thriving in This Strange New World
Staying
In? What to watch, what to eat, and where to shop from home
OR
Heading
Out? What you need to know to stay safe when heading out