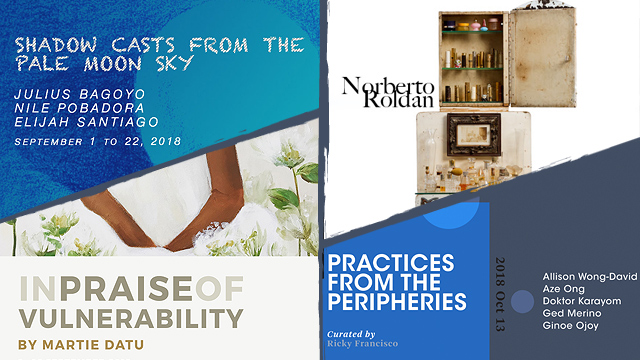 10 Art Exhibits to See This September

There's so much to see this month!

(SPOT.ph) The local art scene has seen a definite shift in recent years, consistently gathering momentum and attracting a more mainstream audience. What better way to celebrate this newfound interest for art than checking out a wide range of exhibits? For this month, we look at works that feature individual growth, as well as tribute exhibitions to Manila’s very own patrons of the arts.

People never reveal themselves with as much unguarded honesty as they do in their personal spaces. In Silid, artists dwell on the concept of a room as a place of growth and acceptance, where one bears witness to the passing of time and personal growth derived from failures, dreams, and successes.

no title (umbrellas) is a reconstruction of Roberto Chabet’s early kinetic installations which he developed in the ‘70s. For this exhibit, Nilo Ilarde and the King Kong Art Projects Unlimited reimagined the late artist’s immersive spaces through several black umbrellas that are weighed down with stones and hung upside down from plywood planks suspended from the gallery’s ceiling. This notion was inspired by French poet Comte de Lautréamont’s famous words: “[He is] as beautiful as a chance encounter between a sewing machine and an umbrella on an operating table.”

An Italian in Manila

An Italian in Manila is an exhibition tribute to Italy-born Silvana Ancelloti-Diaz, who celebrates her 43rd year as an art patron. Ancelloti-Diaz has organized many major exhibitions and retrospectives through the years. She supported the establishment of Galleria Duemila in 1975, and it's now considered the longest-running commercial gallery in the Philippines.

In Praise of Vulnerability

People often associate vulnerability with weakness without realizing that strength can come from having the courage to take risks even if one has no control over a certain outcome. Visual artist Martie Datu shares the role that vulnerability plays in the new chapter of her life: Motherhood. Her fourth solo exhibition is a celebration of how she found beauty in this quality, and is an invitation to restore the youthful optimism we had as children, in order to look forward to the promise of a better tomorrow.

Practices from the Peripheries

Practices from the Peripheries is conceptualized as an interchange of five solo exhibitions by artists and the exhibit’s curator, Ricky Francisco. Here, the concept of memory serves as a crucial facet of what ties meanings to the artists’ works, focusing on the ever-changing remembrance based on the context of who one is at the moment, up to the choice of what to remember and what to forget.

Resetting the Clock is a group show curated by Con Cabrera, who describes the exhibit as an ode to photography’s constantly shifting cycle and language. The artists present their different perspectives in viewing and creating a photographic image; displaying a diversity of output, process, and theoretical standpoints.

How can you jump over your shadow when you don't have one anymore?

Norberto "Peewee" Roldan is a multimedia artist and curator whose work offers commentary on the social, political, and cultural conditions of the country. In How can you jump over your shadow when you don't have one anymore?, he continues to touch on their respective state and circumstance in a skillfully crafted collage of the Philippine artistic landscape.

Strange Thirst, a new installation by Lani Maestro, features hundreds of painted pages in the manner of drawing in which the artist has engaged as a meditative gesture. The artist recalls her introduction to Japanese haiku during her early studies with conceptual artist Roberto Chabet at art school. This started Maestro’s fascination with light verse or light poetry, the relationship with word and image or the possibilities for words to become image themselves.

Quixotic Trolls and Shadow Casts from the Pale Moon Sky

Featuring the works of today’s emerging contemporary artists, these two adjacent exhibitions at Artery Art Space explore somnambulant reality and representation of the world. Shadow Casts from the Pale Moon Sky explore the monochromatic temper of light that's often absent in living objects. Quixotic Trolls, on the other hand, features how artists press the conventions of their craft with unfettered expression from the rote of tradition.

History of the Present

In History of the Present, Filipino-Canadian Jill Paz investigates the implications of repair and renovation by exposing layered complexities in her works. Upon her return to the country after emigrating in the '80s, she embraced the realms of both the intensely personal and the distant past by revisiting and reinterpreting the body of work of the late 19th century Filipino painter Félix Resurrección Hidalgo, her great grand-uncle and an important figure in Philippine art history.

Exhibit Metro Manila Art
Your Guide to Thriving in This Strange New World
Staying
In? What to watch, what to eat, and where to shop from home
OR
Heading
Out? What you need to know to stay safe when heading out