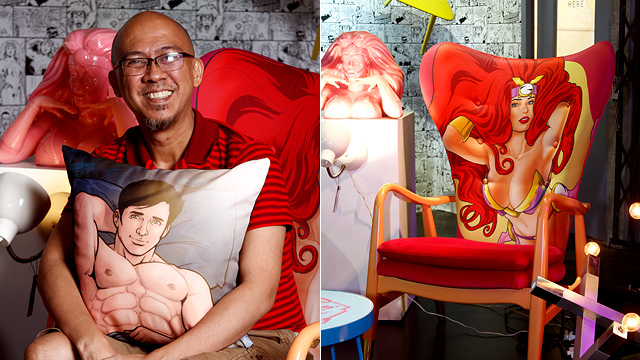 (SPOT.ph) When comic book character Zsazsa Zaturnnah was created by Filipino illustrator and graphic designer Carlo Vergara in 2002, the red-haired superheroine immediately attracted a cult fan base. The graphic novel Ang Kagila-gilalas na Pakikipagsapalaran ni Zsazsa Zaturnnah was adapted into a stage musical that ran for nine seasons and became an award-winning film. It's also been mentioned in academic studies not only dealing with art but also social constructs, specifically LGBTQ+ issues. The title was followed by a sequel entitled Zsazsa Zaturnnah sa Kalakhang Maynila. There's even an ice-cream flavor named after it.

To celebrate Zsazsa Zaturnnah's 16 years under the spotlight, local home store-slash-gallery Space Encounters is launching a new line of furniture pieces and artworks inspired by the colors and spirit of the heroine on September 7. The exhibit, aptly called Zweet Sixteen, runs until October 19.

Transforming the story of Zsazsa Zaturnnah into a set of furniture pieces has always been at the back of Vergara's mind since he first browsed through a certain collection of furniture designs from a foreign manufacturer. "He made furniture pieces na may comics panels on it. European comics. Then, I thought, 'Oh, this is nice.' But this was way, way back—2008, 2009," the artist recalls in an interview with SPOT.ph. He was still working as the Art Director of Real Living magazine back then.

Fast forward to 2017, he saw those pictures again. "All I wanted was a chair and a cabinet [for Zsazsa Zaturnnah], so nag-post ako sa Facebook," his narration continues. Through common friends on the Facebook thread, Vergara was introduced to Thor Balanon and Wilmer Lopez of Space Encounters. "That's how the convergence [started]. Tagging talaga. Social media is wonderful," he exclaims. The next thing he knew, "meron na silang mock-up ng buong space."

Lopez, who designs most of the furniture pieces, came up with more than a chair and a cabinet. There's a couch named after Dodong, coffee tables and throw pillows imbibing the bright and bold colors of Zsazsa Zaturnnah's world, neon lights that say "Shet, papa, shehht!" and "Isubo mo na!" (the context of which you would know if you've read the book), and pink-colored magazine rack and lamps. The black-and-white panels from the graphic novel were also turned into wallpaper that goes well with the vibrant furniture pieces.

"This is really so different, we really pushed ourselves. It's still mid-century but there's a mix of Carlo [Vergara]'s work. Before kasi it's internal lang, now it's different, there's collaboration. Na-push ang aming creativity because all levels e—from art to colors, to neon lights, to sculpture. 'Yong form din, nag-design kami ng bago to reflect the personality of each character," Lopez adds.

After finalizing the designs, Balanon thought of inviting artists for a group exhibit that matches the collection. "When we were making the furniture designs, iba-iba 'yong perception on how they see the characters, so what more pag 'yong artists. We wanted to see how they see Zsazsa in their own way, in their own style," he tells us. The lineup includes Norlie Meimban, Rene Cuvos, Merlito Gepte, Buen Abrigo, Burn Aquino, Fitz Herrera, JC Peñaflorida, Irish Galon, Amos Malayao, and Teofilo Alagao Jr.

When asked how he thinks Zsazsa Zaturnnah’s popularity went to such great heights, Balanon couldn’t have said it better: "It's difficult to pin down and I think that's the best aspect of Zsazsa Zaturnnah. When she transforms, all the labels don't apply. The comic book consciously goes into cliché and turns it around. When I reread it in preparation for this, relevant pa rin especially with what's happening—gender problems, identity, etc. It's still very relevant, parang it was just written a few years ago. I love that it still talks. The poor are still poor, these people are still marginalized, the same voice is still very important."

With darkness looming ever closer these days, Zsazsa Zaturnnah’s unparalleled strength and neon-colored optimism are things we can all still hope for.

Exhibit Art Carlo Vergara Space Encounters Zsazsa Zaturnnah
Your Guide to Thriving in This Strange New World
Staying
In? What to watch, what to eat, and where to shop from home
OR
Heading
Out? What you need to know to stay safe when heading out