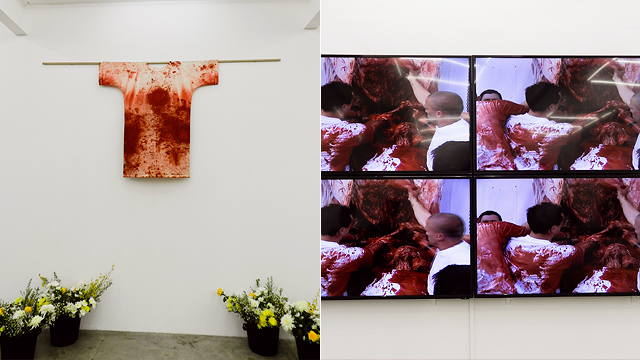 This Austrian Artist’s Bloody Exhibit Is Perfect for Halloween

It runs until November 17 at 1335Mabini in Makati.

(SPOT.ph) They say that art is nothing but an imitation of life. This is probably the reason why many popular works of art contain subjects that we can easily recognize: Landscapes, people, household objects. However, we can all agree that reality is often far from the pleasant images we always see on display. Hermann Nitsch, one of the most controversial artists of our time, is known to present gore in his creations; and for the first time ever, he’s bringing his works created between 1987 and 2010 to Southeast Asia. His exhibit titled The Orgies Mysteries Theatre runs until November 17 at 1335Mabini in Makati City.

Nitsch, who was born in Vienna in 1938, was associated with the Viennese Actionism, an artist movement that challenged issues in post-World War II Austrian society. Many of these issues, which included the participation of many Austrians in the Nazi regime, were considered taboo to discuss. Through art, Nitsch and his contemporaries created works that confronted the hypocrisy of a society disgusted at provocative performance art but unable to prosecute those who have committed war crimes. At the same time, they felt the restrictions and constraints of conventional abstract paintings in communicating their concerns. And so, many of their works used the human body as a medium—performing acts that involved intense action and disturbing movements to define artistic expression.

The scenes are hard to watch and stomach-turning but a sense of calmness is eventually felt while watching the bloody, troubling act. Imagine how it must be for viewers who have seen the live staging of The Orgies Mysteries Theatre, which was performed around the world more than 100 times between 1962 and 1998. It is important to note that Nitsch meant for the show to be experienced not only visually but also through other senses such as taste and smell. The performance is a celebration of life, a spectacle that opens up the sensual body and releases it into ecstasy. To reinforce this idea, 1335 Mabini launched the exhibit on October 20 with a bountiful feast, lechon included.

The rest of the gallery displays creations from Nitsch’s live-action painting performances in the past. Scenes show how he pours red paint mixed with animal blood directly on the canvas, then eventually smears it with his hands. Like the Dionysian ritual, the artist rhythmically circles the canvas—his own way of celebrating life grotesquely.

Hermann Nitsch Makati Exhibit Art Heritage Food
Your Guide to Thriving in This Strange New World
Staying
In? What to watch, what to eat, and where to shop from home
OR
Heading
Out? What you need to know to stay safe when heading out