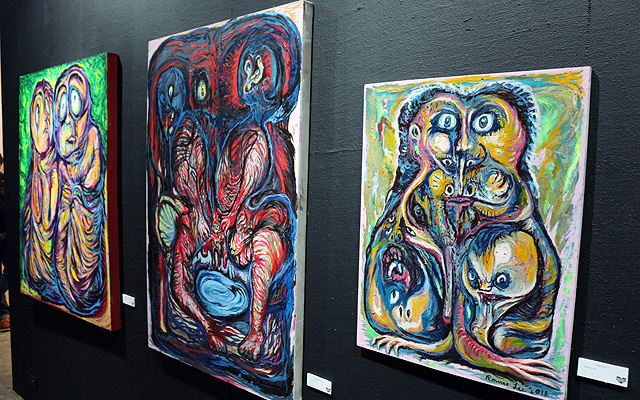 Romeo Lee's New Solo Show Is Still Out of This World

It runs until January 18 at Secret Fresh.

(SPOT.ph) If there’s something Romeo Lee’s fans can count on, it’s that the artist and Pinoy punk legend will forever march to the beat of his own drum. Four years after his last solo exhibit at the Secret Fresh Art Gallery in San Juan, he is back with Secretlee Fresh 2, which runs until January 18.

While Lee flits about in the country’s contemporary arts scene, he manages to produce work that deviates from the norm, painting just what he likes in his instantly recognizable style, not giving a damn what the critics or collectors might say.

In Secretlee Fresh 2, he explores familiar territory, with close to two dozen new canvases swirling with otherworldly themes—a realist, he is not. Along with the vivid ghouls, ghastly animals and other indescribable creatures are a series of nudes—many of them featuring women with Rubenesque behinds. With his happy-go-lucky demeanor, it’s hard to tell sometimes whether the artist is joking or not, but for this show, he claims his inspiration is being “in love.”

What cannot be debated is the influence of Bakekang, a recurring image in his body of work. A character in a Carlo J. Caparas comic, Bakekang is the clichéd ugly girl with the heart of gold. In one of Lee’s favorite paintings in his current collection, he puts Bakekang in the center of a recently cut down forest, stuffing something bloody red into her mouth as a full moon shines above. What does it mean? As usual, Lee is coy with his answer. Instead, he deflects the question into a statement about the show. What does he want to say? “Parang message ko ’to sa mga artist na ’di makapagpinta pag walang Internet, o sa mga collector na namimili ng mga realistic na pang-design sa bahay nila.” Oh, Romeo.