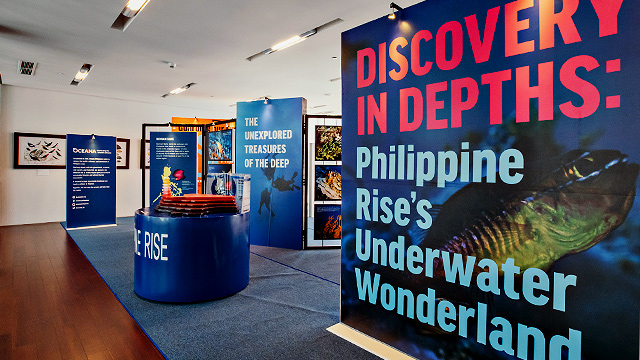 It's a fascinating, detailed look at the valuable marine reserve.

(SPOT.ph) Just off the east coast of Luzon is an underwater mountain known as the Philippine Rise (formerly called Benham Rise). Nearly as large as the Philippines’ biggest island, this expansive seamount is home to a pristine coral reef that is rich in biodiversity. Having recently explored its topmost part known as Benham Bank, the Philippine government and Oceana Philippines put together an exhibit to inform the public about their conservation efforts, and to inspire Filipinos to protect our seas. The permanent exhibition opened on January 20 on the sixth floor of the National Museum of Natural History.

The Journey Towards the Protection of the Philippine Rise is a collection of stunning underwater photographs and videos of the Benham Bank. The images were taken by a team of technical divers hired by Oceana Philippines to explore the 70-meter-deep, 17,000-hectare-wide area. The marine life captured in the photographs include fish, algae, sponges, and the little-known bryzoans (or moss animals) that are currently being tested for anti-cancer properties. Though deeper than most Philippine reefs, its pristine waters can still let sunlight through—making it home to rare corals, some of which have a lifespan of up to 900 years.

Also included in the exhibit is a 3D installation that shows the scale of Benham Bank in relation to the Philippine Rise (it is only 1% of the whole seamount!). Moreover, there is a timeline that audiences can walk through in order to learn about the government’s work in establishing the site as a nature reserve over the past two decades. This features the executive order that declares Benham Bank an official nature reserve, as well as other information about government-led conservation efforts.

Spearheading this exhibit and the Oceana Philippines’ campaign to inform the public about the Philippine Rise is marine biologist Marianne Pan-Saniano. Growing up in Aklan, Pan-Saniano was inspired at a young age to protect the environment. After graduating from the University of the Philippines – Los Baños, she decided to use her biology degree to save the seas and empower Filipinos to get involved. In fact, it was her who insisted that this exhibit be placed in the National Museum of Natural History. "I learned about conservation as early as elementary school, that’s why I really pushed for the exhibit to be in a public museum where students wouldn’t have to pay," Pan-Saniano says.

Ultimately, the aim of the exhibit is to encourage Filipinos to incorporate mindfulness of the ocean in their lifestyle. After all, the ocean is a major part of our food supply and local livelihood. The fact that Benham Bank is the only reef in the country that has 100% live coral cover means that the Philippines has the opportunity to play a big role in restoring the world’s largest ocean as long as we participate in its immediate protection. National Museum Director Jeremy R. Barns hopes that this collaboration with Oceana Philippines will "facilitate an experience that will hopefully have a lasting impact when [audiences] return to the world beyond the museum building."

It can be remembered that former presidential spokesperson Harry Roque caused an uproar in the Filipino academic community in January 2018 after saying that local researchers don't have the resources to join Chinese biologists in exploring our own deep waters. Critics slammed the public official and released a detailed list of all photographs and videos of Benham Bank produced by Filipino divers and scientists. As usual, Roque backtracked on his comment.

The Journey Towards the Protection of the Philippine Rise is a permanent exhibition at the National Museum of Natural History, Rizal Park, Manila. It is open from Tuesday to Sunday, 10 a.m. to 5 p.m. For more information, visit the National Museum’s website.

National Museum Of Natural History Benham Rise Exhibit
Your Guide to Thriving in This Strange New World
Staying
In? What to watch, what to eat, and where to shop from home
OR
Heading
Out? What you need to know to stay safe when heading out