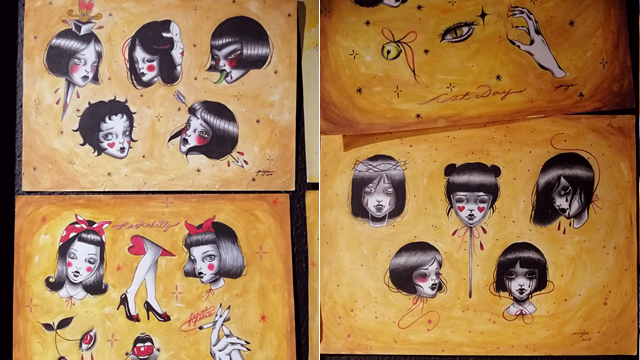 This Cool Exhibit in Makati Is Perfect for Tattoo Lovers

There's a space for cosplayers, too!

(SPOT.ph) Cosplayers, or people who don costumes and fashion accessories to represent their favorite fictional characters, often find like-minded individuals in seasonal comic conventions. But at Gallery in the Gutter (better known as GIG Gallery) in Makati, the performance art of cosplay calls for a different kind of art-fueled discourse through an exhibit titled Steel and Skin. It is placed side by side with tasteful tattoo designs in a show that runs until January 30.

Steel and Skin is a two-section exhibit featuring the recent works of London-based Filipino-German artist and props maker Johanna Lietz, along with tattoo artists Sophiya Franchesca and Neil Tanaleon. Displayed inside the gallery are realistic prop weapons made by kitbashing (or model bashing), a practice where a new scale model is a product of pieces taken from various commercial kits. Think of it as combining LEGO pieces from different boxes and not minding what’s written on the manual. Lietz also made use of laser-cutting, molding and casting, and 3D printing for her other pieces.

A graduate of Technical Arts & Special Effects from the Wimbledon College of Arts, Lietz felt an affinity to warriors in sci-fi films and video games as a child. She admired the intricacy of weapon and armor designs in massive role-playing games such as World of Warcraft.

For this show, she imagines her family as part of a realm where her father, mother, brother, and herself are warriors with their own set of customized weapons. It’s as if Lietz built an Alfred Pennyworth-like dungeon at GIG Gallery.

When asked about the sustainability of this practice in the local scene, Lietz says that while funding plays an important role in achieving a high-level quality of work in props making, the pieces she made for the show can be created with hand tools. But of course, this requires a lot of patience, time, and effort. She strongly suggests that anyone interested in learning about making props go to an anime or comic convention, adding that the Filipino cosplay community has the ability to become extremely creative and resourceful despite low-budget costumes and accessories.

Meanwhile, Franchesca and Tanaleon showcase the philosophy and art behind every tattoo they create. In a three-day festival that ran during the duration of the exhibit, they inked a few brave souls with their signature style of tattooing.

Franchesca grew up seeing a large dragon tattoo inked on her mother’s back. Since then, she became fascinated with art that can be made permanent on the body, going beyond paper and canvas. Her works consist mostly of images of women.

“I fuel my inspiration based on my own experiences, moments, or simply just feelings you felt once you play a song. Seeing people connect through my work, it feels nice. I think that is important. Letting others know that they are not alone facing the unknown,” she says in an interview with SPOT.ph.

To those who would like to become tattoo artists one day, Franchesca shares a bit of advice: “My mentors taught me that (in the tattoo industry), one must not only be artistic, but also mechanically inclined. Because, it is a highly technical medium where everything must be done properly. [From] the right machine tuning, the design, the execution of the tattoo on the skin, and down to the healing process. It's a craft that takes practice, diligence, dedication, and decades to get the hang of.”

These lessons all seem familiar to fellow tattoo artist Tanaleon, who has been professionally practicing since 2005. He also works with 55Tinta, a tattooing collective popular for inking celebrities and VIPs in the Metro. Tanaleon also has his own studio, Emblem Tattoo, where he explores his penchant for creating monochromatic and realistic images and designs that are often highlighted with tribal and oriental forms and patterns.