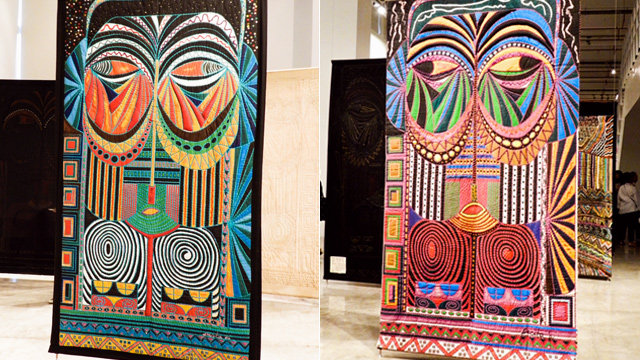 Her textile pieces are now part of their permanent collection.

According to an exhibit note by Clara Kim on Tate Modern's website, the works are part of a series that Abad worked on from the late 1970s to the early 1980s. They were referred to as trapuntos, which is Italian for embroidery or quilt. As someone born in Basco, Batanes, and an immigrant in the United States, she "never stopped being a gypsy" (according to her website). So the textile works were reflections of Abad's travels and encounters with the cultural traditions in Asia, Africa, and Latin America. They are also deeply rooted in the tradition of sewing and weaving, which are embedded in Philippine culture.

"They were made using large pieces of canvas onto which the artist stitched forms, creating a three-dimensional effect by stuffing the canvases and transforming their surface with paint, shells, buttons, beads, mirrors and other objects collected on her travels," Kim further explained. The "Bacongo" series was inspired by the Bantu ethnic group in Central Africa, while the "European Mask" was a commentary on how Western artists appropriate artistic traditions from indigenous people.

The three pieces are all purchased by Tate Modern with funds provided by the Asia Pacific Acquisitions Committee 2019.

Silverlens is also presenting some of Abad's selected works in the upcoming Frieze London, which is happening from October 3 to 6. This includes a selection of trapunto paintings from her "Immigrant Experience" series, which was produced in the early 1990s while she was living in Washington D.C. Multimedia artist Cian Dayrit, through 1335 Mabini, is also part of the international art fair.