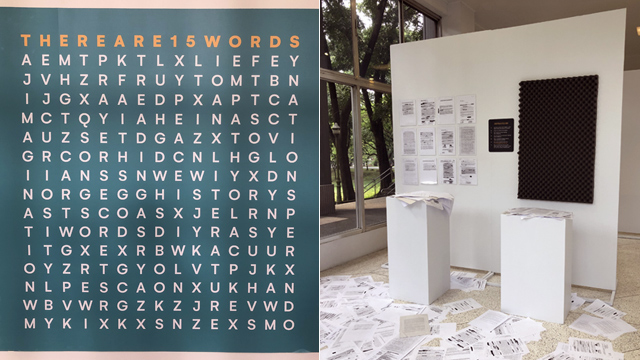 This Interactive Exhibit Highlights the Power of Words, Numbers, and Silence

It's a showcase of stories worth telling.

(SPOT.ph) Can you still recall the first time you visited a museum as a child? For some, the pieces that hung on the wall may have not meant much back then—they’re less amusing than the funny animations we watched on the television, after all. Non-profit organization Center for Art, New Ventures & Sustainable Development hopes to make museums more fun for kids through the exhibit Tumba-Tumba: Words and Numbers, which runs until October 15 at the University of the Philippines – Diliman’s Jorge B. Vargas Museum in Quezon City.

Center for Art, New Ventures & Sustainable Development’s (CANVAS) effort to redefine the concept of children’s museum started in 2018 with a proof-of-concept exhibit called Tumba-Tumba: Children’s Museum of Philippine Art. Tumba-tumba refers to the traditional rocking chair where our grandmothers would sit on while telling us stories—think Lola Basyang on her tumba-tumba while surrounded with her grandchildren. These storytelling sessions inspired CANVAS to come up with interactive shows based on children’s books that they also produce.

Tumba-Tumba: Words and Numbers takes things further by dwelling into the impact of words and numbers, not only to kids but to the society at large. It features three multi-sensory and interactive spaces crafted by Filipino artists Ioannis Sicuya, Marcel Antonio and Butch Dalisay, and Renz Baluyot.

"Ang Kahon ni Lola," which was created by painter and assemblage artist Sicuya, revolves around the story of Lola Nil who likes collecting various objects. Non, her grandson, attempts to help her find a small silver-plated box, which has gone missing from the house. Sicuya's clever use of epoxy and wood as a medium and interesting assembly of seemingly mundane items in the house make the exhibit very familiar to viewers, especially since the items range from dining plates to lottery tickets.

Expressive storyteller and painter Antonio highlights the power of literature through a TEDxDiliman talk that was delivered by esteemed writer Butch Dalisay in 2017. The clip titled “Why We Write, And Why We Read” is also playing on loop at the exhibit, while a written text is available for viewing.

Baluyot’s "Silent Witnesses" sheds light on the importance of history and its proper retelling—without revisionism. He reminds people to never forget the traumatic, shameful, and heartbreaking experiences of the Filipinos during the Martial Law era. Baluyot does this through an interactive installation that allows visitors to read affidavits from the survivors of one of the darkest periods in Philippine history. The first-hand accounts were also recorded and compiled on a podcast, which is played at the exhibition. In this way, the horrifying stories of abuse are echoed and told as how they are deserved to be treated—unsilenced and exposed.

"Silent Witnesses" hopes for parents and teachers to provide context and guidance to visiting children. While the young ones are often exposed to multimedia facets showing various versions of realities, the truth shall prevail and can never be masked with biases and revisionism.

Tumba-Tumba: Words and Numbers provides interesting insights on the huge impact of words and numbers—its power to tell and retell voices that are commonly heard, chosen not to be heard, and those of are silenced. It also highlights how words and numbers can be used to build dreams, save a nation, and express empathy. Lastly, the exhibit highlights the importance of unmasking important stories. In this case, the ugly truth behind the so-called "Golden Age" led by late dictator Ferdinand Marcos is unveiled as a testament of human rights violations experienced by our fellow Filipinos.