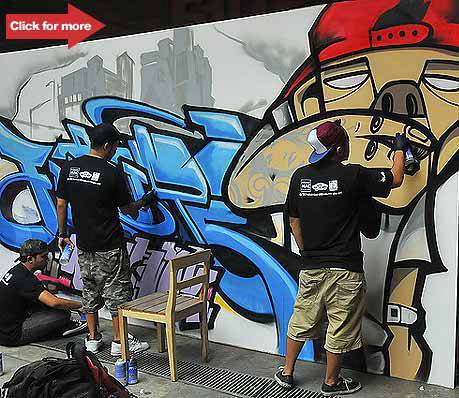 Later that day at The Collective in Makati, eight Philippine graffiti crews battled it out in Wall Lords for the chance to represent the country in Wall Lords 2010 in Shanghai to be held this month. PSP won the grand prize, followed by UGK-FTC and then MSF.

Capping off the first day of MDW, the official launch party mixed music and art at The Collective. Local acts Sandwich, Imago, Pedicab, Chillitees, Gaijin, Us-2 Evil-0, Duster, DJ Euric, DJ Rye and The Diegos performed songs from albums that feature Tara McPherson’s works of art. A selection of McPherson’s works was on exhibit that night at the Vinyl on Vinyl Gallery inside The Collective. MDW organizer Team Manila with 123 Klan and Jeremyville presented an exhibit of Bronx Sneaker Art at the Manila Remix Store. Attracting artists, designers and art enthusiasts, the night was studded with personalities like Graphika Manila speaker Danny Yount, fashion designer Mich Dulce, directors Quark Henares and Jun Sabayton and radio host Saab Magalona, among others.

Twenty-five of Manila’ style setters revealed bagfuls of secrets in the exhibit What’s in your Bag? on August 11 at Greenbelt 5 in Makati. Ornusa Cadness, KC Montero, Borgy Mantoco, Dyan Castillejo, Carlos Celdran, Tim Yap and more personalities shared the daily essentials in their bags as interpreted by lensmen Xander Angeles, Steve Tirona, Daniel Tan, JA Tadena and Revo Naval. Graphic designers Randell Centeno, Nico Puertollano, AJ Dimarucot, Ramon Vizmonte and Dan Matutina, plus the School of Fashion and the Arts and Make Up For Ever also collaborated for the exhibit.

Today, August 12, student artists and designers will take a stand in Digital Voice by creating graphic designs for a freedom wall at Glorietta 5. Afterwards, Power Mac Center and SHIFT (School of Intermedia, Film and Technology) will conduct seminars on poster design; Turbo Goth, Techy Romantics and Team Manila will perform; and online project Big SHIFT will be launched.

For the MDW finale, go to Cubao Expo in Quezon City on August 13 for a night of music and design tribute to ’70s Filipino rock in Manila Sound Vision. Mixing the old and the new, there will be a vinyl-inspired exhibit plus the launch of new music videos of Urbandub, Up Dharma Down, Greyhoundz, Sinosikat? and Razorback. Watch for performances by Imago, Techy Romantics, Caliph8, Sideshow, Gaijin, DJ Arbiewon, DJ Switch Trick, DJ Stolen Kisses and DJ Guadakomeda.